David Winner’s darkly satirical third novel, Enemy Combatant, takes us to the Caucasus region during the second Bush administration, where longtime friends set off on a misguided mission to infiltrate a CIA secret prison. The action is propulsive, the narrative surreal and deeply unnerving. Haunted by recent loss, adrift in an unfamiliar land, the character’s desperate moves unwind hypnotically, their consequences in turns tragic and absurd. 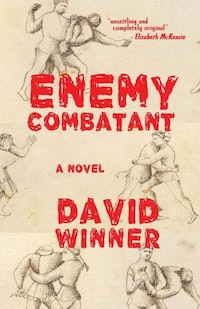