Gen was of course an icon, a cult music figure, a “cultural engineer,” the founder of TOPY, COUM Transmissions, Throbbing Gristle, pandrogyne, etc., all of which I’ve written about and documented elsewhere, but s/he was also a vulnerable human being like the rest of us, one whose generosity and courage as such is just as mythic to me as the life s/he lived in the public eye. 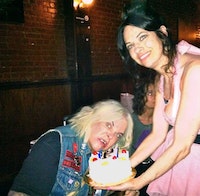