The Fat Kid by Jamie Iredell

Jamie Iredell’s bloody, disturbing, frequently funny new novel is a lyrical study of a strain of destructive American masculinity at the turn of the twenty-first century. Titled The Fat Kid, the book presents accounts of the lives of the titular character and his father (named, by contrast, the thin man). A pair of cultural outsiders—the thin man is a workaday type whose unhappy discovery about his roots transforms him into violent wanderer; his son grows up feeling alienated and at odds with the world—these men become criminals under the influence of a mysterious figure named, ironically, Emanuel (and known as, among other things, “The Man,” a comically fitting moniker to attach to a prophetic character who behaves in a positively Antichrist-like manner) and something called “The Machine.” 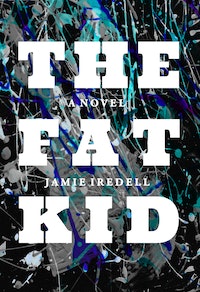