In 1998 I had received a call from my old friend (and first girlfriend back in 1984) Jackie. Best known to most as "Lady Jaye.” She reported that she was back in NYC and had taken over her grandmother’s building in the now gentrified area of Ridgewood. 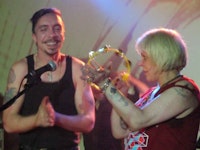