DO YOUR OWN STYLE:
On John Wilson

For the better part of the past decade the Ridgewood, New York-based filmmaker John Wilson has been churning out short documentaries that catch reality unawares (usually at its most bizarre and/or embarrassing). 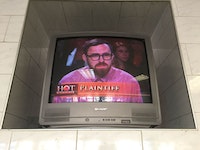 If You See Something Say Something: On Jason Giampietro

The Greenpoint-based filmmaker and photographer Jason Giampietro has kept a relatively low profile for the past decade and a half, though this may be by design. His work embodies a street-level humanism whose sheer immediacy wouldn’t be possible if not for his relative anonymity.

Class struggle has always been present in Marcello’s work, and it becomes clear rather quickly that Martin Eden (2019) marks his most headlong investigation into the politics of the 20th century and how they relate to our convulsive, confounding present. Marcello transposes London’s story to a Campania that never was, the setting (captured vividly on Marcello’s usual 16mm) a timeless composite of anachronistic motifs and the odd snatch of archival footage that cohere to give us the sense not so much of taking in a period piece as beholding history itself.

“It Seems Like a Waste … Of the Dramatic Situation”: Ryūsuke Hamaguchi’s Wheel of Fortune and Fantasy

With his audacious latest, Ryūsuke Hamaguchi tells three varied tales of desire and identity that cohere to forward an absorbing image of a world shot through with love and hate, destiny and chance, the real and the imagined.