Near the end, hugging her meant knowing her as tissue. Her skin was what can only be called Fragile. Same as the Hummel dolls she kept locked in the glass cabinet we weren’t allowed to touch: that’s a grandmother for you. Her skin was so loose it moved. I could feel my grandmother’s cheek change against my face when she hugged me.

One Friday night in the spring of 1966, the first year I was at the Iowa Fiction Workshop, I was waitressing at the Steak-Out in the Jefferson Hotel, when Phil came in, a blonde, good-looking undergraduate who lived in one of the basement rooms below me where I lived at Black's Gaslight Village. Phil was carrying a huge coil of rope.

By T. Motley and Suko Bruchardeiwitsch 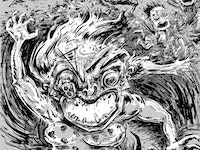