Cecilia Vicuña: La India Contaminada is a much-needed examination of the daring Chilean artist who—although working since the mid-1960s—has only recently gained recognition on the international art circuit.

As part of the Museum of Modern Art’s recurring program of new photography, Being makes good on the museum’s pledge to showcase new pieces by artists working in photography and various photo-based practices. 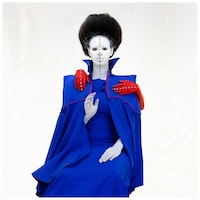 One version of the origins of capitalism posits that it was built on the backs of rural peasants. Or, more precisely, it was built by rural peasants after their shared land was expropriated from them through a variety of means, both violent and nonviolent, and they were forced to enter a wage-based economy.

Tucked into one of the many galleries of Mana Contemporary, a tobacco warehouse now repurposed as a creative hub in Jersey City, Global Alt Comics, on view at Scott Eder Gallery and curated by Alessandra Sternfeld, showcased work by seven female cartoonists and one queer cartoonist. Staples of the American underground, Mary Fleener and Trina Robbins, rising stars Lauren Weinstein and Gina Wynbrandt, voices of the international comics scene, such as Colombian-Ecuadorian Power Paola, Australian Tommi Parrish, and Catalan Conxita Herrero, and memoirist Gabrielle Bell, all found a spot in this exhibition, whose title was originally supposed to be “All Girl Thrills” after an all-female anthology edited by Robbins, sketches of which were also on view. 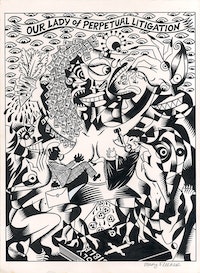 An External/Eternal Affair: On the Recent Paintings of Carroll Dunham 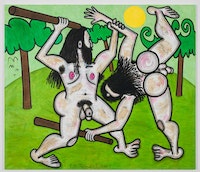 The scenes have the indelible presence of parable or myth: There was a sick woman who sought out a healer. There was a man building his house. There were two friends, sun and moon, who set out one day on the road

What life events could have caused an artist like Pagliuso to move from photographing Hollywood actors and directors to Malian ruins and fowl? And if the subjects spanning her fifty-year career are so different, why does the exhibition have such uniformity in color, tone, and style? 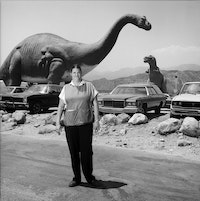 A Story to Be Told

The Young Exhibition Makers program (Y.Ex) is concerned with teaching its participants tools for self-definition, and the result of this sustained attention to meaningful expression is something quite different than both high school art exhibitions and proper gallery shows. 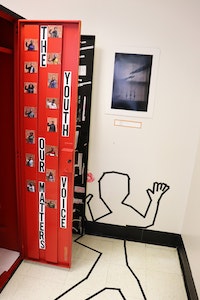 Chlöe Bass is a highly inventive conceptual artist who utilizes every tool at her disposal to unearth the beauty held within the minutiae of the everyday.

The intangible mystery of this work transports this viewer to an archaic place in consciousness when nature and mankind were inseparably fused in peaceful coexistence and respect. 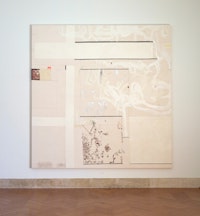 YTO BARRADA: How to Do Nothing with Nobody All Alone by Yourself

Yto Barrada’s How to Do Nothing with Nobody All Alone by Yourself oscillates between ethnography and abstraction, with bits of documentary images mixed in. This impressive show ranges chronologically from prehistory—more specifically, the Late Early Jurassic Period—to the present, the former represented by a partly reconstructed Tazoudasaurus dinosaur fossil hanging from the ceiling in separate pieces. 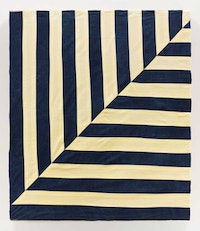 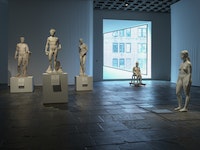 FERNANDO PALMA RODRÍGUEZ:
In Ixtli in Yollotl, We the People

In Ixtli in Yollotl, We the People is an exhibition of work made over the past two decades by Mexican artist and mechanical engineer Fernando Palma Rodríguez. Each of the mechanical-alchemical sculptures in the exhibition is rigged with light or ultrasonic sensors to be activated by observing bodies, which thereby become interacting bodies. 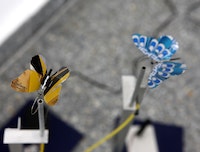 This concise, dazzling show of sixteen drawings (primarily landscapes) corrects this view, establishing Gainsborough as the progenitor of an English landscape tradition running from Constable to Turner and, ultimately, David Hockney. 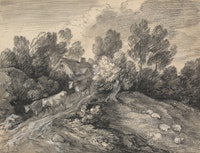 For Rosalind Krauss, the pivotal difference between Dada photomontage and Surrealist photography had to do with the relative presence of either the photographer or the world in the image itself. Surrealist “photographs are not interpretations of reality, decoding it, as in Heartfield’s photomontages. They are presentations of that very reality as configured, or coded, or written.”

As one compares forms as diverse as her classic grounded stalactite Z BOKU (2017) and the wood and linen book Book with no words (2018), TORN is perhaps not meant to be taken literally as a physical action but as a violent and painful divergence of ideas. 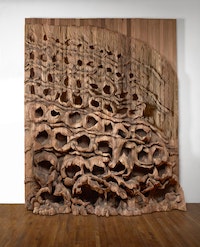 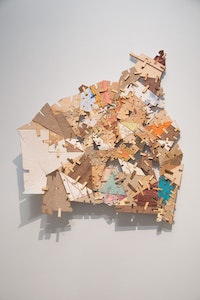 KIKI SMITH:
Below the Horizon

One hundred and thirty-two years ago, the leaders of Kihal Adath Jeshurun (“People’s Congregation of the Just”) bought three lots on a narrow street in lower Manhattan surrounded by tenements crowded with Jewish immigrants from Eastern Europe. The lots contained only a humble group of wooden row houses, but standing on that street in 1886, they imagined the space filled by a synagogue worthy of the shuls of Paris or Berlin—one that could inspire the impoverished Jews of New York and offer them a place for respite and reflection. Less than a year later, on a budget of $92,000, they completed the synagogue at Eldridge Street, a soaring, neo-Moorish temple and at once the tallest building in the neighborhood, capped by finials with the Star of David.

Heide Hatry’s art investigates matter and the decay of matter—more specifically, the corporality of the human and nonhuman dead. While her medium consists of flesh, meat, and ash, there is another essential component of her work that has not received recognition: the books she makes for each project, each of which are integral, not supplemental, to her larger oeuvre. 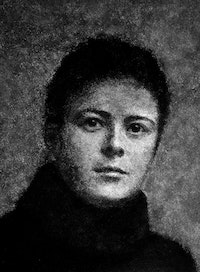 As with much abstract art, you have to look for a while before you start seeing things in Liz Deschenes’s work. The artist’s newest show, exhibited in both locations of Miguel Abreu Gallery, features a series of works comprised of photograms, a medium Deschenes has referred to in interviews as “camera-less photography&rdquo.

Al Held moved to Paris in 1949 where he was part of a loose-knit expatriate community of American painters that included Joan Mitchell and Sam Francis. 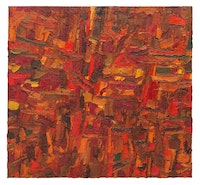 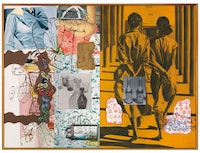 The first view of Jordan Wolfson’s sixteen-channel video installation is of its back, a hulking mass of wires, monitors and media players arranged in an upright grid on purple carpet that covers the gallery floor. Suspense is built into the approach: one has to round the corner of this monolith to access the main event. 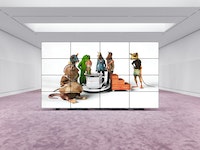 My friend A., a Greek, Latin, and Hebrew scholar, introduced me to the activity of watching Ultimate Fighting Championship (UFC) at various watering holes in Greenpoint and Williamsburg. 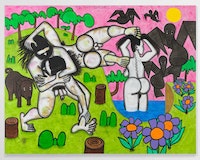 BARRY FLANAGAN:
The Hare is Metaphor

The question of poise comes up in different ways when viewing Barry Flanagan’s survey at Paul Kasmin Gallery: Strictly sculptural poise (from the ground to the plinth) but also conceptual poise, the balancing act that an artist needs to sometime effect to get their point across.

The Surrealists were impassioned by the idea of the spiritual, mental, and aesthetic connections between pre-modern societies. 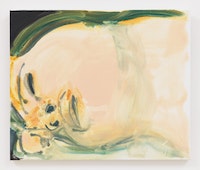 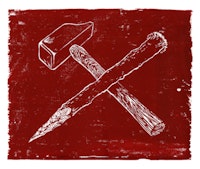 Berlin-based artist Jorinde Voigt is recognized for the luminosity of her cerebral, abstract drawings, which feature mathematical equations and annotations that explore her hermetic belief systems.

As the title suggests, Declaration, the inaugural exhibition at the Institute for Contemporary Art (ICA), Richmond’s first institution dedicated solely to contemporary art, is a declaration—or more exactly, a series of statements—introducing Virginia Commonwealth University (VCU) as a major player in the art world.

The elegance of Saville’s facture, the swirling and energetic pace of her drawing, made her inheritor of a tradition of gestural, bravura painting going back to Titian, Rubens, and Velázquez, and as reworked by John Everett Millais and Édouard Manet

This show unwraps the early years (1953 – 1959) of Japan’s influential post-war avant-garde art collective, Gutai, with a tale of innovation that presents prescient pre-Pop and pre-performance captured in its earliest moments. 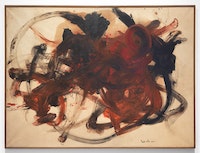 By Alex A. Jones

The thirteen paintings in Resting Position, all completed in 2018, range from 16 to 36 inches square, a modest scale that invites contemplation rather than immersion. 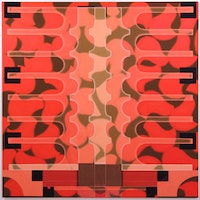 (IM)MORTALITY:
John Bruce and Pawel Wojtasik, with a performance by Matt Freedman

It begins with a looming black screen. Inside a small room that has been fashioned into a theater, a crowd has gathered to immerse itself in a subject we spend most of our lives denying. For the first minute and a half of the film, we stare into the gaping abyss while a male voice tells a Groucho Marx joke, speculates about the metaphysics of card tricks, and recounts the persistence of the black hole motif in the Roadrunner cartoon.