Dance and visual art have a rich history of mutual influence and symbiotic exhibition. Dancers as visual art subjects have spanned the globe and the millennia—from Dehli to Dakar to Degas. “Dance-in-the-Museum,” as a concept and sub-genre, is probably not as old, but it’s older than you may think.

The annual three-week Paul Taylor American Modern Dance season is always an impressive physical and mental tour de force for the company. Perennial questions anticipate the run: what premieres will Taylor present and how will they fit into his oeuvre?

Town, Country, and the Schoolyard

When the Merce Cunningham Dance Company disbanded in 2011, two years after Cunningham’s death, his choreography’s future was unclear. Who might perform it? Where might it be seen, and how often? Fearing the worst, I consumed as much Cunningham choreography as I could during the company’s final tour. 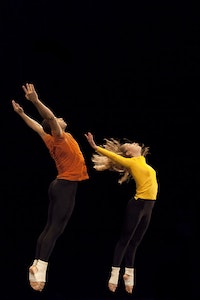 Aynsley Vandenbroucke’s AND lives in the wide little Underground Theater of Abrons Arts Center with a particular intimacy conjured by a piece about structures and spaces. The stage’s three shallowly angled walls are treated as screens. Two chairs and tables, touting their own Ikea-ness, are in the center of the space with a microphone.

I’ve snuck into a couple of rehearsals and pretended to be a dramaturg. Really, I was invited into the room, but it seems like I still have to pretend. It’s because I’m not sure if dramaturgy is the work’s intestines or if it’s the work’s haircut.