Even The Dead Will Not Be Safe
Montage, History, and Cutting Art Museums

Editors’ note: This is the first installment of a long-form essay to be published here over the next three issues. In it, artist, filmmaker, and teacher Madison Brookshire examines how art museums, and art history can be radically re-potentiated through strategies of cinematic montage.

Since 1949, James Baldwin has been singing a song. It’s an old tune, at times tender, chiding, insistent, blaring, but always loving. It is, at its core, a bluesy refrain to the country that formed him, tormented him, his contemporaries, and his kin, and ultimately drove him from its shores.

Wolfgang Staehle has given us, in his extended digital photographic record of Ludlow Street, not one but ten recordings of twenty-four hours each. Using chance operations, a single day was chosen from each year between 2005 and 2016, except for 2008 and 2014. 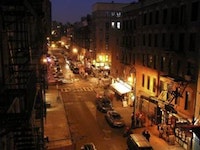 An old chestnut—no less true for being old, nor a chestnut—has it that an effective political cinema cannot merely represent radical political movements, issues, or events, but must render them through forms that are themselves radically political.