No one could call globalization a failure: To the succession of the hottest years ever must now be added the achievement of a distribution of wealth in which eight men (six of them Americans) own the same wealth as the 3.6 billion people who make up the poorer half of humanity.

Shortly before Donald Trump’s electoral victory, a bizarre alliance of sorts emerged: from one side, military and foreign policy bureaucrats, neocon hawks and politicians, mainstream liberals and their favorite press outlets (Financial Times, New York Times, the Economist, etc.); from the other, left-wing militants, anti-racist activists, social justice warriors, and other fans of democracy.

Standing with Syrians: An Open Letter to an Anti-Imperialist

Eva is a real person whom I have known since 2007, as described in this article. But in this text Eva stands for many politically engaged individuals, whether outspoken or silent supporters of the Syrian regime and its allies. I will not re-post her photo here. In a world flooded with images, it is important to maintain our ability to imagine a moment.

The Iranian refugees in Calais sewed their mouths shut and went on a twenty-five-day hunger strike, after authorities destroyed the tents they were living in while they waited for asylum. 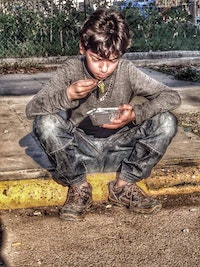