FROM CANNES TO ORAN, AND BACK
Hervé Koubi Drops Day and Night on the Pillow

What the Day Owes to the Night (Ce Que le Jour Doit à la Nuit). The title of choreographer Hervé Koubi’s spectacle de la danse is drawn from Yasmina Khadra’s 2010 novel: a coming-of-age love story set in the period before, and the aftermath of, the French-Algerian war. It’s not that the piece draws from the novel’s plot or characters, but rather the novel’s setting, Oran, Algeria, was the home of Koubi’s ancestors, and the poetry of the title captured his imagination as apropos of the work.

“This show is about you and your problems,” Ann Liv Young declares. Her blonde wig and powder-blue eyeshadow are harsh under the house lights, which she has requested the theater tech turn up. She wants to see who’s in her audience. 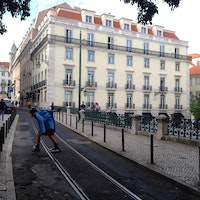 Good news: the L.A. Dance Project (LADP) is back at full strength, with artistic director Benjamin Millepied able to refocus on the company now that he has left his post at the Paris Opera Ballet.