by Francis Ponge, translated from the French by JD Larson | forthcoming from Red Dust, 2017

Country house, one long single ground floor, facing the south. Preserved by some outbuilding forming perpendicular garlic, to the right.

When I started renting movies from Evergreen Video it occupied the second story of a dilapidated building on West Houston Street. On the ground floor was Martin’s Bar and Grill, a tenebrous and seedy drinking establishment that seemed like a relic of some earlier version of downtown Manhattan, even thought at the time—the early 1990s—there were still many such survivals: Italian bakeries, Irish bars, Portuguese groceries, Puerto Rican bodegas, second-hand bookstores run by ash-sprinkled Jewish men who often reminded me of my father, miniscule record stores dedicated to particular genres or eras, boutiques whose stocks of clothes hadn’t been updated since the early 1970s.

He was an Ethiopian prince and she the daughter of a wealthy widower, an Egyptian merchant, who, for reasons unknown, had settled in Vevey, Switzerland. They met one evening at a diplomats’ ball.

Like many people of talent, I was discovered in a restaurant at a very young age. I was ten, maybe eleven. My mother had just slapped me across my mouth for calling my dad “a dummy,” and I was crying.

T. MOTLEY is the 2016 silver medalist in the Society of Illustrators' Short Form Comics competition, winning for a story he contributed to Cartozia Tales. 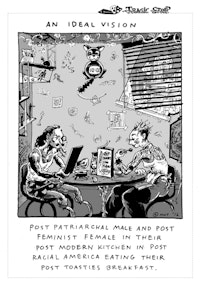