Now More Than Ever, We Need This Party

I only just made it to Thirsty Mind, thanks to an extra show added on Sunday evening. I was coming back from a trip and arrived straight from the airport. 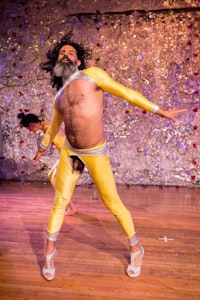 Marie Chouinard performed her first solo, Crystallization, in 1978: it was an hour-long “study of geometrical movement” inside an art gallery, set to the sound-scape of musician Rober Racine scraping a metal grill.

There’s a quiet revolution underway at ABT—in its spring season, an impressive half of the repertory is by Alexei Ratmansky. The latest addition is The Golden Cockerel, a full-length spectacle originally created in 2012 for the Royal Danish Ballet, which loaned the lavish costumes and scenery by Richard Hudson (based on early 20th-century designs by Natalia Goncharova).

Like the body’s connective tissues, our experience of the present moment is malleable. What we are conscious of changes our perception. Contemporary performance directs this consciousness, engaging our senses to elicit experience.