Chinese documentary filmmaker Zhao Liang is mostly associated with brave and heartwrenching cinema that illuminates marginal lives in China. The images of artists being unreasonably evicted as illegitimate residents (Farewell Yuanmingyuan (1995)), abusive border police violently torturing ordinary citizens (Crime and Punishment (2007)), and petitioners getting sent to mental institutions for simply confronting the government (Petition (2009)) stand in stark contrast to the Chinese mainstream media’s negligence and elimination of this social landscape.

CONSTELLATIONS AND CHROMOSOMES:
The Short Films of Conrad Schnitzler 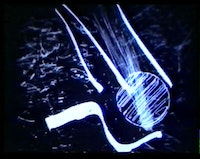 With his films Police, Adjective (2009) and Metabolism, or When Evening Falls on Bucharest (2013), Corneliu Porumboiu has established himself as one of the preeminent members of the Romanian New Wave, a cinema movement that is still bearing fruit a decade after coming to the attention of international audiences.

Close your eyes and imagine a megaplex—say, the AMC Regal E-Walk 42nd Street—converted into a massive, orgiastic, and yet somehow profitable bonanza of world cinema for ten consecutive days. Apparently, this is what happens every September at the Scotiabank Theatre (alongside ten other, also ridiculously huge venues), all nestled between skyscraper-condo construction sites in the main drag of downtown Toronto for said city’s International Film Festival.