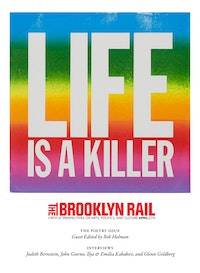 Bob Holman (Rail): For you, which came first, the camera or the pen?

Melnechuk hosting The Poet in New York at the Bowery Poetry Club.

Rail: What was your first experience with each?

Melnechuk: I used the family’s still camera to document one of my parents’ grad school parties. Must have been about 10 years old. When the film came back, all the shots were from my slight height, looking up—the nervous hands under the plates, a secret footsie—I had a perspective. The underbelly of things.

The idea of the poem was introduced to me by my grandfather, the neuroscientist poet Theodore Melnechuk, as soon as I could read. Writing poems came later, in high school, when I took a poetry class with poet John Bechtold. On the first day of class, he asked us what the material of our shirts felt like. I’d forgotten I was even wearing a shirt. On the second day of class, he pointed out that everyone had sat in the same seat as the day before. He asked us to sit in a different seat each day to defamiliarize ourselves from the quotidian. I wrote my first poem in his class.

Rail: When did the idea come to you that poetry and film could be unitized (when I met you, you were working on a film about Tuli Kupferberg)?

Melnechuk: Improv theater pioneer David Shepherd (founder of Second City and Compass in Chicago) retired to the next town over from mine in Massachusetts, and put an ad in the paper looking for an assistant. The only requirement: proficiency in video cameras. My mother urged me to apply, and he brought me in for an interview. You should have seen his face when a 13-year-old showed up. But I showed him my camera skills, and he hired me. I spent the next five years apprenticing with him as he experimented with applying improv theater techniques to cinema.

Near the end of high school, Second City held a youth video-making competition and I submitted my first video poem (though I didn’t call it that at the time), a silent curio titled Tears of a Clown, which won.

I call it a video poem because I had an inclination toward a story, but it took the making of the video for that inclination to coalesce into a true idea. Not the typical idea, script, shoot path films usually take, but the process of making a poem. There’s a stirring inside, but it takes the speaking out or the writing down—and now the shooting it—to exist.

Rail: What do you say to people who are surprised when you tell them Bowery Poetry Club is still open?

Melnechuk: Don’t Michael Jordan still got his hoop earring in?

Rail: How did the Bow Wow become The Poet in New York?

Melnechuk: I was part of a group called the Stakeholders. Producer Poets all, we pitched series and coached one another. I proposed a monthly featured poet series, BOWWOW, which would pull in fresh poets from the diverse NYC poetry scenes, backed by musical accompaniment. We hosted 25 of them. When I got the chance to reopen Bowery Poetry after its renovation (with Adam Horowitz, now Chief Instigator of the USDAC), I saw the need for a weekly open mic. I took BOWWOW’s feature + music model, and added open mic, under the header “New, New York Poetry.” We hosted the 60th show this past Monday.

Rail: What does Lorca have to do with your Monday nights?

Melnechuk: Lorca spent much of 1929 in NYC, walking the streets from Columbia University where he was lecturing/studying all the way downtown. That was the Great Depression. The poems he wrote were published posthumously as A Poet in New York. Powerful, dark, critical of the hypocrisies and inequities of the city. Most of us are visitors, or transplants, to New York. The perspective of the outsider can be revealing and useful. I hope the poems read Monday nights at our Poet in New York series don’t shy away from hard truths.

Rail: How can someone get involved with Bowery Poetry?

Melnechuk: Pitch us a show! [email protected]. #BYOPoem to the Poet in New York, 9 p.m. Mondays.
Check out our calendar at www.bowerypoetry.com. Tag @bowerypoetry.


Free Writing with the Camera

Democracy values “free” speech. Free expression, expressed freely. Speaking, Writing, is free and easy. Say something. Pick up a pen, a napkin, record it. Let the song of yourself unspool in written poem. Putting an idea on film used to be costly and difficult—digital simplifies things. Pick up a smartphone and go. Let the action of people, cities, nature unspool in framed image. Now, you can be free to express yourself with a camera. The video poem emerges.

The Poet in New York

The Poet in New York, Bowery Poetry’s signature series, 9 pm every Monday. A featured poet sets the tone. Panama/Brooklyn jazz duo accompanies. Ten open mic slots, and the audience chooses one to be published on thepoetinnewyork.com. You never know what special guest is going to drop in and sing. #BYOPoem.

How to let such moments calm me,
In the midst of worry, in throes of self-doubt,
How to be cool again, breathe blues,
Forget me and do you right now.

Nikhil Melnechuk is a poet and filmmaker from Massachusetts living in New York City, and a graduate of Wesleyan University. He is Executive Director of Bowery Arts+Science which runs the Bowery Poetry Club, and co-owner of The Melnechuk Williams Company which produces films. Melnechuk has grown up under the mentorship of Bowery Poetry founder, poet, and language activist Bob Holman, improv theater pioneer David Shepherd, and acclaimed Israeli filmmaker Amos Kollek.