A FEMINIST RESPONSE
Gender Games and the Art Machine

In April of this year, I had the opportunity to interview artist Kara Walker on the subject of her project at the Domino Sugar Factory in Williamsburg, Brooklyn. Our discussion, printed in the May edition of the Brooklyn Rail, covered issues of race and class, the subjugation of the labor force, and the economic and political complexities that engender and sustain such division, none of which can be considered without a discussion of feminism. 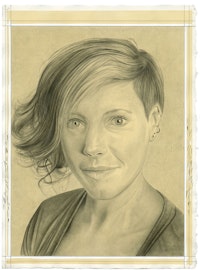 In fall of 2013 I began the Gallery Tally project—a collaborative, crowd-sourced endeavor to tally and visualize statistical data pertaining to the numbers of male and female artists who were represented by top contemporary art galleries.

Do we really need another article, book, or panel addressing gender disparity in the art world? Some might think that we have addressed the issue ad nauseam but the reality is that until measurable change happens, the answer is, yes, we must continue the conversation.

Fifteen years later, we still seem to be in a condition of “post-feminism” and what bell hooks, referring to Sheryl Sandberg’s brand of “lean in” feminism, has called “faux feminism.”

Riding the Fourth Wave in a Changing Sea

Although I’ve heard the term “fourth wave feminism” referenced in casual conversation, its contours remain fuzzy as a movement. A quick Google search reveals that the term has been bandied about for at least the last four years.

Earlier this year, I ran into an old friend at an art opening. He asked about my studies and my area of focus. Unsure of what to say, I vaguely muttered the inadequate response: “something about feminism.”

The notion of a “gendered voice” is a complicated subject, a subject that hits close to home and one that we continually question in our collaborative practice. 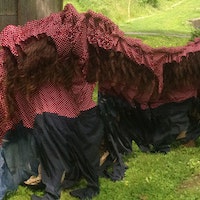 ECOSEX MANIFESTO
Draft 1.0 of a Work in Progress

By Beth Stephens and Annie Sprinkle

The Earth is our lover. We are madly, passionately, and fiercely in love, and we are grateful for this relationship each and every day.

After the Slumber Party…

By Andrea Bowers and Suzanne Lacy

Andrea Bowers and Suzanne Lacy: Drawing Lessons consisted of drawing lessons provided by Bowers over the course of nine days at The Drawing Center in Manhattan.

Do I Stand in Darkness or in Light?

Do I stand in darkness or in light? Do I speak or am I silent? When I do speak, how are my words received? Where does my power and privilege lie?

gender dysphoria is thought to affect as many as one in 10,000 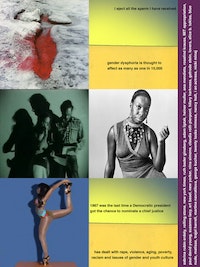 Why is feminism resurgent now? One answer may be the galloping growth of an economic inequality that no amount of effort or merit can overcome.

The success of feminist art is seen to herald a post-feminist era for women artists who no longer have to muddy the waters of the creative/procreative binary, for instance by gently unfurling a scroll from their vaginas.

The Language of Art is Still Defined by Men

Gender roles are ingrained in all of us. From the time we are born we are all “stamped” by our sex. Thousands of years of oppression will not change easily or quickly. Sometimes we lose this perspective and expect change now.

As the daughter of a woman artist, I saw, first-hand, the toll of discrimination based solely on gender. For my mother’s generation, the misogyny of the Mad Men-era of the 1950s and 1960s was well known. And while the style of suits has changed, the discrimination persists.

Robert Farris Thompson, a strong proponent of the traditional nature of hiphop, has made his life’s work translating African cool into terms acceptable to the ivory tower canon. His conclusions—that African cool entails the high sense of balance and transcendence, and is a sign of positive transition to ideal worlds, leads us to African Art as the ritual marriage of sensuous pleasure and moral responsibility. 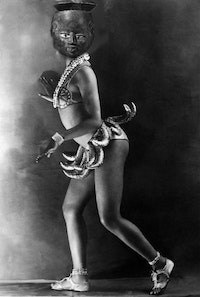 In America, it is common to gather around a welcoming potluck. There is no such French counterpart. Luck is not something the French subjectively look at. A nation built on a Cartesian philosophy of mind, where concepts are validated through quantified numbers and scientific methods, would undoubtedly question its provenance.

All You Protest Kids, You Can Hear Jack Say, Sweet Jane

Notes from an Old Maenad in the Trenches

At 68, I was part of the second feminist charge in Los Angeles. I was among the first group of women to gain anything resembling an equal share (thanks to Marcia Tucker) in the Whitney Biennial of 1973.

Within the larynx “voice box” that manipulates pitch and volume are the vocal cords, which are abducted to breathe and adducted to speak, as well as the false vocal cords, the vestibular folds that we hear tremble in Tibetan throat singing or heavy metal growls.

A white T-shirt I have reads in hand-written black marker, “NAME 10 FEMALE ARTISTS & WILL GIVE YOU A KISS.” Artist Nicole Nadeau made the shirt for the “Clitney Perennial,” a rogue art intervention I initiated at the Whitney Biennial this year.

After Some Advances, A Backslide

The idea of “progress” was widely debunked by critical postmodernism, but it is hard to dispute the fact that some genuine progress has been made for women in the art world.