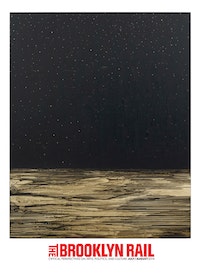 Maria Morganti is one of those rare artists fortunate enough to have developed a seemingly inexhaustible idiom that is wholly her own—more meaningful than a gimmick, yet simple enough to sustain infinite variation. In four windows that open onto Rome’s Via Della Penna, she condenses the essence of a rigorous, contemplative artistic practice—a practice as physical as the city that inspired the works on display: the daily mixing, layering, and accretion of color. Her quietly inimitable work is, itself, a window onto her life.

Maria Morganti, “Impronta 2010 – 12”. Installation view, pastels and oil sticks. Photo: D. Aichino. Notice the bits of color embedded in the window sill (Scheggia). A partial view of Nel travertino is seen in the window above.

For this, the third of gallery Otto Zoo’s four collaborative exhibitions that center around the interaction of an artist and a text, Morganti created a site-specific body of work that effortlessly translates layers of color into a meditation on the sedimentary layers of marble and memory of the “eternal city.” This in turn inspired Matteo Nucci’s I diari di via dell’Oca e via della Penna (The Diaries of Via Dell’Oca and Via Della Penna), an evocative collection of anecdotes on growing up in Rome that anchor memory in place.

The exhibition space consists of two windows, their sills each fitted with a smaller window, each one completely accessible to passersby. Morganti’s work thus becomes a part of the street, part of the city. The first large window contains “Sedimentazione 2013 #4” (“Sedimentation 2013 #4”), one of Morganti’s signature paintings: she covers a small (here, about 10-inch square) canvas with paint she mixes in a bowl in an intuitive, often lengthy process, eventually arriving at a color that embodies her subjective experiences and feeling-states of that particular day. The next day, the remains of that color become the basis of a new one, which is then used to cover the previous day’s work—all except for a thin ribbon on one edge. The process is repeated until it is “done”; the painting documents its own creation in the closely spaced lines of color that mark their sequence of application. Separate and discontinuous, they are nevertheless connected by their derivational relationship. In “Sedimentazione,” the colors are the colors of Rome: pumpkin, ochre. The window below it contains “Stratificazione (Stratification) Fragment of painting with agate,” a sculpture that involves an analogous process, in which Morganti rubs colored plasticine into thin slabs, recalling the layered sections of Murano glass of her native Venice. A wedge of this layered plasticine tops a stratified piece of German agate. Layers of color thus mirror, and implicitly symbolize, the agate’s layers of age.

A second large window holds “Nel travertine” (“In Travertine”). A 2 × 2-foot slab of travertine marble—that quintessentially Roman material— is impregnated with layered plasticine, forming dabs and rivers of color in the rock’s porous grain. In the window below is “Impronta 2010 – 2012” (“Impression 2010 – 2012”), a piece of paper covered with dense spatters of color, upon which Morganti created works in pastel and oil stick over two years. A platform bearing the residue and outlines of the efforts it supported, it is—like the ribbon of color on the paintings—more than an artifact, but a record of motions and emotions accumulated over time.

And there is also a fifth, more cryptic work: “Scheggia” (“Splinter”), two tiny bits of plasticine rubbed into the Roman travertine window sill, exposed to the street and unprotected by glass, wordlessly asking the inevitable questions: How long will this remain? How long will we remain? The stone will outlive us all.

In her diaristic practice, Morganti carries on a family tradition: it is no wonder that she is the daughter of well-known journalist Piero Morganti, whose voluminous diaries she edited and published as part of a set, twinned with a book of her paintings. Similarly, the storied Via Della Penna and Via dell’Oca are twinned, contiguous streets, each one block long, that together form a whole. These streets are inscribed with the lives of the celebrated artists and writers who made them their home, most famously Elsa Morante and Alberto Moravia—and now also Morganti. Marking the street with her pigmented imprint, she leaves a lasting trace.

ADELE TUTTER, M.D., Ph.D. is a practicing psychoanalyst and professor of psychiatry at Columbia University. She is the author of Dream House: An Intimate Portrait of the Philip Johnson Glass House (forthcoming from the University of Virginia Press) and coeditor of Grief and its Transcendence: Creativity, Memory, and Identity (Routledge). She is currently working on a second monograph, Mourning and Metamorphosis: Poussin's Ovidian Vision.