Dada and Surrealist Objects at Blain/DiDonna Gallery encompasses a selection of 85 works by key figures from the early avant-garde years. 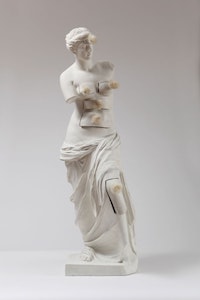 Using an assortment of Arte Povera type materials, Los Angeles based artist Fran Siegel constructs dense, eclectic visualizations of the history and demographic composition of different urban environments through the media of drawing and collage.

For the unfamiliar, a brief history of Mike Kelley, artist: born in Detroit, 1954, studied art at the University of Michigan, earned his MFA at Cal Arts during its moment as the epicenter of conceptual art in the ‘70s, remained in Los Angeles, was first embraced by the art world for his found-object sculptural works that toyed with the conventional in the cynical 1980s, grew increasingly influential as his work expanded in ambition and scale, committed suicide at age 57.

Susan Eley Fine Art in Manhattan recently exhibited a selection of paintings and in a manner of counterpoint, works on paper, as well as a video installation by the New York-based artist Anne Sherwood Pundyk, entitled Stadia.

Every Force Evolves a Form

Perhaps more than many of his peers from the late ’60s through today, Richard Serra continues to explore his monumental anxiety through an inquiry of form, as much as remaining openly receptive to the art of the past and the art of his own time, especially regarding potential expansions from the language of post-Minimalism.

Peter Young deals often in infinities, symmetries, and repeating and non-repeating patterns; strategies that are patently abstract, but at the same time manage to harness an intensely human connection to the spiritual.

Wayne Thiebaud’s Memory Mountains, a survey of 48 paintings and drawings going back to 1962, calls to mind an old song, “The Big Rock Candy Mountain,” partly because the mountains’ confectionary colors and stratified pigments recall those of the artist’s well known paintings of cakes and pies, but also because the cartoonish imagery of many of the paintings evoke, like the song, a fantastic never-never land—an ironic take on the American sublime. 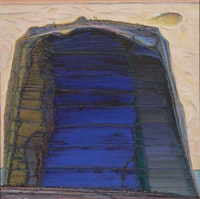 SHIRLEY JAFFE Paintings from the 1970s

There are few artists working today whose work I admire without reservation. Shirley Jaffe is one. Her recent exhibition at Tibor de Nagy Gallery of not so recent work (six major paintings from 1974 – 79) offers a revealing insight into the mental processes of a supremely intelligent artist at a moment of profound transition. 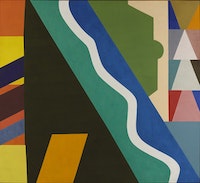 Is it possible to be punched in the gut by a flower? This is the feeling provoked by “Pageant” (2013), the first painting that comes into view as one enters Gregory Amenoff’s recent show of paintings and drawings. 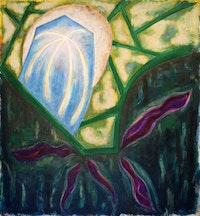 Imagine a place and time in New York where multiple city blocks were devoid of pedestrians and in which the passages from one neighborhood to the next occasioned drastic psychic shifts.

Facing the large gallery windows that open onto Grand Street, four white organic pillow-like shapes hang on a free-standing floor to ceiling wall; one in each corner. The title of this piece is “Vier Körperformen” (1963). A small, framed drawing to the right of this wall, “Körperformen” (1963), shows the outline of five similar shapes.

The bricks traversed the Atlantic singly. They were each numbered on all six faces and packaged in individual crates. Before that, they were joined in a church in Fuentidueña, Spain. Cut from limestone in the 12th century, they formed the apse—the semicircular, easterly area that frames a church’s altar. 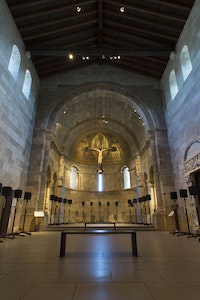 I See Paris, I See France…

…And yes, we see Thérèse’s underpants. The showstopper, “Thérèse Dreaming” (1938), gets deserved pride of place in this exhibition of paintings made by Balthus between 1937 and 1959. 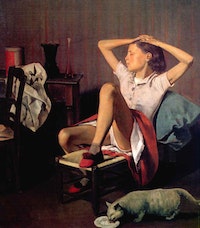 Valentine’s Day has come early to Chelsea—in a love poem of an exhibition at the David Zwirner gallery. Showcasing recent works by Japanese artist Yayoi Kusama, I Who Have Arrived in Heaven consumes all three of the gallery’s West 19th Street locations and will continue to do so through December 21, 2013. 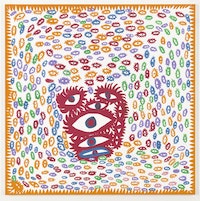 Now that it has been a full century since the advent of non-representational painting in the West, and after so many styles since its loss of historical authority, what are the chances of an “alternative modernist, abstract vision of plenitude?” 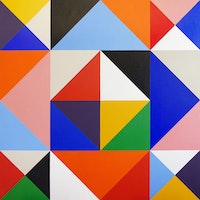 By Phong Bui and Ben Keating

One of the first art books I bought as an art student was H.H. Arnason’s handsome volume on Robert Motherwell. (I’ve always admired Motherwell’s keen graphic sensibility synthesized with his particular painterly eloquence, as well as his life as an intellectual/artist who simultaneously embraced the co-existence of solitude and cosmopolitanism.) The following is a selection of works that reaffirmed my memory, with on-the-spot thoughts written as an homage to the artist. 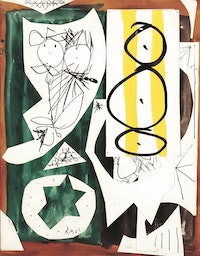 Bill Jensen can be a difficult artist to love. Anxious and phenomenal, the work of this Brooklyn-based painter often goes down as smoothly as a gulp of Campari. But in Floating World, his current solo show at Yoshii Gallery, Jensen has dared to ease his hand and decompress his compositions.

Helmut Federle’s fifth solo exhibition at Peter Blum, The Ferner Paintings, is promoted with an announcement card that excerpts an anecdote from Giorgio Vasari’s The Lives of the Artists (1550), wherein Italy’s great painters were asked by the Pope to prove their skill. Vasari reports that Giotto was judged as the greatest of all the candidates by replying with a perfect freehand drawing of a circle on an otherwise-blank sheet of paper. 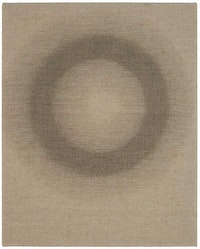 On We Think Alone

It may be physically impossible to keep a secret. “If his lips are silent, he chatters with his fingertips,” wrote Freud over a century ago, perhaps of some calm-faced neurotic drumming anxiety into an armrest. Now that modern fingertips chatter their secrets into laptops and iPhones, the same principle applies.

In this solo show by Emi Anrakuji, her fourth at the gallery Miyako Yoshinaga, the artist has entitled the exhibition O Mapa, which translates to “The Map” in Portuguese.

Nowadays there are so many approaches to ceramics: glitzy and brassy; a vast family of figuration—great-grandchildren of Meissen; wabi sabi earthy; watch my bravura technique; and more. But restraint is rarely an admired objective. 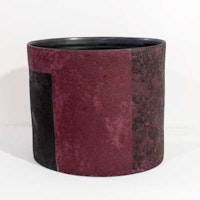 “In place of a hermeneutics, we need an erotics of art.” Susan Sontag offered this challenge to a critic in her 1964 essay, “Against Interpretation.” She argued that the task of a critic was to elucidate for the reader how a work of art “is what it is,” rather than to show “what it means.”

Shadow, Ripple, and Reflection is Bejamin Degen’s debut solo show at Susan Inglett. It features eight paintings—all made in the last year—that are linked by their pictorial content and sensory ambition.

The Pompidou Centre is currently presenting, in retrospective form, about 50 relational art projects by Pierre Huyghe that span more than 20 years. This retrospective is further augmented upstairs in the permanent collection that includes his two-channel video “The Third Memory” (1999), where John Wojtowicz tells his story of the robbery portrayed in the movie Dog Day Afternoon (1975).

Across this remarkably diverse spread of artwork, Shoja Azari consistently bridges Western and Iranian artistic traditions while also melding the mediums of painting and video in new and inventive ways.

Art Seen is supported by the Willem de Kooning Foundation.