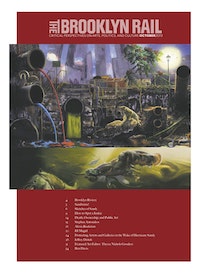 In 1971 Vito Acconci performed “Seedbed” at Sonnabend Gallery. The artist masturbated for hours at a time beneath a low ramp built upon the gallery floor while patrons walked above. Acconci’s provocative statements played over speakers, establishing an environment of threatening sexual presence. “Seedbed” is now considered a watershed moment in BodyArt, and filmic documentation of the piece is in the permanent collection of the Museum of Modern Art. Decades later, ArtHelix and its director Peter Hopkins have conceived of Flower Garden, a multi-use platform space that converses with Acconci’s legendary performance on topics such as gender, public space, and the digitized subject.

When you approach Flower Garden it appears not unlike the carefully cultivated post-apocalyptic aesthetic of Bushwick and its environs. Set in an abandoned lot on Harrison Street, Flower Garden takes physical form as two tons of dirt arranged in a long phallic planter. The surface that extends beneath the planter is rough-cut gravel, terminating at a prefabricated gardening shed—the Secret Garden. Female guests are encouraged to use the shed as a private space in which to recreate the masturbatory experience of Acconci’s original performance. A flower is planted in the garden to instantiate each experience that has transpired in the shed. Finally, so as to result in a “fully realized social event,” participants are interviewed about their Secret Garden experience and may then choose to link the video recording of their interview to several social networks.

Though liable to be essentialized as a feminist response to Acconci, vastly more is at stake. With Flower Garden, Hopkins establishes an “open source” space for artists—but even to call the participants artists would be to resurrect legacy roles that Hopkins would prefer to refute. Initially the garden is spare; the arrangements and objects in the lot are secondary and arrive through user feedback. Hopkins uses Flower Garden to dehistoricize the art act by creating a constantly updateable space, much in the same way that the passive pluralistic communication encouraged by today’s networked exchange has fragmented narrative and teleology. As with all good software, the structure of Flower Garden is simple, and as with all good user experiences, its content is rewriteable. The confluence of digitally networked exchange replaces the need for the singular act to be understood, read, or housed in what Hopkins calls the “masculine” structures of the late modern gallery edifice.

For ArtHelix, this is the paradigm shift of an ascendant generation of digital natives: a change only beginning to be theorized, and even still only partially escaping the aging shell of connoisseurship, commodity relations, and the macho “genius” of late modern Body and Land artists who, in the words of Thomas McEvilley, “act[ed] out a heroic role as metaphysical adventurer.” The homogenous gallery space that Hopkins rejects is a legacy platform, still performing an aesthetic exchange steeled in the social economy of the Enlightenment—and with no plans to update or fix an outdated model of closed proprietary exchange.

In After Art (Princeton University Press, 2013), David Joselit proposes an end to the Renaissance assumptions that bound up art with humanist learning. Joselit theorizes our era’s “image explosion” by asserting that today, “images possess vast power through their capacity for replication, remediation, and dissemination at variable velocities,” thus shifting our discourse toward “what images do once they enter circulation in heterogeneous networks.” Likewise Flower Garden advances a discursive plan, doing violence to the notion of performance as such. Instead it was conceived as a “format” for content, a mid-wife to programs deployed on its platform. “I want artists to come in and write code,” Hopkins asserts. Networked, iterative, and shareable, the results of Hopkins’s program are intentionally aligned with yonic aesthetics. In its non-assertion the format imposes only basic rules for engagement designed to enhance fecundity, comfort, and self-expression. Flower Garden is an attempt to dramatize the manner in which acts in physical space are reconstituted through a society mediated by software.