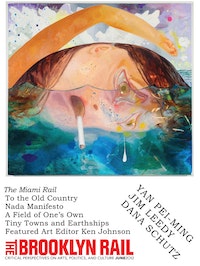 Close to the Edge: In Search of the Global Hip Hop Generation

It used to be hard to find a rap song that didn’t end with international shout-outs. The obvious question was: Do they really have fans there? Turns out, they did.

Based in Rochester, BOA Editions is an independent literary publishing house known for its innovative and form-pushing fiction and poetry collections and its artful translations of the world’s most worthy—most necessary—new-made poems. I spoke on the phone with Peter Conners, BOA’s publisher and leader of this great small press.

“Gay literature” has long had a tough time having to account for itself, if for no other reason than the general public’s reluctance to read past the first word of that phrase. Nevertheless, Bram is one of (gay) literature’s best; one writer in a long line of writers who have not only artfully mined the subtle complexities of love, but also challenged the stolid social orthodoxies surrounding it.

When he died in 1992, David Wojnarowicz was given a political funeral in the streets of New York. The Marys, a coalition of AIDS activists, shepherded the silent processional through the East Village, the neighborhood where Wojnarowicz had lived, worked, and, like so many other luminaries of the downtown art scene, succumbed to AIDS.

FICTION
Drugs and Other Loves

I met Rami Shamir when working for Barney Rosset at Evergreen Review, and so I welcome Rami’s novel Train to Pokipse, which he kept talking about writing and now finally has. Rami and Barney became good friends and, oddly enough, this novel helped me to understand why.

FICTION
THE OTHER WORLD

The novel opens on a lonely road through the Arizona desert, with a driver traveling from Los Angeles to Phoenix, wary eyes fixed to his mirrors. Hughes’s initial surprise is not the loud pop of a gunshot, but the bare beauty of her prose.

Ted Greenwald’s Clearview/LIE is a memoir, but it subverts many narrative traditions of memoir-writing through poetic techniques, mainly fragmentation, repetition, temporal shifts, and tonal rebellions.

Cheikh Hamidou Kane’s Ambiguous Adventure is a deeply personal novel that traces a boy’s fall from spiritual fervor to apathy and the consequences of that lost faith.

From Guadeloupe to Harlem, the poet frames philosophical ruminations inside a cinematic eye.

More than eight decades ago, Zora Neale Hurston, the Harlem Renaissance writer, served as an anthropological Matthew Henson, in search of new territories of discovery for authentic African-American stories.

A Counterfeit Tale, Full of Value

César Aira says he doesn’t revise, which, of course, seems like a ridiculous claim. But his oeuvre suggests otherwise: since 1975, the Argentine writer has published more than 80 works of stories, novels, and essays.

Matthew Salesses’s novella, The Last Repatriate, is a little book, four inches by six, at a slim 70 pages, but it attempts, for the most part successfully, to tell a story of war and its consequences.