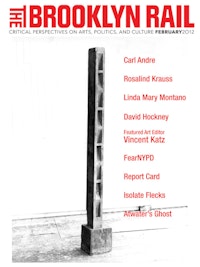 Because we believe it is necessary periodically to take the pulse of painting, we propose in this issue to use diverse forms of criticism to examine what one can see this month in New York City. We are using painting here not exclusively but rather inclusively, as symbolic of the creative act. To perform this task, we decided to revive two forms of writing that were once common but have largely fallen out of use. One is the micro-review, with its senses of verbal and connective spontaneity we associate with poet-critics like James Schuyler, who were past masters at this quicksilver art. And we want to channel, if possible, the great dance critic and poet Edwin Denby, who wrote most of his criticism in that fertile interval between the end of the performance and the toll of midnight, at which time he had to turn in his copy to be printed in the next morning’s paper. Or John Russell, who famously sat down at the typewriter and typed out his critiques without changing a word. These are our models; we will probably not achieve their felicitous heights, but we felt that we could stretch and exercise our critical approaches by imitating them. They were critic-artists, and we want to see if our own impromptu wit and expansiveness can be encompassed in this rapid firing of thought and language. In addition, we want to bring back a more direct interaction between critic and artist, and for that, we are accessing another classic form—the studio visit, perhaps in the “So-and-So Paints a Picture” mode, made famous by ARTnews under the editorship of Thomas Hess. It turns out that, while studio visits are made every day in New York City, they are rarely written about. The new version of this form may turn out to be less a documentation of work and more an account of an interaction, crucially focusing on what the visitor sees and hears in the workspace. We chose to apply these direct approaches to writing to an art form that relies on the direct application of medium to support, revealing hand-traces of the physical body, thus engendering a physical vibration in the observer. Instead of reviewing only exhibitions, we want to propose awareness of a multiplicity of ways painting can be seen at any given time and place, and for that reason we include—in addition to paintings on view in exhibitions—installations in permanent collections of museums, and, via the studio visits, paintings not currently on view to the public, whether or not they may be exhibited in the near future.

Toronto-born and South Bronx-based Mike Childs has been working in New York since 1995. In this exhibition, 28 paintings from the last 16 years are presented, revealing a constant and evolving exploration of how humans negotiate their surrounding modularly built, urban environment. Patterns and contiguous space interface, interlace, and proliferate like so many passing surfaces and colors, changing with the passage of time or the panorama of a gaze. Walls, graffiti, signage, and bridges of the Bronx all began to fold into the flux of Childs’s images during his time living in the neighborhood.

Tiwaline is primarily beat orientated, with percussion usually to the fore, a bass thrum acting like a magnified frame drum interior. She often chooses a portentous mood-construction, with swirling soundscapes, sometimes scattered with metal percussion, or marimba sounds, perhaps with a wooden flute swirling to evoke a desert trance state.

Made of linguistic forms and failures: inquiry in times of isolation

Invitée à écrire en Anglais, les idées me viennent en français. (trans.: Invited to write in English, I can only think about the content in French.) I hear in French. I understand sounds in my native (and contracted) French Canadian, with a hint of my father’s French which carries a melodic and grammatically correct French from the Caribbean.