Illustrious choreographers, heroes of the avant-garde, Deborah Hay and Yvonne Rainer will present new work in a double-bill at Baryshnikov Arts Center November 17-19 as part of PERFORMA 2009.

Over a week has passed since I saw American Ballet Theater’s three world premieres at Avery Fisher Hall, and I’m still not sure what to make of them. Most pleasurable, for me, was seeing the company in a new venue. 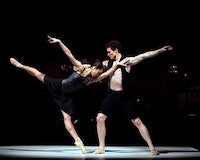 Brightly lit, the stage gives the chill of a museum or mausoleum, set center with a long, low vitrine showcasing a silver skull and two bunches of white lilies. Flanking it, farther upstage, are two empty, taller vitrines, even more chilling in their stature’s promise and refusal of a human offering.

Space and Cyberspace: URSULA ENDLICHER'S Internet in the Round

I entered a room with chairs grouped together like vector fields. Clustered in triangles and rows, each group faced a different direction. Where to sit? 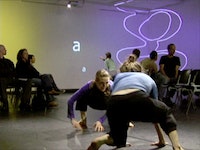 Enthusiasm, in its Greek root, refers to an inspiration from deep in the bowels, animating the body with an energy that is as biological as it is spiritual. Douglas Dunn is a wry enthusiast: he choreographs with the vital genius that devotes itself to a love for life being life.

It is an extremely difficult thing to translate ideas across languages, and perhaps more so to translate them across aesthetic forms and mediums. In William Forsythe’s Decreation, Forsythe attempts to translate poet-translator Anne Carson’s 2005 book of poetry, essay, and opera, Decreation, into a movement and language-based performance.

My favorite muscle in sixth grade was the gastrocnemius. A cohort of boys had become interested in sex, and I purchased a copy of Gray’s Anatomy, which had a complete catalog of images of human musculature, including the ischiocavernosus and bulbocavernosus...