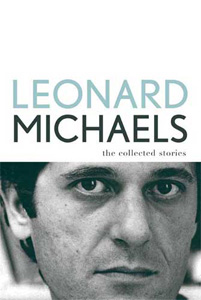 “Almost all of our friends were Jewish, black, homosexual, more or less drug-addicted, very intelligent, very nervous, or a combination of two or three of these things.”—Leonard Michaels

Leonard Michaels’s remarkable short story, “In the Fifties,” (1975) is a paean to a decade caught between the radical politics of the future and the doctrinaire beliefs of the present. A portrait emerges from a collage of one-liners and innuendoes of the author as a young intellectual with bohemian leanings. “I was godless but I thought the fashion of intellectual religiosity more despicable. I wished that I could live in a culture rather than study life among the cultured.” The pivotal moment arrives at the end of the sublimely comic litany—at times reading like rejected lines from “Howl”—to open onto the political landscape of a San Francisco demonstration that far exceeds Michaels’ expectations of the event.

About two thousand people were there. I marched besides a little kid who had a bag of marbles to throw under the hoofs of the horse cops. His mother kept saying “Not yet, not yet.” We marched all day. That was the end of the fifties.

The poetic tension arises from the marriage of simple, almost artless language, with the retrospective understanding that history was being shaped before one’s eyes.

Born in 1933, Leonard Michaels was in his 30s for most of the 1960s, allowing him the advantage of being both a slightly older observer as well as a participant, in the sea change of American culture. It was the era in which the marginalized proto-beatniks whom Norman Mailer famously analyzed in “The White Negro,” multiplied into legions of over-educated New Yorkers with inclinations toward moderate drug use, Rock and Roll, and existential angst. The four books of previously published short fiction that make-up The Collected Stories, are a testament and a love letter to this generation.

The stories are held together by the language of New York—from the beatnik-cliché of “like” as a modifier in hip conversation (“has, like, your body been celebrated?), to the Yiddish-derived idiom of Michaels’ childhood. The most successful stories retain the quick lucidity of journal entries, with ideas and quotations adding self-reflexive ingenuity to slim vignettes. Michaels never scales the absurdist heights of Donald Barthelme, but shares a propensity for formal experimentation and literary name-dropping.

Ubiquitous descriptions of stoned evenings of paranoia and intrigue are sweetly reminiscent of Woody Allen accidentally sneezing away his party companions’ cocaine stash—the perpetual and loveable neurotic mingling with the “hip” set, yet always on the outside of the real action. However, Michaels (like Woody Allen) has a darker streak which surfaces in many of his short stories. Rape, mutilation, beatings, and murder, often inflicted on the female object of desire, are described as just one more piece of the surrealist tableau of urban life. In “Crossbones,” a young Greenwich Village couple almost beat each other to death in their frenzy to appear as a respectable bourgeois couple to the girl’s father visiting from out of town. In “The Deal,” a young woman’s playful flirtation with a clique of street kids on a stoop moves from innocent bantering to a brutal animal-like attack.

Many of the stories suffer from not being developed beyond their obvious literary sources. The swashbuckling Jewish male anti-hero is an amalgam of the urban precociousness of Holden Caulfield and the sexual neurosis and bravura of Philip Roth’s Portnoy. Cheeky self-deprecation such as, “When the anti-Semites come to kill your mother, will it be nice to say you aren’t a barmitzvah?” which might have been shocking at the time, but now reads like filler from Annie Hall. While a line such as, “Green iridescent stars of David had grown from his nipples,” remains classic surrealism.

Reading Sylvia, the “fictional memoir” of Michaels’ failed first marriage, before diving into The Collected Stories, challenges the reader to make allowances for moments when the short story narratives choke on their own marijuana-induced fragmentation, or worse, read as hopelessly dated artifacts of an era. A portrait emerges of the writer as a desperately romantic young man who in 1961 has recently abandoned graduate school at Berkeley to return to New York. His only desire: “Not to have something to do, but to do something.” Sylvia Bloch is 19 years old going on 40; orphaned as a teenager, she is putting herself through NYU and living a meager existence in a shabby tenement apartment. The narrative of the rise and fall of their five-year obsessive co-dependency is fragmented by exquisitely captured miniatures of Greenwich Village’s last hour as a bohemian enclave in New York City. “Weird delirium was in the air, and in the sluggish, sensual bodies trudging down MacDougal Street.” The apocalyptic congestion of the neighborhood, the crowds of tourists, and the prevalence of hard drugs seems light years from the intimacy and innocence of the 1940s Village scene, lovingly described by Anatole Broyard in his memoir Kafka Was the Rage.

As in the short stories, Michaels’ interests always return to the literary—whether it is found in the obscene graffiti on the walls of the West 4th Street subway station or from the mouth of the newly infamous Lenny Bruce. “A hysterically funny dead-white rat-face attacked political hypocrisies and puritanical attitudes towards sex. He did a long routine on ‘snot.’ The word became the thing.” The historic moments and people of the decade are made tangible by writing that mixes the crispness of journalism with the singularity of poetry.

The all-night movie theaters of 42nd Street are described as “churches” that Leonard and Sylvia visit time and again to regain the strength to face each other and the city anew. “We carried away visions of despair and boredom, but also thrilling apprehensions of this moment, in this modern world, where emptiness could be exquisite, even a way of life, not only for Monica Vitti and Alain Delon, but for us too.” Either recalled from an old journal entry, or made-up thirty years later, it doesn’t matter. The memory speaks for Michaels as both an individual and as part of a collective culture that was constantly re-defining itself through the emotional language of film.

The Collected Stories concludes with the Nachman stories, seven sublimely tender portraits of the creative mind at work. The ubiquitous, neurotic writer has been replaced by the antithesis of hip—Nachman, a Los Angeles mathematician who analyzes each moment of his life with an elegant poetics of relativism. The literary self-consciousness and dense, stylized prose of the 1970s has been thoroughly absorbed into compact, fluid storytelling. Flashes of comic absurdity are still abundantly on hand, but are now linked seamlessly to the narrative. Italo Calvino’s final book, Mr. Palomar, a chronicle of an everyman sage, is an obvious predecessor for Nachman’s disarmingly simple meditations on existence.

Nachman always returns to the certainty that math-ematics affords him, a tranquil knowledge of the universe’s problems and potential solutions.

He yearned for his office and his desk and the window that looked out onto the shining Pacific. He’d never gone swimming in the prodigious, restless, teeming, alluring thing, but he loved the changing light on its surface and the sounds it made in the darkness. He didn’t yearn for its embrace.

Michael’s method is to reveal the complex forms of love that a profound commitment to a creative life affords.

Migrating Places, Diasporic Beings, and The Ghost of Our Loss (Collage)

In recent decades, memory has been assaulted from all sides. The designs and interests of the dominant hegemonic system, along with intercultural transmissions facilitated by knowledge and experience of the ways others remember and preserve their past—and, therefore, the existence of the universal culture of the mass media—represent a challenge to our supposedly differentiated past.

Hearne Pardee maintains a double life: one in the suburbs of Davis, California, where he teaches in the university’s fine arts department and another in New York City, where he keeps a studio on the edge of Harlem and maintains contacts in the city’s art world.

Tetsuya Ishida: Self-Portrait of Other

In the more than 70 works by Tetsuya Ishida now on view at Chicago’s Wrightwood 659, the late Japanese artist offers anxious visions of the individual within consumer capitalism. The haunting, darkly fantastical paintings depict men flayed, devoured, and exploited by industrial manufacturing and the fruits of its production.

Merril Mushroom came to New York City in the early ’60s like many queer people: looking for a home, excitement, a place she could be herself, and artists to hang out with and admire.