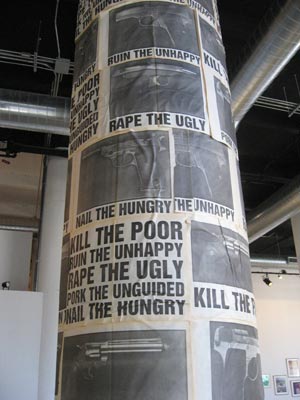 When I was in college in the 1990s, there was an emerging movement called Gay Art; it was akin to Feminist Art, but focused on radical Queer Theory and its impact on male gay identity. Gay Art embraced everyone from photographer Robert Mapplethorpe to artist Keith Haring, cartoonist Tom of Finland, filmmaker Bruce LaBruce and painter Attila Richard Lukacs.

The Male Gaze is a second look at a once-revolutionary movement that has lost some of its shock value yet continues to hold onto a very specific view of gay male aesthetics—not one that encompasses current political issues, like gay marriage or gay adoption, but that fixates on sex. Male Gaze (or “Male Gays”) is more effectively viewed as a slice of a certain variety of queer art than as a show with its finger on the pulse of a new emerging gay art movement. The exhibition in the big PowerHouse Arena space (which also houses the PowerHouse Bookstore) mixes equal parts post-Woodstock hedonism and AIDS-era activism with images of gay masculinity and social networking photos culled from the Internet.

Conceptual framework aside, there are some keenly powerful pieces, like AA Bronson’s playfully narcissistic mirror portraits, “From Mirror Sequences” (1969). The artist creates a photographic “through the looking glass” vision, in which where the viewer’s gaze is refracted endlessly, always away from the subject’s crotch, a tactic that serves to highlight the missing erogenous zone. The corresponding curves of the round mirrors and subject’s limbs swirl in a visual whirlpool—it quietly sucks you in.

In contrast to Bronson’s heady reflections, Joe Ovelman’s Post-it notes from 2005 are coy and playful. They are super-minimal jottings in a bubbly script that makes everything seem witty and urbane, even the obnoxiously factual “Refuse to Pay More than $25 for a Nineteen Year Old” or “Promise to Sleep With Party Promoters.” They come across as fragments of New York cocktail conversation, preserved safely behind glass. 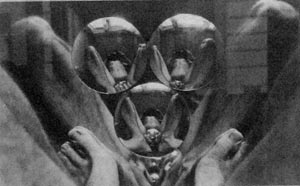 Another edgy talent is Qing Liu. His AIDS Walk images are sun-washed and uneventful, marking a humanitarian gesture with dull images, yet Liu’s word piece, simple scenarios of gay wish fulfillment written directly on the wall with a Sharpie marker, can be punchy and powerful.

Liu’s gay-friendly reality muses about Oprah coming out of the closet, Republican politician Mark Foley (who was embroiled in an intern sex scandal) getting shot, Laura Bush splitting with her husband and returning to her life as a librarian. The tone of Liu’s words are never overbearing; their mood is wistful and their ephemeral nature adds a degree of poignancy and protest to the words, like musings on a prison wall or the scratchings of a frustrated student on a desk or a chalkboard.

“Untitled (Kill the Poor)” by Robert Filippini (1997) is the most aggressive work in this show. His newsprint posters, with headlines like “RAPE THE UGLY” or “NAIL THE HUNGRY,” are sold for $10 apiece at PowerHouse Books, which, to complement the exhibition, has organized a table of gay-phenalia, including a limited edition work by Andrew Harwood, “Truckers Shower” (2004)—a signed bottle of Aqua Velva Ice Blue aftershave—as well as Karl Lagerfeld’s diet book and DVDs of Bruce LaBruce’s queercore flicks, like Hustler White, featuring hustlers and sex freaks.

I’m not convinced there is anything that should be labeled “Gay Art,” but if the term is simply a pretext to provide a forum for some interesting artistic talents to come together and exhibit interesting work, then there may be something there worth supporting, gay or otherwise.
—Hrag Vartanian

The Money Theory of the State

Kafka’s unfinished final novel, The Castle, can be read as a parable about the misrecognition of power.