Back in the 1980s, Brighton Beach had a little league field where mostly American Jewish boys and girls from the neighborhood played. I was one of those girls—there were three of us—and a star pitcher for my team. The field was snuggled between a synagogue and a pre-war building. Seabreeze Avenue and Brighton Beach Avenue, with its elevated train, bordered the other two sides of the field. We scored a home run either by smacking the ball off the back of the pre-war building or by hitting it over the right field fence to Seabreeze Ave., where the prostitutes hung out. By the fence that separated the ball field and the stands was a snack shed where mothers named Ruth worked rotating shifts with mothers named Sheila, and together they sold soft drinks, ices and knishes. 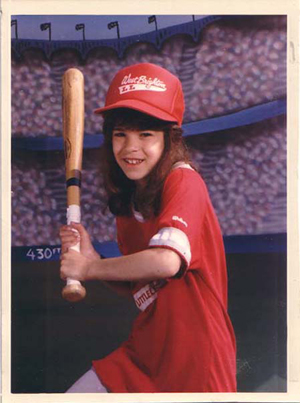 The author as a star pitcher, in the late ’80s

Our coach’s name was Avery. He was a handsome bald guy who would take his shirt off during summer games. Avery often put me in as a relief pitcher so I could undo the damage the former pitcher had done in the last inning. My pitches were swift and accurate down the center of the strike zone, so swift that on one sunny afternoon in 1989, I struck out three boys in a row and our team won the game. Avery picked me up, his shirt off, threw me in the air and screamed that I was the best. My dad, an amateur videographer stood nearby, taping the whole event: me, with my cocky smile lifted in the air, blue ices dripping down my chin, my best friend Michelle wearing spandex proudly smiling at me while my older sister Dawn vied for the spotlight.

Watching the film now, I see my neighborhood as it was then, with its fixtures of monolithic middle class high rise buildings, ice cream trucks, Jewish grandparents, my friends, the Coney Island boardwalk, and the West Brighton Little League field. These were elements of a neighborhood that in my nine-year-old mind remained static, impervious to change. 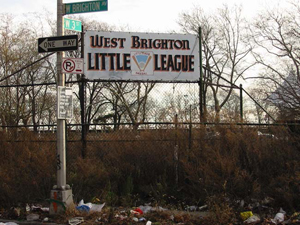 The West Brighton field before the sign came down.

But by 1992, urban flight had swept through my community and the West Brighton Little League field had gone out of service. The demographics were changing. The American Jewish kids and their families were fleeing the city in droves for Long Island, New Jersey and Florida, while Russians made their home in Brighton Beach. The ones who stayed behind, like my family, were the poor Jews that didn’t make it to the suburbs. My parents didn’t mind. They didn’t know any alternative to cramped vertical living.

It was like a war had ravaged my small neighborhood in the southern-most corner of Brooklyn and suddenly all of my friends were MIA. I shouted to them:

“Nicole, Jessica, Alyssa, Jennifer, where are you? Are you hiding under the new Russian Panda sushi bar sign? Remember when we used to hide behind dumpsters and trash heaps? That was fun, but whatever. Guys—we’re like 12 years old, we don’t need to play hide and go seek anymore. Let’s play a teenage game. Where are you?”

We live in Freehold, NJ. It’s different but the boys are cuter and it doesn’t smell as bad as Brooklyn. Plus people talk in English.

I haven’t spoken to them since.

As I was searching for my friends behind dumpsters, the Russian population exploded in Brighton Beach. Russian cafes took over Jewish men’s social clubs, Russian conversations drowned out Yiddish chatter on the street, and Russian children played soccer, not baseball. The West Brighton field lay idle for nearly 20 years. By 1995, my childhood ball field turned into a mound of overgrown weeds—a haven for dirty diapers, car parts, air conditioners and other items that never made it to the Fresh Kills landfill. The weeds had grown so tall that they crept over the fence and onto the sidewalk. I didn’t grow up with nature so I didn’t mind the trek through this urban forest of neglect.

In 2003, I made a feeble attempt to convert the field into a community garden for the neighborhood’s flourishing senior citizen population. My proposal was rejected by my local councilman and I knew that no meant something more ominous and foreboding. I had the feeling a developer or the City had plans to build up this lucrative piece of real estate and turn it into something more profitable than a place where retired people harvested organic food to fill up their dwindling time on planet Earth.

So it came as no surprise when a few months ago I saw that the giant 1970s-scripted West Brighton Little League sign had been removed. Growing up, this sign symbolized my gateway to an afternoon or evening of childhood exhilaration. I looked forward to fielding balls and striking out anybody who faced me on the pitchers mound.

The field, now boarded up with blue wood, is being turned into a 22-story condominium complex, replete with underground parking and a luxurious pool: the solution to the West Brighton Little League problem. Goodbye Mitchell-Lama housing and hello to another gaudy environmentally-unfriendly slab of new wealth.

Boy, are those Brooklyn families sorry they moved from the neighborhood. If you owned your apartment in Brighton Beach now, it could be worth half a million. Mine is. Poor Jew that didn’t make it—I don’t think so.

The 22-story condo complex being built on the West Brighton field, will not, I predict, have the kind of dynamic where parents stick their heads out of the window to shout for their child to come home; where women sit on benches and gossip about you then tell your mother all the naughty things you did; where you size up your athletic prowess against Ian Rosenblatt, the best athlete in the building, only to come face to face with him as he pitches you fastballs and strikes you out the next afternoon.

I remember those days right before computers took over the world and our parents trusted that we could play alone with our friends in the park at night. But with such rampant urban renewal, a new era has been ushered into New York City. The boroughs, perhaps Brooklyn especially, are claiming a different identity. We used to be the doughboy idiots and brutes in the movies, the Italian girls with thick accents, the grotesque stereotypes of Joey, Vinny, and whiny Jews. We lacked class, culture and worldliness.

Maybe these stereotypes contained a grain of truth. But here’s what we never lacked, and what I hope those up on the 22nd floor learn from us: how to raise and take care of children, on open fields with blue ices and home runs.

Frankly and simply put, this new 22-story condominium is going to ruin my view.

Samantha Berkley is a writer, teacher, and musician living in Brighton Beach. She has also worked as an oral history interviewer for the Coney Island History Project.