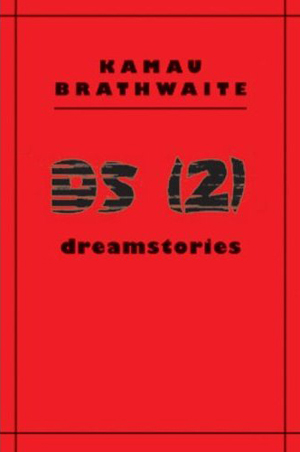 At the end of each of the narratives in Kamau Brathwaite’s new book of stories DS (2): Dreamstories, the West Indian poet provides a précis of the piece’s compositional history. For example, his exquisite reminiscence of the literary critic F. R. Leavis, one of Brathwaite’s tutors at Cambridge, was written in 1954; revised in March 1999 at CP, presumably Cow Pastor, Barbados, where the poet was born and continues to spend much of his time; revised again in May and June of 2003, in New York, where Brathawaite teaches at N.Y; “reform[ed]” on July 16, 17 and 31; and revised again on November 21. Finally, the piece was subjected to a process called kerning, a smoothing by minute space adjustments that creates an even right-hand margin and can now be accomplished by a standard word-processing program.

The kerning is important. No writer I know of, and certainly no writer of such stature, has been as sedulous as Brathwaite in pursuing the expressive opportunities offered by the modern technologies associated with writing. The poet is an orthographic extremist, and for this reason, DS (2) is daunting to read at first. A host of idiosyncratic effects characterize his pages: text fragments in different fonts, of vastly different sizes, flush right, flush left, indented, centered and in kerned columns; text that is fenestrated by gaps, gulfs and fissures of white space. His fretted print puts up resistance, but it requires us to recognize that reading is a physical activity, and more importantly, a physical activity with political dimensions. While peering and peering at Brathwaite’s words, it’s impossible not to be reminded of how much mendacity is delivered into our brains by the easy reads we pick up at the newsstand and obliviously consume on the subway after a day’s work.

The political dimension of his orthographic extremism—or, rather, the fact that this political dimension is inalienable from every other aspect of his work—is what distinguishes Brathwaite from other poets of the post-industrial, postmodern avant-garde. Though his writing can superficially resemble his contemporaries, the secret spring of his graphic obsessions lies far removed from the ideologies of experimentalism. He was born in 1930, only five years after Frantz Fanon and twelve years after Nelson Mandela. He is a member of the first, select generation of post-colonial intellectuals, the generation that was called on to represent its people and witnessed the Algerian war of independence and the assassination of Patrice Lumumba. There is probably no writer of that (insufficiently celebrated) generation who has felt so keenly, and responded so vigorously to, the burden of the colonized and ex-colonized mind forced by circumstances to think and work in the language of its colonizer.

Unlike his contemporaries, Brathwaite’s response has not stopped at his masterly use of patois, his neologist fabrications, his constant, inventive word play, or his collagist appropriations of other tongues. It has extended itself to all the hidden transactions in language, down to the very typefaces being employed. Writing for Brathwaite has to be made apparent as writing, in order to flush out the technologies of power that infect language in its habitual uses. He has chosen not just to master the language of his colonizer but has gone ahead and changed that language, and changed it so completely, and with such force, that one can almost believe he has redeemed English from its complicity in the sorry imperialist enterprise. The radical Brathwaite page is an invention born out of necessity; and its success in rendering a painful history is a testimony to both the poet’s substantial powers and to the strange, revivifying surprises that literature can offer.

In one way or another, all the stories in DS (2) are concerned with the passing of time and the movement of history as experienced by an individual. They end with a retrospective account of their making. They begin, more often than not, by the indirect, circumspect action of memory. “Now that I think back,” the phrase that opens the story “Black Angel,” could stand as the motto for the entire book. These tales take place across the theaters of Brathwaite’s experience—in Africa, where, as an Africanist poet from the Diaspora he spent many years as a young man; in Britain, where he studied at Cambridge after World War II; in pastoral Caribbean settings. The writer has a unique connection to the sea, which appears as both a lovingly rendered natural force and, in “Dream Haiti,” a desperately vivid story about Haitian boat people, as the roadway of the “endless purgatorial” middle passages of African enslavement.

Read individually, these pieces of prose present themselves as shapely, limpid narratives, and they remind us that along with all the other things he has been, Brathwaite is also a casual master of orthodox English writing. But to read the stories in DS (2) individually, to reduce them to literary artifacts, would undermine their purpose. This book is best read—and ultimately can only be read—as a memoir that comprehends the individual known as Kamau Brathwaite, his fictional alter egos, the stunning arc of his personal history, and all his identifications and allegiances, not excluding either Haitian boat people or a formidable, ailing F. R. Leavis, Cambridge theorist of the Great Tradition and champion of D. H. Lawrence, who himself mourned bitterly for the white race.

To read DS (2) is to come into contact with its author’s consciousness, to experience at a cellular level its inflections and refraction and get a sense of the history it has endured. The experience is a thrilling one that transcends the ordinary experience of literature. We are lucky, in our bleak time, that this poet is still at the height of his powers.

Vijay Seshadri is the author of two books of poems, Wild Kingdom and The Long Meadow. He lives in Brooklyn and teaches at Sarah Lawrence College.

Partial Reveals & Inclusive Revelations in the Post-Truth Simulacracy: The Poetics

The Poetics is interested in exactly this conjunction, and Ives questions both the narrative of history and the history of narrative as a form in elaborate, strident observations that are illuminating and speculative.