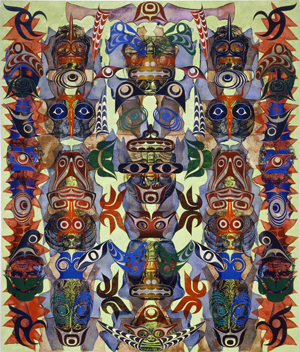 Since the ’80s, Philip Taaffe, currently showing at Gagosian Uptown, has been experimenting with borrowed imagery. Early pieces copied Barnett Newman or Ellsworth Kelly paintings almost in toto, with the addition of a rope motif collaged onto the canvas. That Taaffe has always declared his affinity for color field painters like Newman and Rothko is odd to me; every decade seems to have added another layer of business to his canvases. One painting at Gagosian has watery purple and red strokes over a butter yellow ground under crescent moon shapes, all overlaid with a grid made of Buddhist-looking flame circles. Another canvas, Dryadic Figures, has an ombre background shading from blue to green, with floating asterisks, Stonehenge-like shapes, and leaves of grass growing out of the bottom edge. The asymmetrical grid or mesh laid over most of the canvases is usually either a motif borrowed from another culture—Mayan, Islamic, whatever—or else some taxonomy of leaves, shells, even knives. Taaffe has said that “the cumulative effect of continuous applications of line and color” is to create “some kind of actively structured field…an entrance to a trance-like state.” The intent is a combo of Op and Joseph Campbell, an almost mystical belief in the power of pattern.

So what’s my problem with it, apart from my liberal arts programming? An image taken wholesale from one’s own culture—a Ballantine’s Ale can—when fetishized as art, brings with it levels of irony and deconstruction that seem appropriate to something that began life as a commodity. I would say precisely the same thing holds true for the face of Marilyn Monroe. But a mask or tattoo borrowed from some vaguely South Pacific culture is a theft bordering on a joke. It brings to mind Milan Kundera’s definition of kitsch as the unquestioning and sentimental celebration of the world as it is. This is the symbolic universe as a delightful pupu platter from which Taaffe can whimsically snack.

None of this would matter as much if the paintings were better, but they are too busy and at the same time wan, their translucent or marbleized layers squashed down by the relentless enmeshing of the canvas. In the past Taaffe has been at his best, as in Necromancer, from 1991, when keeping his surfaces simple and his symbols open and, if not sui generis, at least hard to place. On the other hand a crowded painting of police targets from 1983, Martyr Group, exemplifies the bombast of the decade without much beauty, and sets Taaffe’s agenda squarely on the path that has led him here: an appropriated symbol meant to carry the painting on its own strength, repeated often. It’s too easy, and, at the same time, his overelaboration of his surfaces diminishes any imagistic tautness the works might borrow. In the end painting is not “about” the symbols it depicts, but about painting.