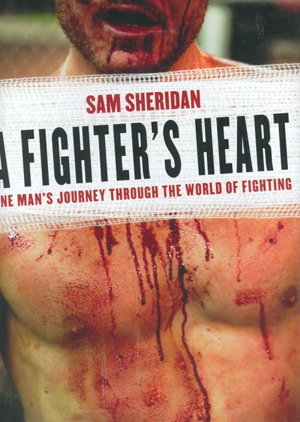 Fighting has long been the metaphor of choice for writers to explore issues of masculinity and courage. Willfully exposing yourself to danger, whether in a boxing ring or, as in Hemmingway’s case, the bullfighting arena, seems to elicit some transcendental truths about the nature of man. Following in the footsteps of a long line of writers enamored with the picaresque world of combat, Sam Sheridan abandons the bourgeois security of his Ivy League roots and plunges fists first into the kick-boxing rings of Thailand and later into the caged arenas of the exploding new sport of Mixed Martial Arts, better known among casual enthusiasts as Ultimate Fighting. The Rail caught up with Sheridan to talk about his new book detailing his experiences in the ring.

Rene A. Derifuss (Rail): In what ways is MMA (Mixed Martial Arts) no longer fighting?

Sam Sheridan: Do you mean brawling? It hasn’t been brawling for ten years, although sometimes it can look that way. MMA has evolved to the point where it requires virtuousity of technique—Olympic caliber wrestlers and Judo players, lifelong brilliant athletes who have taken jiu-jitsu to wholly new planes, and excellent technical kick-boxers who can compete at the highest level. Of course, not everyone can do all things equally well, which is where game plans and strategy, the “chess match,” come in. But everyone can do most of these things, and at the high level. Anyone with a serious weakness in their game—say, a great wrestler who can’t box at all—will get slaughtered. That said, it’s still fighting, and savagery, size and strength play a major role. You’ve got to have those things, but you can’t rely on them.

Rail: Is there a mixed martial arts tourist industry around the world? You talk about training in Thailand and in Iowa—is there a circuit of guys who travel? Searching for what?

Sheridan: That’s absolutely right—the MMA tourism industry is new and small and still somewhat professional. Young pro fighters will travel to Japan and live there, or Brazilians come to the U.S., or Japanese will come to Brazil. They’re searching for ways to complete their game, to round out the places where they’re weak—the Brazilian grappler who’s spent 10 years rolling around learning jiu-jitsu might take six months at a Muay Thai camp to try and address his stand-up. And there are a lot of people who are sort of “devoted hobbyists” and can go for weeks or months to train, but will never fight at a high level. And the number is growing all the time. They are searching for ways to improve themselves, to become a better fighter—which in turn is a search for freedom from fear, I think. As well as other things. There’s a million reasons but they’re all the same reason, if you know what I mean. Why do you fight? To anyone reading this, why do you train?

Rail: Halfway through the book, you suffered a shoulder injury that put you out of training. For athletes at the contender levels, the temptation must be enormous to use steroids to heal their injuries. Can you understand the temptation? Did you see much evidence of steroid use?

Sheridan: Anyone who thinks that steroid use is isolated to a few is living in a fantasy world, and that goes for ALL professional sports (okay, not golf). After a while, you can just see it and tell from the way a guy look-the way his skin and muscles look. I can certainly understand the temptation. I was looking at all the other guys with “shoulder-envy,” all covetous, when I was hurt. But the juice wouldn’t help with that injury (an umbral tear in the rotator cuff). HGH [Human Growth Hormone] might have.

Rail: Do you see a larger context in the subject? Or is it just what it is?

Sheridan: Yes, I do see a larger context to fighting, for a billion reasons. It’s about life, it’s about art, and it’s universal. Much, much better writers than me have addressed the subject. Ronald Levao wrote that “A great fighter redefines the possible.” Norman Mailer, The Fight—Carlo Rotella, Cut Time.

Rail: Beyond the obvious introduction of the internet, how has writing about fighting changed since, let’s say, A.J. Liebling or Red Smith?

Sheridan: I wouldn’t say fight-writing has changed as much as society and fighting itself has changed. Everyman’s personal connection to violence is much more tenuous. Coming into and out of the Depression, fist-fights were a common pastime for boys and young men. That has changed.

Rail: What happened to boxing?

Sheridan: Well, as Liebling noted, television happened. When you can see great fights on TV, you stop going down to local clubs. So the local scene was put under pressure. Football’s ascendancy, the Cold War focus on team. Fighters admitted throwing fights in order to get title shots, and the ties to the Mob became clear—fights became less trustworthy. Mis-matches and Don King owning all the heavyweights, and they used to say, “as the heavyweight division goes, so goes boxing.” Ali’s fall into boxing-induced Parkinsons. Athletes can make more money and not get hit in the face.

Still, there is a lot of boxing on TV, and as cable grows so does the need for it. De La Hoya vs. Mayweather could break records for Pay-Per-View buys, which would show a sport evolving away from the need for heavyweights. Those guys, those athletes, are all playing football or basketball anyway. The Heavyweight Champion of the World was considered the be-all and end-all of manhood, and that has long since faded away.

Rail: In terms of the historical spectrum—from author as duck killer and boxer to sensitive young ectomorph—where are you?

Sheridan: I’m a sensitive boxing mesomorph…and I would kill the shit out of some ducks.

Rene A. Dreifuss is a competitive MMA fighter and doctoral student in Japanese History.

Rene Ricard’s poems here, despite dating from the 1980s, encompass much of his life in all its brilliance, disordering of the senses, self-confidence, and self-immolation.

The Foundation for Contemporary Arts

Charlotte Kent profiles the Foundation for Contemporary Arts and finds the the venerable institution as nimble and necessary as ever.