Colin Denby Swanson’s Atomic Farmgirl paints Fairfield, Washington as the epitome of one vision of the American West. It’s farm country, a land of clear, blue sky and limitless fields filled with wheat, barley, cows and horses; a peaceful place where humans, animals and crops live closely and depend on each other in a way that seems old-fashioned, lost in time. 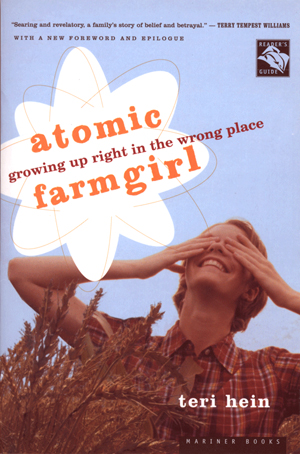 But there’s also something deeply wrong with this landscape, Colin makes clear, something haunting and dangerous. After all, Atomic Farmgirl is also the story of how and why this seemingly blessed land is cursed, blighted by a history of betrayal, murder and ends-justify-the-means war-making that makes true peace impossible to find.

“What’s so remarkable about this story is that it’s normal, it’s about a normal place,” Colin says. “And underneath the normalcy, there’s something wrong. But it takes three decades to figure out what that is.”

“That” is Fairfield’s contamination from its proximity to the Hanford Site, a U.S. government nuclear complex where we developed the plutonium to support the Manhattan Project and to build “Fat Man,” the atomic bomb we dropped on Nagasaki. The 586-square mile site actively produced plutonium from WWII and through the Cold War, when our understanding of the dangers of nuclear radiation lagged far behind our desire to wield nuclear weapons. Through carelessness and through purposeful experimental releases of radiation from Hanford, Fairfield was and is the victim of accumulated radioactive contamination many times the level of the Chernobyl disaster. Now, Hanford is at the center of the world’s largest environmental cleanup. The government and Hanford-area residents are still litigating what is owed the contamination’s victims.

The opportunity to combine past and present was partly what attracted the Drilling Company to develop and, this November, to produce Atomic Farmgirl, says Hamilton Clancy, the group’s artistic director.

“It’s interesting, when you delve into the background of the play, to be doing something that not only did happen, but is still happening,” he says. “The play is a very unique opportunity to address several ongoing issues with one story.”

The play doesn’t confine itself to the legacy of nuclear contamination, he emphasizes, but broadens its perspective in both the issues it explores, and the history it relates. In Colin’s play the Hanford disaster is simply the latest example of the violence visited this land. A brutal history dates back, perhaps, to humans’ first arrival across the Bering Strait; and, if not that, then to the “Indian Wars” of the 1800s, when the U.S. Army chased American Indians from their land to make way for homesteaders from the East. With Hanford, the backdrop of Atomic Farmgirl is the curse put on the land by Whiet-Alks, an American Indian who witnessed her husband’s betrayal and lynching by U.S. cavalry in 1858.

Atomic Farmgirl is based on the memoir of the same name by Teri Hein, a woman who grew up in the radioactive shadow of Hanford watching her father, friends and neighbors suffer disturbingly high levels of thyroid, brain and other cancers. Some survived, some didn’t (some survived, then didn’t the second time around), but the news that another friend or neighbor had developed cancer was commonplace to the point that Hein and her sisters knew to expect the announcements; Christmases became defined by whatever bad news dropped that year–Thyroid Cancer Christmas, Brain Hemorrhage Christmas. Like Hein’s memoir, Colin’s play is about a community–the Heins, their ancestors and their neighbors–holding it together, keeping on until the terrible truth becomes unavoidable.

“This is a family values play,” Colin says. “It’s a play about Lutherans. It’s about people of faith. It’s about small-town values. They don’t want to go to lawyers. They’re patriotic–this is the place where we built the bomb we dropped on Nagasaki. This is a patriotic community that resisted this information for years, and is still resisting this information.”

The Drilling Company’s production emphasizes this sense of community by casting a full 10 actors, many of them double-cast to play multiple roles that span generations and cultures. The idea, Hamilton says, was to create a snapshot of an American community as it is now, much like Our Town presents a picture–now iconic—of turn-of-the-century America.

Atomic Farmgirl is also about the Hanford community by a definition that reaches back more than 150 years—homesteaders, American Indians and today’s inhabitants are joined by their connection to the land they call home and the violence they suffered and perpetrated. Whiet-Alks is a ghost, one of the many who inhabit the play. But her purpose is less to exact revenge than to demand honest acknowledgement of the crimes against her and all Hanford residents through the years.

She visits the Hein matriarch, Dolores, to persuade Dolores to speak out against the government’s betrayal. Whiet-Alks is sorry for the curse she placed on the land, but she still refuses to be silent about what happened to her and her people. But when Whiet-Alks visits Dolores, Dolores is all about silence and suffering through. Through all the cancers, hospitals and deaths, she’s going to wash dishes. That’s in the 1970s. By the 1990s, however, even she has had enough–the most contemporary story woven through Atomic Farmgirl is Dolores’ crusade to make known the truth about Hanford.

Atomic Farmgirl is not about victimhood, and it’s not a movie-of-the-week (“one woman’s fight against overwhelming odds…”). It’s the story of what is done and what has been done to make the world we live in. If that’s not always a pretty picture, the play suggests, there are some things that we—that anyone–can do.

Justin Boyd is a playwright, screenwriter and co-editor of the Theater section of the Rail.