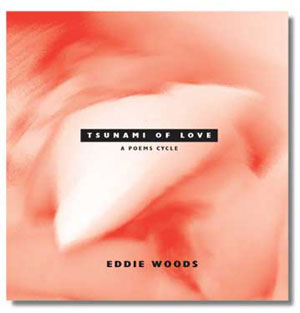 There is a riveting line in Deleuze and Guattari’s Anti-Oedipus: “One only makes love to worlds.” How to understand it?

Obviously, when one finds a partner, that person brings with him or her a host of connections, family attachments, networks of influence and power. More: This person has a particular history, a trajectory to which (in most cases) the lover gradually becomes privy. Still more: The lovers have been conditioned by a milieu, a social atmosphere, to which they are constantly oriented and to which they cling. And above all, there is this: The type of worlds joined, the way the romance progresses (whether it deteriorates or flowers), and through what stages—all this can be read as one of the deepest comments we are likely to get on the course of history flowing around them.

I bring this up in relation to the new spoken-word CD by Eddie Woods, Tsunami of Love: A Poems Cycle. The lyrics included are rooted in a passion that never stops ascending—though the feeling is one not of triumph but of regret. The speaker (for simplicity, I will identify him with the author) is engaged in raking over the white-hot embers of a suddenly unrequited love, one which had been requited with interest for six previous years. However, beyond this, the poems offer an appreciation of fuller historical issues, adding a greater gravity, and allowing them to be deservedly set beside other masters (one of which I will mention in a minute) of the dissection of failed love.

Without frills, the CD (drawn from Woods’s book of the same title) gives us the unaccompanied voice of the poet, calm and warm, narrating the story of a freewheeling expat who begins an affair with a reformed bohemian globetrotter—a woman who, eighteen years before, retired from trekking and has raised a sweet family in the Devonshire countryside. Meanwhile, the expat has settled in Amsterdam and is mucking about in the artistic over- and underground, still carving and helping others carve ramparts of light. Yet, for these eighteen years, like birds, letters have passed between them, each fascinated with the other’s world. The feelings grow so fiery that each new message arrives as charred scraps in the envelope. Woods decides to make a bitter sacrifice: He will give up the cosmopolitan lifestyle, the easy confluence of races and tongues as well as the nourishing literary stew of Amsterdam, and move in with the divorced Jenny and her kids, who live in a wholesome backwater.

Before proceeding deeper into this work, let me, by means of examples, ask two questions, though the answers may appear obvious: (1) What draws people from such diverse circumstances together? (2) How intense is such passion likely to be? My illustrations concern Nadja and Nhi.

1. A couple similar to the one depicted in Tsunami: a male avant-garde artist and a “woman of the people,” is found in Andre Breton’s Nadja trilogy. Breton is attracted to the heroine Nadja from two directions. On the one hand, as he writes in Communicating Vessels, the surrealist project, no matter how valuable as an aesthetic movement, does not affect everyday existence. “I feared to see everything that such a project omitted of my life and my personal aspirations. Surrealism, as many of us had conceived it for many years, should not be considered as extant except in the a priori nonspecialization of its effort.” That is, it should have gone beyond specialized activities, i.e., the creation of art, and meddled with the quotidian. But it hadn’t.

Dissatisfied here, he is also perturbed by what he sees as the defeatism of the working class. In Nadja, he writes, “-People cannot be interesting insofar as they endure their work…How can that raise them up if the spirit of revolt is not uppermost within them?” What he really admires among them are those few who protest against stultifying working conditions. “It is not the martyrdom one undergoes [at a benumbing job] which creates this freedom [of revolt]. It is, I mean, a perpetual unfettering.”

The gamble in the alliance between Breton, a dissatisfied intellectual, and Nadja, a schizo streetwalker, is that together they may make “the relatively long but marvelous series of steps which a human may make unfettered,” which neither could make on their own, confined in his or her class circumstances.

2. Whatever the results—and for Nadja and Breton, they are unhappy ones—I would hold that the uneasiness, danger, and trickiness of attempting such a connection of very separated worlds will, as long as it lasts, produce a powerful eroticism. At the risk of sounding like a blowhard, let me use my relation to Nhi, my wife, as an illustration. She lived in Saigon until she was twenty-seven, while I grew up in a totally opposite environment in Chicago. Neither of us had been very libidinal before we met, but found each other transcendentally energizing. I remember, this summer, after more than twenty years together, the spark was still strong. On vacation, we were shopping at a small store. Nhi liked two bathing suits, but the store was so small it had no dressing room. My wife and the owner made this compromise. She would pay for the two suits, take them to our hotel on Beijing Lu, try them on, and return them if she didn’t like them. Neither fit. But there in the smoky afternoon light of Guangzhou, and the ambiguity of her dressing and undressing, we ended up spending so much time in bed that the shop was closed by the time we got back. No, this is not testimony to some particularly powerful sex urges, but (I believe) a byproduct of the tension generated (lifelong) by the interlacing of two near-incompatible ways of being.

As to this last point, Woods gives an even greater depiction of the raving ardor, sometimes dreamily sensuous, more often searingly charged, of the red-light lit linkage of people from two different worlds. He says, “My constant desire / Couldn’t conceal itself. / There you were / Snuggled up close / And that aroused me.” Later:

I didn’t always signal my lust in rock-hard fashion

Jenny proves equally hot-blooded. Yet, six years on, the psychological and physical fusion of these two people ends abruptly and disquietingly when Jenny dumps him. The CD is the writer’s uncomprehending (on the surface) attempt to deal with the aftermath of her sudden shutdown, which goes beyond recriminations and silence to a total obliteration of their life together. “Every vestige of me is gone: / Correspondence, photographs / Whatever there was to remind / Ripped up and reduced to ashes.”

If there is a stone unturned in Woods’ anatomy of what a broken-hearted lover feels, I can’t find it. He chides himself for missed opportunities to be understanding: “In place of soft-pedaling / I might have asked you more: / About what you liked, didn’t like.” He imagines alternative scenarios: “Was playing house a mistake? / Could we have kept loving alive / by loving at a distance?” He even, in a perverse bit of self-torture, arouses himself by thinking of her with a new lover.

When you fondle his balls, I cup your breasts

As he parts your legs, I softly stroke your thighs

The great open strength of the CD is in the unrestrained outpouring of loss, which is conveyed through the scrupulously lucid inner observation of a soul (his own) in torment.

There is also a hidden strength. He hints, not accepting it himself, that one major stumbling block to their relationship was outside forces. “Hey, it’s not saying loads for country folks / When someone has spent six years / Sharing a semi-detached dwelling / And never once been invited / To visit his next-door neighbor’s place” This is the submerged theme of the CD, that the worlds of bohemia and the English countryside are not unitable.

A deeper reflection comes from Breton, who argues that the system (as it were) sets social barriers between the Bohemian and general working-class milieu since the former’s ideals—work only at what pleases you, put beauty above commerce, and so on—would (if widely disseminated) be fatal to this civilization. Breton minces no words, writing in Communicating Vessels, “The single result [of my thought process] was to confirm me in my opinion that only a radical social change whose effect would be to suppress, along with capitalist production, the very conditions of ownership special to it could cause reciprocal love to triumph on the level of real life.”

To return and summarize: From two ends, Tsunami of Love repays scrutiny. It charts, with an unerring sense of the right words, the intersecting stages of a wronged lover’s grief while, at the same time, in a more sociological register, the book makes a remarkable commentary on the continued marginalization by the mainstream (here, English rural society) of the very ways of life that offer the only bearable way to enter the future.

Love Power Peace (the title comes from a James Brown album) exemplifies Sidibé’s magic, showcasing never seen before photos in an exhibition that confirms his status as a cultural icon.

Before I consider a personal book, perhaps I should offer a personal story. My first substantive encounter with David Shields, following some long-distance business, was an interview for his 2017 selection of essays, Other People.

Collaboration in Printmaking: An Influence on Creative Thinking

I have often wondered how artists feel about working in printmaking. Does it influence their creative thinking in their primary medium? Do they enjoy working with another person to make their images? Are they excited about the act of printmaking or is it just another source of their livelihood? I have asked several to express their opinions and hope you find their responses informative.