At a performance by the “gypsy-punk” band Gogol Bordello, you don’t just feel the music. You let that feeling out—sweating, stomping, and springing into the air—because you can’t hold it in. Prodding the crowd, violinist Sergey Ryabtsev pumps out sweet, fast melodies, slicing the strings with his bow and shooting lightning bolt after lightning bolt into the audience.

“I don’t just want to play music,” says Ryabtsev, a forty-eight-year-old, classically trained Russian violinist. “I want the mysticism that I feel to get transferred to the crowd.”

Like Gogol Bordello’s live shows, Ryabtsev’s life journey has been full of wild surprises, improvisations, and revelations. After his first concert with the band seven years ago, an experience that genuinely frightened and intrigued him, he was hooked. He traveled to Brooklyn from Russia in the 1990s not expecting to play violin for a living or even stay, but he ended up doing both. And now that the band’s popularity is rising, Ryabtsev is beginning to get worldwide recognition.

Because most of his fellow band members are in their thirties, Ryabtsev, who admits to looking older than his age, stands out on stage. He has long, silver hair, a trimmed, gray beard, dark brown eyes, and a round gypsy earring dangling from his left ear. He speaks English with a noticeable Russian accent.

Ryabtsev’s violin style is unique: He plays doubles—the root note of a scale together with its octave, or with the third or sixth note—which makes it sound as if more than one violin is playing. “That’s my own technique,” says Ryabtsev, in Russian, “and it’s perfect for gypsy-punk.” Soon he corrects himself, contending that Gogol Bordello is neither pure gypsy nor pure punk but something entirely different. “Gogol Bordello is a cat with three heads. It’s something that shouldn’t exist.”

Ryabtsev speaks in a charged manner, with wide-open, unblinking eyes and rapidly moving hands and arms—sometimes with one hand punching the palm of the other to physically italicize his words. The band, he says with his lips and hands, is all about life. “Gogol Bordello is not only music. It’s an ideology: our relationship to life, people, possibilities.”

Sitting in the modest kitchen of the one-bedroom Ocean Parkway apartment where he lives with his wife, Ryabtsev is sipping Chianti and wearing a black, sleeveless Gogol Bordello T-shirt. The bookshelves of his living room are filled not only with Russian classics—collections of Chekhov, Pushkin, and Dostoevsky—but dozens of magazine and newspaper articles about Gogol Bordello, a collection he’s very proud of. And of course there’s a copy of the book and movie Everything Is Illuminated. (In 2005, alongside Elijah Wood, Gogol Bordello frontman Eugene Hütz starred in the film, and the band contributed to the soundtrack.)

Ryabtsev, who has studied violin from the age of six, learned his first life-lesson at seventeen. His father, an engineer, was drinking vodka with his workmates in the kitchen and called his son to play violin for them. Most of them had never heard a violin, and one had never even seen one.

He hesitated until his father called him over and whispered, “If you don’t play now, they will never get a chance to see this again.” So he played. And when he finished, his understanding of music had changed. He realized, he says, that “music is a big part of real life.”

Ryabtsev spent another nine years studying violin and then dropped out of the conservatory, where he felt the connection between art and life didn’t exist. “I was suffocating in that elite atmosphere,” he says.

Ryabtsev became a theater actor and then a director. When he arrived in America in 1994 for a theater conference in Connecticut, he had no idea that he would end up staying. After the conference, he went to New York City in search of a job, maybe as a dishwasher, so that he could bring some money back to his family. But he found nothing. When his new Russian friends suggested he play violin on the street, he was very reluctant. But his insistent buddies took him to Brighton Beach Avenue and told him to play. “See this pack of cigarettes?” one of them said. “You’re going to play until we finish it.” People came up to compliment his playing, wish him luck in America; one woman even brought him a suit. “What planet is this?” he wondered. In three hours, he had made $45. He was amazed. 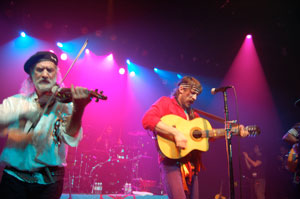 “I came from Russia, where nothing was happening,” he says. “I knew what my life was going to be like for the next twenty years. But here, I didn’t know what was going to happen in the next moment.”

He played violin in Brighton Beach for a year, where he was approached by locals, weekenders, fellow Russians, conductors, and even mobsters. He began playing at Russian restaurants. Every day was an adventure.

But nothing could have prepared Ryabtsev for Gogol Bordello. In 2000, after a night of playing with his Russian gypsy band at Moscow, a now-defunct Russian restaurant in Manhattan, Ryabtsev was approached by Eugene Hütz, founder and frontman of Gogol Bordello. Hütz—tall, thin, flamboyantly dressed, and sporting a vaudeville mustache—came out to hear him play violin, but having missed the performance asked him to play another set. The band and the restaurant owner complied, Hütz explains in his Ukrainian accent, “because I had a lot of American girls with me.”

After hearing him play, Hütz told Ryabtsev, in Russian, “I have a well-known band. We’re playing Joe’s Pub tomorrow. Can you play with us?”

“Tomorrow? What kind of music do you play?” said Ryabtsev.

Ryabtsev was sure he was dealing with “a madman.” To this day, Hütz’s reply—a distant echo of what Ryabtsev’s father told his young son in the kitchen—puzzles Ryabtsev and makes him laugh boisterously.

Hütz gave him Gogol Bordello’s first CD, Voi-La Intruder, and told him to give it a listen before the show. Ryabtsev had never heard anything like it. “With horror I wondered where a violin could fit into this music,” he recalls.

The next day, he arrived at Joe’s Pub with his violin in hand. Being a classically trained musician, Ryabtsev put on a tuxedo and waited for his cue. When he finally came out on stage, he was stunned. People were half-naked, drinking from bottles and dancing crazily beside broken furniture. Hütz, standing on top of the bar in his underwear dancing with two women, yelled in Russian, “Sergey, play!”

After finishing the song, Ryabtsev, in amazement, began to walk off stage. Hütz grabbed him. “Where are you going? Play!” Ryabtsev pleaded, “Play what?” Hütz yelled back, “Whatever you want.” Hütz was confident in Ryabtsev’s ability to improvise, and he ended up playing for almost an hour. After the show, he says, he felt infected with “the virus of freedom.”

On a recent Thursday night at Mehanata, a Lower East Side dance club that’s home to some of New York City’s best Romany (the preferred term to “gypsy”) and Eastern European music, Hütz—who DJs regularly at the club when Gogol Bordello is on break from touring—waxed lyrical about Ryabtsev. Asked to describe him in one sentence, Hütz said, “I can describe him in one word: supernatural.”

It turned out he had more than one word. He approached minutes later with a cup of red wine in hand, smiling, shirt unbuttoned, and said he had more to say. The first time he saw Ryabtsev play at the restaurant, “I heard all my songs in my head and I knew he was gonna slice all over them…He’s more than what I hoped for because of his artistic and theater background.”

Ryabtsev says that after coming to the United States, two events have had the most profound impact on his life: meeting his (third) wife, Olga Mateshko, and playing with Eugene Hütz at Joe’s Pub that crazy night.

Hütz not only brought him into Gogol Bordello and opened up his musical taste—by introducing him to Jimi Hendrix, Tom Waits, the Clash, and Iggy Pop—but also “increased the boiling temperature in my kettle,” says Ryabtsev, who is fond of metaphors with heat, fire, and cooking. “We’re stirring an energetic kasha” is how he describes a live gig. “A club becomes a kettle in which we’re cooking along with the audience.”

Then, speaking of not only the song but the band, Hütz adds: “It would never be the same without him.”

Dmitry Kiper is a New York City writer working on short stories, poems, songs, and other curiosities. He is currently a fellow at the Writers' Institute at the City University of New York.

The Cancellation of Russia

People throughout the world are demonstrating solidarity with Ukraine by erasing the words “Russia” and “Russian,” a first step in the attempt to erase Russia itself. In Brighton Beach—Brooklyn’s “Little Odessa” populated mainly by Russian-speaking Jews who fled from Ukraine and other former Soviet republics—the community grocery store “Taste of Russia” has changed its name. Bobby and Elena Rakhman, the store’s owners, wanted to demonstrate support for Ukraine.

Late morning on East Houston, a trucker leans from his cab to look, and a young mother twists from her stroller to stare. The onlookers are studying Taxi: Journey Through My Windows 1977–1987, Joseph Rodriguez’s hard-to-miss new show along the chain link fences of First Street Green.