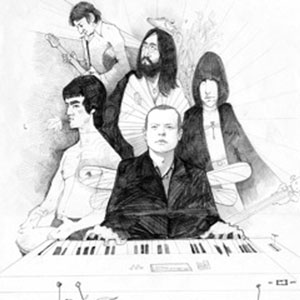 Over the last couple of years, I’ve spent more time than I probably should have poking around the music distribution site CD Baby. The secret behind what makes it so interesting is precisely what they would never admit: They take anything, however amateurish, however misguided—and however unrelated to consensus reality. This vanity press–like core is thinly veiled by the posting of daily editorial picks, which steer customers toward bland and normal sounds. But with a bit of patient slogging through the digital dreck—the site allows you to listen to portions of tracks from almost every album—I’ve been able to turn up all manner of wonderfulness: crazy outsider ramblings, private reissues of obscure sixties and seventies recordings, experimental music of various kinds. While I’ve found plenty of things I cherish, most aren’t likely to appeal to those lacking a taste for either intentional or unintentional weirdness. But a few of my finds do have the potential for an audience larger than a few weirdos. My favorite of these—it could be a hit, I tell you!—is Miam Monster Miam’s L’homme libellule.

The funny thing is, this 2007 CD is the kind of album that usually irritates me: It traffics in sixties and (mostly) seventies revivalism, à la Beck or Dungen (to name just two out of the hordes of clever appropriators currently out there). Yet I can’t help enjoying this bit of audio time-travel—both because it’s so well done, and because it manages to be more than the sum of its borrowed parts.

“Miam Monster Miam” is the pseudonym of a twenty-nine-year-old Belgian producer named Benjamin Schoos. L’homme libellule (“The Butterfly Man”) is actually Schoos’s fifth album, but the first as “Miam Monster Miam.” Despite his Flemish surname, Schoos is a francophone, and indeed his sixties and seventies influences are largely French. His center of gravity is the music of Serge Gainsbourg—like Gainsbourg, Schoos switches between spoken patter and a light tenor voice, and positions himself at a slightly ironic distance from the material at hand. Schoos’s stance as a slightly jaded and amused observer works because it is applied to styles that already had irony inherent in them. Thus, the tendencies that make so much current musical revivalism distasteful are avoided: Because Schoos is not mimicking musics that aimed for “sincerity” (e.g., he’s not pretending to be a born-again hippy waif), artificialness and self-consciousness are not an issue.

To the core influence of Gainsbourg, Schoos adds an array of other influences, all smoothly integrated. The first track, “La Mystérieuse Aventure,” the only instrumental, is brooding seventies prog—not bombastic, but atmospheric. Moreover, it’s French-style prog, rather than being in the Yes or ELP vein: It most reminds me of the obscure French group Flamen Dialis, but also is vaguely Magma-esque. Other tracks are overtly Gainsbourgian, such as “Insectorama en Mélodie Pop,” a duet with Sophie Galet, or “Saligotte Sally,” which sounds like an outtake from Gainsbourg’s Melody Nelson, while “Plutonium Baby” evokes the light-hearted, stylish new wave–isms of the Belgian band Honeymoon Killers, Family Fodder, or even Blondie. “The Takeshi ATT Cloning Love Machine” is seventies electro-pop, complete with cheap rhythm machine, while “Ninja Fury” has a seductive Euro-trash disco feel.

Tying all this together is a storyline—or at least a set of interconnected references—making for a seventies-style concept album of sorts. I’m afraid my French isn’t quite good enough to figure it all out, but the “story” involves, among other things, butterfly men and the women who collect them, robots, and, of course, l’amour. I can tell that the lyrics are witty, and occasionally drop in contemporary references, such as a line about a pornographic daydream involving Asia Argento, or a verse rhyming DSL and mielle (“honey). Somewhat jarringly—perhaps it would make more sense if I could follow the storyline closely—the album ends with the words “fuck you,” sampled from some naught ditty or other. This is one of the few samples throughout—and the only bit of English.

Schoos composed all but one track on L’homme libellule, but the excellent arrangements are by Martin Petersen, who also produced the album (despite the fact that Schoos himself is a producer). The music is performed by a presumably ad hoc band, the Love Drones, and is scored for piano, organ, synthesizers (including mellotron—or at least a mellotron patch), guitars, bass, drums, and trumpet.

While Schoos seems to have some small renown in the French-speaking world, as far as I know L’homme libellule has gone totally unnoticed in this country. That’s a shame, I think. Anyone who likes Gainsbourg or various other types of sophisticated and stylish Euro pop should give it a try.

A Few Paper Clips and A Couple Million Years

Feeding on caterpillars, beetles, spiders, and spider eggs, the blackpoll warbler will double its body weight to fly 20,000 kilometers from its summer habitat of the Canadian boreal forests nonstop overwater to winter in the Amazon. Challenging our imaginations, this twelve-grams-of-feathers has the longest overwater flight known of any songbird.