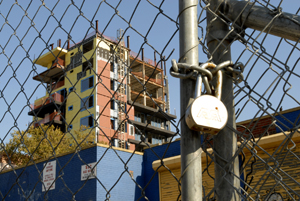 I visited Phil DePaolo to talk about development. Part of me wondered if Phil didn’t feel like a broken record. He’s been involved in virtually every development fight in from the People’s Firehouse to the waterfront re-zoning.

He and his wife live in a single-family home set back and barely visible from the street near the Bedford L stop. We sat down in the living room, surrounded by kids’ toys. The shades were pulled. In the dimly lit room, Phil leaned back, shorts and a New Orleans memorial shirt loose over his protruding middle, and we talked about development.

I’d asked him about the increasing number of half-completed construction projects and vacant lots that seemed to be breeding in Greenpoint and Williamsburg. Directly across the street from his place there’s a big hole between two four-story homes where another building once stood.

“There used to be people paying $600 for two-bedroom apartments in that building. The new people bought it, knocked it down and planned on building a hundred-foot tower there. Of course, we’re zoned R6B which basically means they can’t go over fifty feet. Apparently not making a million dollars in profit on each unit meant it was better to just leave it empty, so, there it is.”

Planner’s Blight, as Phil defines it, is when speculative development is allowed to spiral out of control because city officials zone without a policy for responsible growth. Lack of foresight, poor regulation, illegal work activity, and other reasons are leaving an increased number of half-finished work sites and empty lots throughout North Brooklyn, the wake of the land rush following Williamsburg-Greenpoint re-zoning in 2004. The worst example of this is the now-infamous “Finger Building.”

The Finger Building at 144 North 8th Street has been the symbolic centerpiece of neighborhood development in the wake of re-zoning. So-nicknamed because of the physical gesture it resembles poking up above the rest of the neighborhood, the building marked the beginning of changes to the area that have continued with waterfront towers, soaring condos along McCarren Park, and ads on Craigslist for $4,750 luxury penthouses in Greenpoint.

Phil and I talked about the day the first crane arrived, towering over the neighborhood at two-hundred feet.

“I would point to the crane and tell people: that building’s going to be fifty feet taller than that. I think that’s when people finally realized what was going on and what was at stake.” Phil recalled how surprised the developer of the Finger Building, Mendel Brach, was with public reaction to his luxury condos at the unveiling. Phil and other local activists immediately began working to try and reduce the size.

But why be critical of development? Why has it become something that many, like Phil and myself, cringe at? Neighborhoods in New York are all always changing and always have been. Whether it’s the transition from farms to factories, poor to rich, or one immigrant population supplanted by another, New York City, as a physical reality, is constantly in flux. The conversation that we were having has probably been happening since the Iroquois watched those first colonial ships roll into the harbor. The issue extends itself in two ways: how it’s happening in an immediate context, and how it progresses over time.

The Finger Building is an “immediate context” situation. The city re-zoned the Willamsburg and Greenpoint waterfront under the premise of converting underused industrial space along the waterfront into open, commercially viable property. Ultimately that will mean over a dozen towers looming hundreds of feet over the neighborhood along the water. Just prior to the city’s adoption of this re-zoning plan, developers scrambled to lay literal foundations for projects that would be banned in the soon-to-be “down zoned” areas re-zoned to keep new building near the same height as pre-existing structures. These “vested” properties tended to be high-end and far larger than those surrounding them. The monstrous condos along McCarren Park, as well as the Finger Building, avoided re-zoning constraints in just this fashion.

The Finger Building has become a locus for all that is wrong with development in New York City. Under a stop-work order for over a year now, the property has over ninety complaints and twenty violations logged against it on the Department of Building’s website. The New York Times has covered it. Bloggers, activists and local media alike have kept regular tabs on the project’s mishaps, from drilling into the subway walls that run below it, to the legal battle it lost against its neighbor that first brought the project down six stories from its original 16-story, 220-foot height.

Phil recalled once getting a phone call from a neighbor on North 8th. They were suspicious that work was going on at the site despite it being at night and on a weekend: “I called over to the firehouse to see if they could investigate. They could hear people behind the gate but no one answered. Finally, they sent someone up in the cherry picker. Sure enough, there were a bunch of guys in there, arch welding on a Sunday night.”

Brach is no stranger to controversy; many of his other developments have come under fire for poor construction, flagrant code violations and illegal building practices. Still, it is this property that has captured the imagination and, as Phil pointed out, has become a colloquium for how not to develop a property in a community. Still, it is just one of many structures creating the pall of Planner’s Blight across North Brooklyn.

In Greenpoint, the building at 308 Eckford Street has been issued a stop work order. The dormant, hollow concrete shell stands stories above its neighbors, visible from blocks and blocks away. Coming up McGuiness Boulevard, its dominating façade feels like it would be more fitting in the post-Soviet landscape than in Brooklyn. Construction permits on the plywood fence date the projects start to 2004 and its current permits are set to expire in January 2008. Around the exposed concrete block and rusting steel sit family homes, most neatly tucked up against one another at three stories. When I visited the property recently, people were sitting on porches, conversing in Polish. A young girl came over to tell me how her daddy worked on the type of scaffolding that has recently been installed.

At the corner of Withers Street and Union Avenue a massive empty lot has been left dormant since demolition began there nearly two years ago. Further into the heart of the neighborhood, at Union and Ainslie, a three-story skeleton is rusting away. What construction permit could be found indicated a start date of 4/14/04. Obscured by graffiti, the best I could make out as to when the project was supposed to be completed was also in 2004.

There are more of these, all over the neighborhood, with the Finger Building standing among them as par exemplar. Lawsuits and city violations have left the status of that project in limbo. Phil is part of a group of community activists that are trying to get the entire project reduced in size or, better yet, shut down entirely. A hearing with the city’s Board of Standards and Appeals is set to determine the fate of the site on November 20th. The board, which primarily handles zoning variances and special building permits, has the power to force the building to halt at its current height or actually be reduced.

“We want the city to send a message to current and future developers,” Phil said, explaining the potential impact of the BSA’s decision. “When someone breaks the law, they should be punished. Considering the sort of development that will be going on in and as part of the Atlantic Yards debacle, it’s important that the BSA does the right thing and makes development accountable to the community.”

The question of responsible development is bigger than just one poorly conceived and constructed luxury condo complex. As Phil and I talked, we spent a lot of time bemoaning the quality and character of the New Williamsburg. Communities are as subject to transformation over time as their skyline or the names on the shops along their streets.

Case in point: “The Edge,” the 40-story waterfront development project that boasts “1,000 residential units which will be built over 60,000 square feet of retail space and parking for over 1,000 cars.” It has been reported that a Barney’s and an Apple Store will be among the building’s first commercial occupants. The neighborhood that Phil—a New York born-and-bred guy who grew up in the South Bronx—has come to love and call his home is ceasing to be. Even in the four short years that I’ve called Williamsburg and Greenpoint home, things have changed rapidly. The charm and allure that brought so much focus on this neighborhood in the first place seems to have faded and waned. Old timers and disaffected hipsters agree: the place ain’t what it used to be.

“What’s happening when a cup of coffee costs over $2 at the local shop?” Phil asked. “I went to get an egg sandwich up the street this morning. Every once in a while I get a craving. It cost me almost $5. That same shop, under the previous owner, charged $1.50. Things are changing in a way that the core of the community is disappearing.”

As I was about to leave, Phil admitted that he and his wife had been considering leaving Williamsburg.

“People tell me: ‘now’s the time to sell you house. You’ll make a fortune.’ But we didn’t buy this house to sell it. We bought it to live in it,” Phil said. But Planner’s Blight has scarred the community’s physical landscape while luxury condos and their tenants disrupt its social fabric. So Phil wondered aloud, “With so much of what we have come to love about Williamsburg disappearing, is this neighborhood going to be a place we want to live in?”

Colby Hamilton is a freelance writer living in Greenpoint.