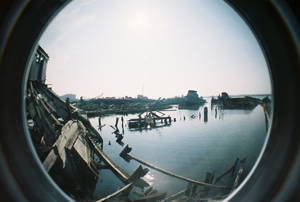 I walked through a split in the reeds. The narrow beaten path was strewn with flattened plastic bottles, brown and green shards of glass, and withered shopping bags half-submerged in the dirt or impaled by a desiccated reed.

When I emerged, before me was a panorama of decay: a row of ruined tugboats run aground on the shore of the Arthur Kill, some leaning toward others as if in a drunken, never-completed grope for support. Their raised wooden cabins, though paintless and bleached by years of neglect, still jutted proudly above moth-eaten prows. Their failed hulls now freely admitted water.

The Arthur Kill is the tidal strait that separates Staten Island from New Jersey; after crossing the Atlantic, container ships slog through it to land at Port Newark. Until 2001, thousands of tons of garbage were hauled through daily to the infamous Fresh Kills landfill, the largest in the United States, whose last deposits were wreckage from the World Trade Center attacks.

Hundreds of vessels—carfloats, ferries, tugs, some more than 80 years old—are mired in the ship graveyard in Staten Island’s Rossville neighborhood, where Donjon Iron and Metal Inc. has run a salvage operation since 1967. I had come with two friends, Sarah and David, to get away from Manhattan’s order and municipal sheen; I had come to see collapse. 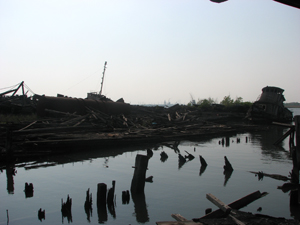 We were standing at the shore when we heard a voice call out to us. I was sure it was someone telling us we were not supposed to be there; our presence felt unauthorized, possibly illicit. The voice called again and we saw a figure dressed all in black, on the other side of a narrow creek. “If you want to take better pictures, I can show you the way,” the voice yelled out—it was the voice of an adolescent boy. “Meet me back at the street.”

We tromped back through the reeds and the boy was waiting for us, hands in the pockets of his ratty once-was-black jacket, face half-obscured by his long light-brown hair, large eyes regarding us shyly. “This way,” he said. We followed him through the yard of a nearby house and along another packed-down ribbon of dirt hedged in by reeds and then out again: another tableau of ruin. There loomed the rusted pockmarked hulls of antique freighters and listing barges, wooden ships whose planks fanned away from each other. 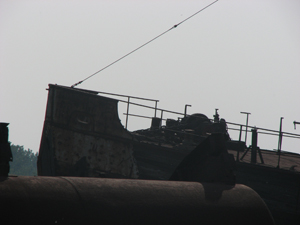 We introduced ourselves; our guide’s name was Vincent. He was 14 years old. “I come out here all the time,” he said. “My mom doesn’t like me to come out here, though. She says there’s a lot of asbestos. There was a landfill around here but they closed it down because it was causing too much cancer.”

He led us to a spot where the stern of a wide wooden boat met the mainland, and deftly pulled himself up through a narrow opening. We more tentatively and more clumsily followed. The deck was wide and covered with graying fragments of wall and roof. What remained of the roof above us sagged lazily toward the water. We edged toward the front, where Vincent was already trotting across a fallen board connecting this boat to the next—an accidental gangplank that bowed with his every step. Then a loud crash sounded behind me; David’s foot plunged through a weak stretch of floor. He caught himself before falling any farther.

“People don’t believe that this place really exists,” Vincent told us, coming back. “Sometimes people at school lend me their camera and I take pictures to prove it does.”

He led us back to land, through more reeds, over a stream, and to the edge of a boat so battered and diminished that only a skeletal hull remained. We hoisted ourselves up. Withered slabs of wood crisscrossed a set of solid-looking support beams. The rounded heads of hundreds of rusted nails—they looked like railroad spikes—poked through, as though they had been sprouting ever so gradually over the past few decades. 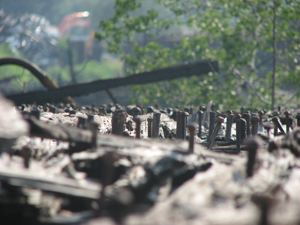 “Step here,” Vincent told us, pointing from a few paces ahead. “And step here, and step here. Don’t step there.” He pointed at a flimsy stretch below which, through the gaps, we could see the jagged oxidized ends of those oversized nails sticking disobediently in all directions.

We crossed and hopped down onto a small metal boat whose cabin was missing but whose instruments remained. Cracking glass tubes poked from the guts of some old device that had once likely been state of the art. Exposed gearteeth had fused into one another, and a chain had merged with its winch; they looked like fossils.

“I’ve never gone this way,” Vincent told us, bounding ahead toward a set of three hulking, blocky, burgundy-red masses of steel—antique warships, they seemed to me. And then he was gone.

I registered the splash before I realized he had disappeared and I seemed to hear the split-second groan of the wood giving way only after the splash. David was closest and he dropped to his knees and reached down through the hole and shouted Vincent’s name. Sarah and I searched the water below; we saw nails everywhere. Here was collapse.

But we heard Vincent say, “I’m okay,” as he emerged and treaded the brackish water. He swam out from under us and around, and we helped him aboard, as it were. He wiped from his face the grimy traces of the ship graveyard’s murk; he pushed on the pockets of his jacket and the filthy water spouted out.

“Are you okay?” we asked him, patting him on the back, our hearts slowing.

“Yeah,” he said. “I knew it was going to happen eventually.” 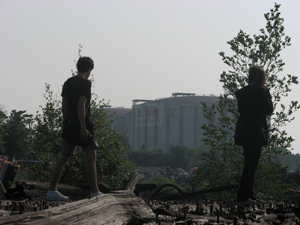 Clearly we were more shaken than he was. Undaunted, he led us back to Arthur Kill Road, once again patiently telling us where to step. At the bus stop we said our goodbyes, and then Vincent left us, squishing away in his soggy Chuck Taylors, his hands planted firmly in his pockets.

Later, on the ferry ride back to Manhattan, an oil tanker passed us in the distance. As it shrunk on the horizon, I could only see in the great expanse of steel—sea-blemished but still intact—a future scrap heap: the tantalizing promise of decay.

Alexander Cuadros is a writer and translator living in Brooklyn.

In her surreal new comedy You Never Touched the Dirt, the wealthy Lis have lived detached from the land that nurtures them while also paying exorbitant prices to enjoy its unspoiled splendor in a private lakeside community somewhere outside Shanghai. Zhu Yi’s play is a bonkers, tilted, and utterly delightful eclogue; naturally, experimental mainstay Ken Rus Schmoll directs this New York premiere that bows at Clubbed Thumb’s Summerworks starting June 3.

Made as the AIDS crisis in the United States was at its peak, the photostats—a series of fixed works with white serif text on black fields that are framed behind glass—reflect the contradictions inherent within human beings; a timeless social commentary on the difficult and ongoing work that lies ahead to create a more just world.