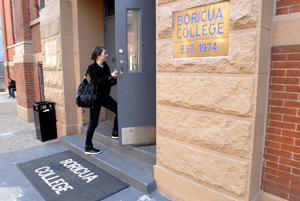 As a resident of Hoboken, New Jersey and dedicated Manhattan cultural tourist, I had always kept Brooklyn at arms length. Though vaguely aware of the borough’s cutting-edge artistic enclaves, I was never sophisticated enough to be too aware of them until recently. I admit that the relentless assault of bad tabloid press—skewering Brooklyn as the “murder capital of the world”—coupled with events like the Crown Heights riot, caused me to write off the entire county of Kings as a scary, dangerous place.

Until, that is, my first day as an adjunct English Professor at Boricua College. Stepping off the L train at Bedford for the first time, I beheld with wonder the cultural and artistic oz before me, in a blessedly human-scale package: cozy rows of homes, and a delicious 1970s time capsule aesthetic that included snatches of graffiti here, sneakers dangling from a telephone wire there.

Boricua, a nondescript college attended by mostly poor students of color, is located on the quiet, leafy block of North 6th between Bedford and Driggs. Founded in 1973, it was designed to give a second chance to victims of NYC’s decrepit, criminally under-funded education system, building a theme of Latino culture into its curriculum. Just opposite St. Ann’s church, the axis of college and church on this serene street feel part of a tiny, contemplative island of authenticity—just a few steps from the so-called epicenter of the hipster universe.

When your students come to you with a fierce hatred of reading, as mine did at Boricua, rather than inflict the same old skills and drills approach, a thousand times better way to arouse a passion for reading is to get their asses into a really cool bookstore! I took my students on a field trip to Spoonbill & Sugartown on Bedford Avenue. The power of being in a great bookstore is that unlike the sterile corporate chains, the humanity is slowed down to the point where the non-reader might experience an identity transference with the other people in the store. They might think: I could be part of the club of readers too.

The difference between walking the streets of the Village and Williamsburg, is that in Williamsburg even if you’re not “in,” (like me and my students) it feel like at least you have an outside shot at being invited to the party. My guess is that the humane values brought here by the early artist-settlers, fleeing the pretentious uber-art world of Manhattan, became concretized in the civic and social energy here. Facial expressions in Williamsburg don’t have the same get-the-fuck-outta-my-face-I’m-late-for-an-important-meeting scrim they do in Manhattan.

The end result is a glimpse of social possibility, a fecundity between the self and the stranger, a flirting peek at Buber’s elusive I & Thou, cheered on by the aesthetics of the streetscape, like the boxy complex at North 5th and Bedford that contains Spoonbill, Verb Café and Earwax.

Of course, it’s hard to articulate these concepts didactically to students. But I’ll tell you this much: walking the streets together, I could feel their souls surging to the same artistic-civic-social nirvana in the air in Williamsburg as mine was. There was a giddiness in our collective tone, a hopeful, coiled spring in our step as we glided down Bedford, the light in our eyes glowing—like the carbon rods in those old fashioned movie projectors—as we passed the video store Reel Life, or beheld the “Paris in the Twenties” vibe at Fabiane’s outdoor seating area, perhaps projecting ourselves into a starring role in a future film to be shot here, based on a story we’ll write, enjoying coffee and conversation with the date of our dreams.

In his book The Discipline of Hope, noted educator Herb Kohl argues that the key role of teachers today is to give students hope for a better future and world. Perhaps one not so hell-bent on the pursuit of money to the exclusion of love, friendship and art as is ours.

Art, of course, does the complete opposite. Art, according to education philosopher Maxine Greene (still a tiger at 90, and hosting regular salons in her Upper East Side apartment) has the power not only to name the social and political problems that need repairing, but can clear a space in the thickets and brambles (like gliding down Bedford) where we might, achieving a sense of agency, begin to act and move and speak in our own voices—alone, or in concert with others, as part of a social dance. Maxine, in fact, has been arguing for the centrality of art in Education for over 30 years, about as long as our public officials have been removing art—which they deem frivolous—from school curriculums to make room for a testing-based program designed to produce obedient workers for the global economy.

I never use the department-sanctioned textbook. Instead, I brought the joy of learning to my students at Boricua by utilizing the community we were situated in, fabulous Williamsburg, as curriculum. Our trips to Spoonbill included two readings (the first public literary readings ever for my students): one by a local novelist who wrote a peculiar love story that involved Siamese twins, and whose next, and even stranger book is a novel written in tattoos, on the actual body parts of a large group of people. She explained this to the audience, which included my spellbound students, suddenly aware that reading and writing don’t have to be boring.

The other reading we attended at Spoonbill, of Brooklyn Rail fiction writers, was on an especially cool class night of “art hopping”—beginning with the “Suffering & Smiles” exhibit at Supreme Trading. The show, a heartbreaking collection of photographs depicting victims of the U.S. Army campaign in Vietnam 40 years ago, innocent souls crippled and deformed by agent orange—alongside their bravely optimistic caregivers—was the first ever gallery opening for my students.

Not only was the photographer on hand to give a brief chat, but a high school student from Boston—who came up with the idea for the event as a way to raise awareness for victims of agent orange—was also there to say a few words. All this in the clarifying, wonderfully open space of the Supreme Trading garage.

And I was glad they learned, in their very first gallery opening, that art and fighting for social justice can go together. I can still picture them, gazing reverently at the photographs, taking notes, mingling nicely with the artistic elite of Williamsburg. And how exuberant, yet grounded, they were as we walked out into the crisp fall night, transformed, different now, bubbling comments along the theme we never thought going to an art gallery could be so amazing. Then it was onto Spoonbill, for the Rail fiction reading.

In his end of the semester reflection, one student wrote, “When our class visited the art galleries, I was very uncomfortable because that was not the environment I grew up in. Now I am opening up to take art in. My girlfriend and I are going to an art exhibit in two weeks.” Another said that “…this class made me want to seek out art experiences with my friends. It’s exciting to see the quality of art as it can open up new horizons.” 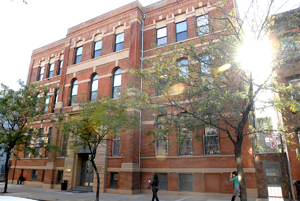 One of my Latina students still struggling with her English wrote, “I like very much we visited with class the art galleries right here in Williamsburg. Because personally, I like art. But sometimes I don’t understand some of it. But in these galleries, I understand a little bit the idea of the painting.”

The other great benefit of teaching a college English class in Williamsburg is I got to use the Rail quite frequently as curriculum. Phil, the friendly, avuncular security guard at Boricua, used to chuckle whenever he saw me trudging my big stack of Rails into school, freshly pillaged from Spoonbill or the community space walkway next to Verb. I always flipped Phil a copy of the Rail.

Rather than snooze over a McGraw Hill textbook, we read pointed cultural critiques in the Rail that included a blistering expose of America’s shallow fame culture, an article about homeless characters in the neighborhood that brought a hint of recognition from a student (hey, I know that guy!), a piece about Godard’s Two or Three Things I Know about Her—then playing at the Film Forum—which sparked virgin glimmers of desire to see a foreign film, and a review of Killer of Sheep, a seminal work in black cinema then playing at the IFC, which some of my students—inspired by the Rail piece—actually went to see. They came to class the next day singing the film’s praises.

My teaching experience in Williamsburg wouldn’t be complete without Thursday night beers at the Abbey with my colleague Robert Lewis. Robert, a science professor at Boricua, and long time resident of Williamsburg, gave me lessons on the neighborhood’s rich history over 3 dollar mugs of Yeungling and free popcorn, in this wondrous cave of a bar with stained glass windows and flickering candles, that proudly proclaims “it ain’t church.” The classic bluesy-jazzy rhythms soothed me as much as the kitschy old films and sit-coms flickering on the televisions. In my ten years of teaching, that was hands down the best professional development I ever got.

One of the first things Robert taught me about Williamsburg, during our Abbey dialogues, was that it’s the site of the classic novel A Tree Grows in Brooklyn. A college also grows in Williamsburg. I call on artists, writers, and educational activists to join me in nurturing the growth of this “little college that could.” Because Boricua’s focus on “perceptual development” is especially geared toward art experience, a closer collaboration between the school and the arts community around it would help the college fulfill its historic mission. It would also give local artists a valuable connection to the community and an opportunity to give back.

Everybody wins, especially the students at Boricua.

John Bredin is an Adjunct English Professor at CUNY and Boricua College.