My Kid Could Paint That, dir. Amir Bar-Lev, now playing 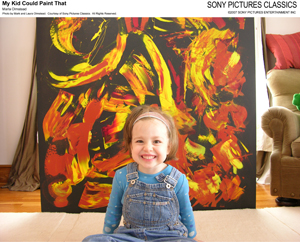 
Gone Baby Gone kicks off with a familiar trope—a little girl’s smiling face on posters screaming “Missing!”, anguished relatives, TV news cameras circling like hyenas converging on a wounded wildebeest. The power of these images is only amplified by how often we’ve seen this story before.

Yet from the start the movie signals that its story won’t be quite as familiar as we think, thanks to the documentary zest with which Ben Affleck, in his directorial debut, exploits the story’s Boston backdrop. We don’t know what’s happened to little Amanda McCready, but the tough hand that Fate has already dealt her family and her drug-and-alcohol-riddled Dorchester neighborhood doesn’t bode well for her future. 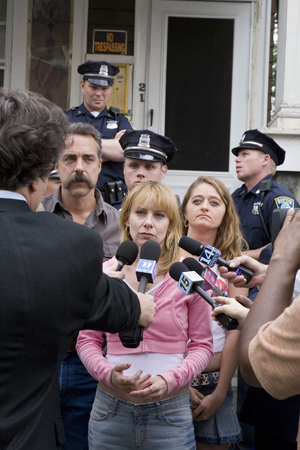 Based on a novel by Dennis Lehane, Gone Baby Gone has some plot points that strain credulity but are well within acceptable bounds for a thriller. It’s not profound, but it’s clever, which is a lot better than being stupid.

Casey Affleck (Ben’s younger brother) stars as a cocky little private investigator who’s hired by Amanda’s family. A wrong-side-of-the-tracks guy himself, he knows dealers, drunks, and other low-lifes who are willing to tell him things they wouldn’t tell the cops. Affleck gives his character just the right combination of steel and sentimentality, toughness and anxiety, and the best thing about the movie is watching this noir-ish not-quite-hero interact with a cast that includes many real-life residents of down-and-out Dorchester.

Some reviewers have complained that Ben Affleck went too far in exposing so many unpretty Dorchester denizens to our gaze. It’s reminiscent of the objections that used to raise about the photographs by Diane Arbus, whose subjects also were willing volunteers. What purports to be an argument for protecting the dignity of vulnerable, weird-looking people is perhaps more about protecting our own vulnerable sensibilities from their weirdness. These people may exist, in other words, but do we have to look at them? In Gone Baby Gone the answer is yes, because their presence underlines the harsh facts of life driving the dilemmas with which the main characters wrestle.

And to paraphrase Samuel Johnson, when a man is tired of looking at Dorchester, he is tired of looking at life. One of the film’s fine performances—and there are a lot of them—is by Jill Quigg, a local woman who makes her screen debut as Amanda’s mother’s best friend. Amy Ryan does a terrific job as the reckless mom, who’s no better than she should be (actually, quite a bit worse), but having the potty-mouthed Quigg by her side, decked out in tattoos and raccoon eyeliner, instantly doubles Ryan’s credibility. Should we feel bad that Quigg reportedly ended up in rehab after the movie crew moved on? Probably not; she’s hardly the first actor to need some post-production recovery.

By contrast, Morgan Freeman’s turn as a police captain in charge of the investigation seems to be phoned in from some other movie; he’d be right at home against a backdrop of bland Hollywood extras pretending to be Dorchester rummies. Unfortunately, his performance makes a central plot point seem unnecessarily ridiculous.

In most rescue-the-little-girl stories, those trying to save the child are by definition on the side of the angels, and those who seek to steal or harm children are evil incarnate. That’s why real-life missing girls get so much ink and air time; theirs are among the few stories that can still be straight-facedly presented as melodramas-cum-morality plays.

What Gone Baby Gone recognizes is that, much as we like to pretend “it’s all about the kids,” most of the time it isn’t. On the public stage and often even in the privacy of our homes, we cherish (or abuse) children as stand-ins for ourselves, symbols we use to express our need for love and community, our anger at the ways the world has disappointed us, our fears and hopes about the future. So while everyone in Gone Baby Gone claims to have Amanda’s best interests at heart, each of the characters is revealed to be deeply confused, even corrupted, by his or her own prejudices and needs.

That same theme emerges from Amir Bar-Lev’s documentary about Marla Olmstead, a four-year-old from Binghamton, New York. When a local art dealer began selling her paintings and calling her a prodigy Picasso, little Marla was grabbed hold of by, not some nefarious pedophile, but the international media. My Kid Could Paint That shows how news outlets around the world seized on the story of a toddler whose bright, smeary canvases were fetching six-figure prices—thanks mostly to all the publicity—and then, when that version of the story had outlived its freshness, turned on her as a fraud.

The greatness of Olmstead’s paintings is debatable, but they certainly do not look like child’s play. What made her story such a sensation, however, was not the quality of her pictures, but what they said about the art world. As New York Times art critic Michael Kimmelman observes in the movie, Olmstead’s paintings simultaneously seemed to reveal that “abstract art and modern art in general are a kind of racket, a put-on,” and offer an “innocent” version of abstraction with “no cynicism, no irony, no sarcasm, none of that stuff that goes along with modern art,” paintings whose only statement is, “I’m a happy girl who loves painting.” Take that, Damien Hirst!

Bar-Lev was deep into his documentary project when 60 Minutes ran a segment questioning whether Marla’s paintings were in fact done in part or in whole by her factory-manager father, himself an amateur artist. That left Bar-Lev and Marla’s parents scrambling to come up with on-camera proof that Marla really does make the paintings all by herself. Under this pressure, the documentary morphs into a film about the blowback from Marla’s celebrity and Bar-Lev’s well-founded worries about his own complicity in what is happening to her and her family.

Like Amanda McCready, Marla Olmstead is a mediagenic cutie on whom the adults around her can’t wait to impress their own meaning. Dealers and collectors see her as investment-grade innocence they can sell or buy by the piece. To journalists she’s a series of prefab stories: infant prodigy, proof of art-world wackiness, tragic victim of exploitation. Her parents, having once drunk at the fame fountain, keep courting the renown they claim Marla is entitled to, insisting it’s for her own good. Bar-Lev and we the audience are in on it, too, but how can we turn away? At its most disturbing, My Kid Could Paint That suggests how much damage can be inflicted on a child with the best of intentions.

Elaine Reichek scavenges among sources from literature, history, mythology, and art, fabricating images and texts she transforms into textiles. Trained as a painter by avant-garde, intellectually rigorous icons, notably Ad Reinhardt, her career has been defined by her strategic use of the textile medium—a feminist, postmodern strategy.