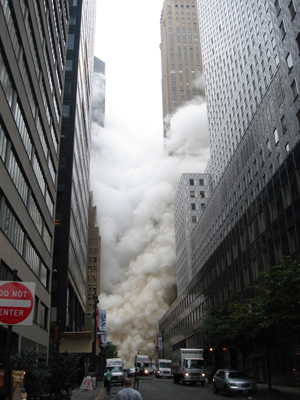 My mother called to tell me that today was her birthday.

She wasn’t, of course. In the morning I went to the pool where I go when I go to swim laps. The pool is high up and has a view of the city. After I swam, I went to see a movie. I could not go to work because a steam pipe had broken—exploded—outside the building, the high rise, that has my office in it. A violent plume had obstructed the sky, ruddy and thick, and there were shards flying everywhere, of masonry and glass. People were screaming, believing the worst.

I wished just a little that I had been there.

It was all of it cordoned: papers, files, information irretrievable, the windows blown. The news showed the street, laid bare save for rubble.

Outside the theatre, the rain fell hard. The roof had a leak. Drops, great drops, then showers of water poured onto the plastic—hefty, black—that someone had laid on the topmost seats. I had just come from a country, from visiting a country, where things like this happened. Water that fell rolled all down the floor. The handful of people watching the movie in the middle of the day in a city where things such as this were not prone to happen did not appear troubled. They moved to drier chairs. The star of the movie, a world-famous actress, was dying and dying, and then she died.

I went home and baked treats to mail off to my sons via overnight service, throwing away all the ones I had burnt. There were many I had burnt.

I called my office voicemail.

My sister was not home. I left her a message, which might or might not have recorded, I thought.

The call came at work. I was not at my desk. This did not matter. I said they were wrong. The man to whom my mother had been married for so many years lay dying himself on his side of the bed, and he was quite hard of hearing. The housekeeper found her.

The telephone, the catering, the burial, bills. The carpet, the realtor asserted, had to go. The housekeeper left us the mess where it lay. It was I who placed the pills and the caplets and tissues and syrup and something else sticky into the bag—it was a big, dark bag—and then I wiped the surface down. The carpet was cream. It was all done correctly.

The corporate hotline did not have an update.

The boys sent a message from somebody’s gadget in digits and type.

I cleaned up the kitchen. The call was my sister. I said, “What’s new?”

Dawn Raffel's short story collection Further Adventures in the Restless Universe is just out from Dzanc Books. She is also the author of Carrying the Body, In the Year of Long Division, and The Secret Life of Objects, which is a memoir in vignettes. Her work has appeared in O, The Oprah Magazine, Conjunctions, Open City, The Mississippi Review Prize Anthology, The Anchor Book of New American Short Stories, Art & Letters, and numerous other periodicals and anthologies.

“It’s only normal to love your mother,” she tells him, “and there’s no reason to be afraid of committing incest.”

What My Mother And I Don’t Talk About: Fifteen Writers Break The Silence

Despite the centuries old and universal topic of the mother-child relationship, the dyad of all dyads, Michele Filgate’s anthology reminds us the subject never grows stale. Rather it is perfectly-flavored dressing atop the most flavorful edible garden.