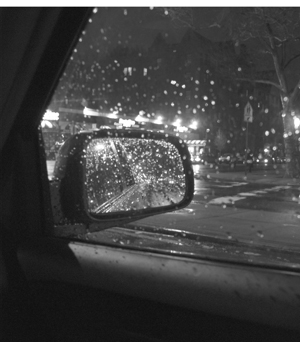 Not in search of cheer or drink or hail-well-met, the moon about to slide down into the city, they are drawn past the windowpanes of pubs all the way to the river itself. The river is not lit, which is a relief, and they hang over the railing beside trees and watch the moon catch on watery things.

A holiday story, he says, reading under the streetlight from a trashed Tribune. She swam to a little island in the middle of the river, says the husband. After they’d stripped her and beaten her. Then they taunted her from the shore, offering her their coats.

It was a different river, the wife says, looking at her son. She moves to a shielding position—he’s too big for thirteen, people think he’s older, his father thinks he’s older.

An American river, says her husband. One of those cemented along the sides.

Was there a helicopter involved? asks the son, and throws a stick over the railing to show he’s not really listening, not to worry.

A heron falls into the river after the stick, dropping from the black sky through all the city light into more black. They say Oh, my god! without words. The bird wings up out of the water with no stick or fish or boot in its beak, which is no real surprise, given the mid-city locale. It lands and preens a picturesque distance away.

What happened to the woman? The boy can’t resist.

Shshshsh, says the wife but the husband says, There was snow all over the island but she walked across it after it got dark.

The woman would lie down and curl up, says the son. Hold her knees to her chest.

Or else stay low and crawl.

The heron dries its shiny beak in the electric light.

They are used to the bird by now, surely herons are always landing in in the last hours of the year. The wife turns back to the river. She was menopausal, she doesn’t say, she burned a path through the snow with her hot-flashing skin. What she says is Tibetan monks can walk through snow up to their necks and not freeze.

She watches her son’s stick go its merry way, collecting foil and cup and fishing line. He throws another one, underhand, and it goes farther than the father’s.

The bird dives again then lifts into view near the railing—a very big bird, judging from the wingspan or is that just what it seems, so close and sudden? It dissolves back into the dark band along the banks. Could’ve been bunraku, says the husband. A Javanese shadow
puppet.

Almost a nod from the wife. The Chinese considered them a symbol of the righteous, because they thought they flew above the clouds.

With the bird gone, they hear the traffic again behind them, the possibility of a bus.

Actually she waded across and walked in the nude, in the dark, against the traffic on the Interstate, says the husband, crumpling the newsprint. She pounded on the door of the first house she came to. Christmas lights blazing right up next to the busy highway, headlights on her buttocks.

You’re exaggerating, says the wife. It didn’t say that.

They move to the curb and wait for the long light to start chirping Look Left. The son turns back to the railing, as if what they have seen will repeat itself. The light takes so long he turns around again and crosses with them.

The son says, Well, did they let her in?

No, but somebody else finally did, a few doors down. The first house had a party going and couldn’t hear her.

Or so they said, said the wife.

It would be hard to open the door to a cold naked frightened woman, says the husband.

Why? asks the wife.

Somebody did, the son says in the ensuing silence. Blocks pass before the cold of the hour begins to slow them.

It’s just a story, says the wife when they turn into a square. Nobody would really do that to anybody.

Let’s talk about something else. What about standing at the top of the bridge? Where we can really see, she says.

Brits sit in overcoats in the cold, drinking beer along the water’s edge. Few of them look up when the first fireworks explode, where the smoke and theirs join, where “Pretty Girls” still blinks from the highest building.

The bird isn’t caught in the bursts of light, dazzled and turned and taken down, as far as they can see. The wife stomps her feet to get warmer and says the night’s over but the moon still hangs there so brightly they all think it’s warmer. They mill with the others.

Go on—shoot, says the drunken ten-year-old beside them, pointing his arm, taking aim at that moon.

That’s the whole thing, says another. They did and just look at her now.

They didn’t, did they? says the son.

Terese Svoboda's Trailer Girl and Other Stories will be out in paperback this fall. Her fifth novel, Pirate Talk or Mermelade, will be published in 2010.

Has anyone ever (this is a rhetorical question) thought/seen/activated the observer this way? Sunshine at midnight indeed! From and in every crevice in every stone, creatures are peeping out or lying down: butterflies all over and everywhere. Nothing feels left out and everything feels included.

Born in New Orleans to a Baptist minister and his wife, this woman has been singing professionally since the age of 14. Now living in L.A. and well into a pregnancy, she gets a call one night from a producer friend who is desperately in need of a backup singer for a recording session with some visiting English musicians. At first, she refuses—it’s almost midnight, she’s pregnant, and already in bed—but at last she agrees and a car is dispatched to pick her up.