Alan B. Krueger, What Makes A Terrorist: Economics and the Roots of Modern Terrorism (Princeton University Press, 2007) 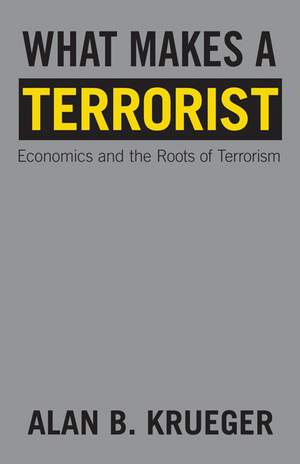 This discrepancy unnerves Alan Krueger, the Princeton University economist who, in his groundbreaking new book, What Makes a Terrorist, enlists the “dismal science” to tackle the despicable one. Provocative, dispassionate and accessible, Krueger’s book is a breath of fresh air in the stifling climate of empty speculation that dominates the terror dialogue in post-9/11 America.

In What Makes a Terrorist, the titular question is composed of three equally rich queries: Who becomes a terrorist, where do they come from, and how much do they affect us? The data reveals surprising answers for each. His answer, in short, is that terrorists are generally well-educated, well-off individuals, who tend to come from and strike at politically repressive countries, and whose actions affect us only as much as we allow them to.

Krueger’s first point comes as perhaps the biggest surprise. After all, the conventional wisdom after the September 11 attacks held that terrorism was rooted in poverty and lack of education. While these social ills may play some role in stoking popular support for Al Qaeda, and may fuel its grievances with the West, Krueger draws on existing literature to show that participants in terrorism are overwhelmingly likely to be at least middle class and are often highly educated. Recognizing terrorism as a form of political expression is the key to understanding why this is the case. In this sense, Osama Bin Laden exists on a spectrum that includes campus Maoists, anti-abortion protesters, and the average American voter. In all cases, the correlation between increasing wealth and education and increasing conviction of opinion is well proven. The poor and undereducated are less likely to express themselves politically, whether by voting, protesting, or mixing a molotov cocktail. In Krueger’s analysis, this may be because those getting the socioeconomic short end of the stick tend not to believe in the merits of the system enough to try to influence it—or overthrow it.

The middle section of Krueger’s book argues, among other things, that most terrorism looks nothing at all like the international suicide plots we are accustomed to fearing. Worldwide, from 1982 to 2003, 88% of terrorist attacks took place in the perpetrator’s country of origin, and just 5% were suicide bombings. Terror is, by and large, a local phenomenon, victimizing citizens of the perpetrator’s home country, or foreigners unlucky enough to be there. “A typical international terrorist attack is thus not like those on September 11, when people from foreign countries came to the United States to commit an attack,” Krueger writes. “A more typical scenario is the kidnapping and murder in Pakistan of the Wall Street Journal reporter Daniel Pearl, by a group believed to be affiliated with Al Qaeda.” Or it is like the London transit bombings of 2005, or the bombing of Oklahoma’s Alfred P. Murrah Federal Building in 1995. This has profound implications for strategies of defusing terrorism within the United States and puts the current hysteria over border security in some perspective.

Krueger is least certain about the third point, concerning how much terrorism affects us. There is no question, in What Makes a Terrorist, that terrorism as we know it today is not the existential threat our political leaders make it out to be. But Krueger walks the line, peering over at both sides of the argument: acts of terrorism either have a lasting impact on the economy and election outcomes, or they have a limited one. He comes down on the latter, arguing that in most cases, terrorism affects us only as much as we let it. Outside the immediate zone of impact, terrorist acts do the most damage by producing uncertainty in the political sphere and in the marketplace. Krueger holds the news media as particularly responsible for spreading this damage through their recklessly sensationalized reporting on terrorism. He finds early news reports on terror attacks so error laden that he recommends ignoring them altogether.

The climate of uncertainty created by terrorism, and spread through the media and by certain political leaders, results in far-reaching, but self-inflicted damage. This damage can take the form of irrational market slowdowns. Or, Krueger writes, overreactions by the government: “One of the bigger risks for the economy…is that the government could crack down on immigration. For economies like those of the United States and the United Kingdom, immigration—the energy and ingenuity of immigrants—is an important source of economic growth.” That type of overreaction certainly did occur, for example, through student visa restrictions that have shrunk America’s global lead in higher education.

In the course of his analysis, Krueger does toss off some dangerous ideas— for example, should we tailor our educational system to cut out subject areas and educational materials that do not promote tolerance and peaceful political expression over extremism and political violence? Should the FCC fine news outlets that repeatedly make mistakes in their coverage of terrorism? Such ideas are par for the course in a provocative book that more often than not has the facts on its side.

In the end, Krueger’s analysis is more descriptive than predictive. It’s a grounding read that goes a long way towards demystifying terrorism, but we should be careful to understand the limits of rational investigation on this topic. In What Makes a Terrorist, Krueger cites Robert McNamara’s lesson, from the documentary The Fog of War, about the importance of knowing your enemy. Krueger would have been wise to mention another rule from the film: rationality will not save us. McNamara’s mastery of statistical analysis may have helped him run the Vietnam War more efficiently, but it couldn’t convince him until decades later that the war was a dangerous, lost cause.

Ryan Hagen is a writer living in Brooklyn. His writing has also appeared in The New York Moon.

In her debut US solo show, Re-Education at SculptureCenter, Berlin-based artist Henrike Naumann explores the power of design to disseminate specific messages and align with larger ideologies.

Higher Education and the Remaking of the Working Class

During its heyday following World War II, a college education was a means to lift parts of the working class into a newly-defined middle class, no longer based on the occupations of the past but instead conceived in terms of education, home ownership, well-paid employment, and household consumption.