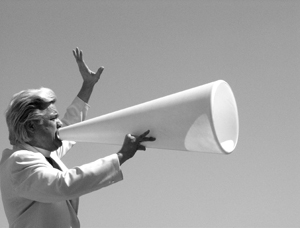 Rob VanAlkemade is the director of What Would Jesus Buy?, a film about performance artist/activist Reverend Billy and the Church of Stop Shopping that is produced by Morgan Spurlock of Super Size Me! fame. The message of What Would Jesus Buy is clear as the blond shock of hair on the top of the Reverend’s head—time to take a step back from consumption at a time of year when buying is the primary activity. In fact, the very notion of what the Christmas season has become is endemic of a huge destructive force in modern American society—we have become a nation of debtors who increasingly find hollow status and solace in an ever-growing array of items. The Rail’s Williams Cole talked to VanAlkemade about the challenges of making such a film and how to take a step back from consumption this holiday season.

Williams Cole (Rail): In a way, this film is taking on the essence of current American Capitalism—that being increased consumption along with increased debt. But don’t you feel this is an almost insurmountable aspect of our culture right now?

Rob VanAlkemade: No, it’s not insurmountable, even if consumption has become intertwined with notions of happiness, belonging and even patriotism. The American Dream is a great notion that’s been co-opted and marketed back to us as something shiny and new we can buy on credit. I don’t think that critiquing over-shopping and over-consumption in is a very bold move really, just a rational one. And I don’t feel that it’s at all quixotic of us to aim for a healthy re-prioritizing in our culture and in our lives. I hope we take on the essence of American Capitalism in the film but I think we also invite personal reflection on issues that often seem too big to tackle. And the reflection is the beginning of the cure, generating questions like: “Is this what my holidays need to be like? Am I looking for happiness by shopping? What else could I be doing with my money, my time, my loved ones and my life? If I scale back on my consumption how much could I help someone in serious need this Christmas, Kwanzaa, Hanukkah, Festivus?” I suspect that asking some basic questions could challenge the drawbacks of uninhibited consumer capitalism…at least enough to remind people that shopping should probably not actually be like a religion.

Rail: But people line up in front of stores for days and then crush through the doors with what seems like maddening passion. Isn’t the strain of this in American society almost too much to contend with? Where’s the solace in working against this?

RV: Even when we shot an interview with the chair of a group called Working Families for Wal-Mart, for example, or shot an invasion at the Mall of America by 100 activist gospel singers in red white and blue robes who were then escorted out by the entire local police force, it was never quite like being in “enemy territory.” I think we found occasional solace all the way through this production by realizing that we were not really working against any absolute evils, but mainly trying to bring some relative clarity, and often some much needed fun, to the front lines of rampant consumerism. Many of the folks we spoke to while camped out in those long frozen lines waiting for the arguable thrill of bursting into a big box store at 4 a.m. were mainly there to spend some time with a (mutually shopping obsessed) family member. So some common ground was found on many levels, all across the country.

Rail: Filmmakers are taught these days to fear a litany of obstacles regarding showing logos, brands, advertising—even though they are part of the aesthetics of the everyday life. Does your film hope to counterbalance this tyranny of copyright?

RV: It’s certainly a strange place we’ve arrived at in the arts when filmmakers, newscasters, journalists, authors, painters and so on, are clearly pressured into modifying their visions or even their most basic storylines based on practical restrictions imposed by modern models of sales, exhibition and distribution in a crushingly homogeneous and monopolistic environment. We had a very lucky combination of folks on our crew keeping us focused on the work and confident of our end game. Morgan Spurlock is relentless enough to defend and promote a vision that he knows is dangerous, funny, important, and ultimately, we suspect, very marketable. And we had a crew of gifted artists who were willing to work harder than they’d ever worked to make something they believed in—by which I mean Reverend Billy, church director Savitri Durkee and the amazing Stop Shopping Gospel Choir, all of whom inspired us regularly to seek the Odd in God, to Be Strange and Change, and to Stop Shopping…all of which are highly applicable to the artistic process.

Rail: Do you think there is a viable movement against the branding of public space and the hegemony of advertising in every realm of life? If so, how is this manifested?

RV: I hope that the movement to reign in advertising is getting more viable all the time, albeit slowly. In the film, we point out that in some countries it’s illegal to advertise to children under twelve, but that in we spend fifteen billion dollars per year marketing to our kids. And it’s getting trickier all the time as advertising and entertainment further merge. But some groups such as the Center for Commercial Free Childhood have pressured some regulation on advertisers and aren’t slowing down any time soon. But as far as the branding of public space, at the moment I think we seem to be plenty screwed in terms of preventing it.

Rail: One scene of the film takes place in that very Holy Grail of Copyright—, a corporation that is known for its relentless protection of its brand. Was it a conscious decision to go directly to the Mouse Beast?

RV: The decision to face the Devil Mickey was a decision made by the Reverend Billy in his youth. At that time, glaring visions of profound repression attempted to crush his spirit into a life of quiet conformity. These visions took on many forms including those of George Washington, as seen gently smirking on the dollar bill; Bill’s own frowning father, a stern conservative banker; and most often, and most chillingly, the ultimate father logo, Mickey Fucking Mouse. So, yes, it was conscious. And if Disney wants to take us on over the exploitation of their Mouse ears or the particular Disney font they use, we would be glad to open that conversation up to include issues such as pervasive world-wide sweatshop labor, union busting, outsourcing, and suffocating tackiness.

Rail: So, what, ideally, should people take from this movie as they do their Christmas shopping?

RV: Well, an incredibly diverse audience has responded strongly to the film as we’ve toured the festival circuit and taken some roads beyond it. I’ve spoken with or heard from teenagers who are earnestly thinking twice about their habits and priorities after seeing the film, yet were thoroughly amused and entertained along the way. I’ve seen conservative, liberal and mainline Evangelical Christians laughing to the point of exhaustion, and have had offers of support from all across the religious spectrum. And I’ve been told by self-proclaimed “raving atheists” that the message came through loud and clear without any heavy-handed theology.

So, as the Reverend says, “we are all sinners,” it’s complicated. We don’t have all the answers, but we do have the questions. And when we step away from the product, something mysterious happens. Changelujah!