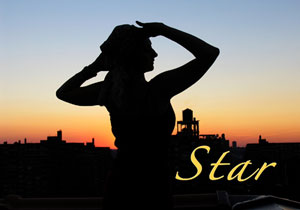 Life as an artist in New York City is rough. Dreams don’t always pan out and realities cause disillusionment. You come, you shine, you’re silenced. It happens all too often.

Choreographer Tenille Lambert, a newcomer to New York City herself and founder of The Ugly Company, handled this somewhat depressing premise with wit, tenacity and charm in her work Star, performed at Merce Cunningham Studios on a double bill with Fuzion Dance Artists in October. She also brought a much-needed sense of comedy to the subject.

Star wove the stories of three artists, an opera singer, an actor and a spoken word poet, with movement sequences that examined their experiences or stood alone as a sort of dance short.

A filmed interview with Takenya Quann, the spoken word poet, was projected on a screen on the back wall. She talked about her father not making as a musician in Maryland, and how she is going to go for the life of an artist and try rhyming. ”I have faith in myself,” she said. Simultaneously a dancer, in a hoodie, sunglasses and black stretch pants walks with a cocky stagger onto the stage. Her body is stiff and her hips move low to the ground, as she slyly maneuvers odd contortions to a sound composition with scratching.

This scenario played out with the other interviews in varied ways. The set-up sounds simple, and it was along with the all too basic movement vocabulary of lunges, runs and pinwheel arms. But Lambert’s composition of space, timing and theatricality helped make up for this.

The piece moved forward fluidly as dancers walked in and out of the stage area, moved in and around each other with such precision and casualness that the whole piece felt like a series of waves.

In one short, a microphone played the character of confidence, as it was seamlessly passed from person to person moving around the space. Those scared to speak into it moved on, those with stamina spoke and were then taken down a notch with stares from the others.

Another scene cunningly embodied the Darwinian theory. Three dancers set forth in a hula hooping contest, the winner stayed on as the losers were breathlessly replaced by other performers. The rhythm never let up and neither did the insight and confession of disillusionment by those artists interviewed.

The ending, however, was too obvious and overdone. Voice-overs escalated to upbeat music and the dancers walked forward beside each other, à la Chorus Line, removed their tops and looked up to the sky.

Optimism is of course always welcome, but uncertainty was the strength of this piece. Here’s hoping, however, that Lambert makes more work in New York City, and doesn’t become too disillusioned herself.

Jeff Koons. Shine is Koons’s most recent exhibition at the Palazzo Strozzi in Florence. This extensive exhibition features over 30 of the artist’s most lionized and varied works spanning from the 1970s until the present.

Daniel Johnston: I Live My Broken Dreams opened September 11, two years to the day of his passing. The prolific, enigmatic singer-songwriter and artist, famed for his self-released music cassettes and comic-book drawings, would have turned 60 this year.