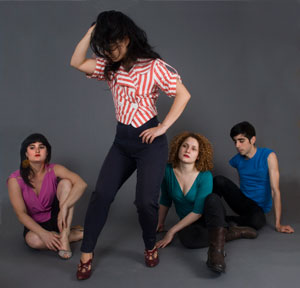 A single tear streamed down Sam Kim’s face as she slowly turned her head to the audience at the end of her newest choreographic work dumb dumb bunny performed at The Kitchen in October.

That lone tear was a shock to the system, but a welcome sign of emotion following a lengthy study, through dance and space, on disconnect, conformity and loss of self. Waves of sound opened the show as bright yellow lights illuminated in rows set on the side and back of the stage, lighting three large scaffolding and dancers scattered on it. The performers stood, legs split, heads down, arms reaching in a low V. Michael Helland, one of the featured dancers, slowly raised his arms and the group on the scaffolding, dressed in muted tones and tight pants, followed suit. Kim and two others walked down from the audience stairs in zombie-like fashion, arms lowering in opposition to those on stage. Eventually, the groups met up, flapping like birds and this thriller-like scenario soon morphed into club mania.

Hip-hop and house music, masterfully mixed by Stephen Cooper, drove the energy of most of the piece and launched the work into a high energy frenzy. Dancers moved in and out of poses, deconstructing common dance moves in such as manner that it was rewound, sped up and fresh. The strength of dumb dumb bunny was the forceful drive at the start, full of activity and sophisticated layering of movement. Some dancers performed solos of uncomfortable gyrations that, though totally controlled, looked not of their own body.

Such crazed scenes of people and movement everywhere was common throughout the evening, but the energy went unmatched for the rest of the piece. Much of the time, dancers stood like props, staring into space, reminding us of a bored scene at a bar.

But a bar scene brings us to one of Kim’s choreographic fortes—examining social and cultural contexts. I’ve seen her do it incredibly well in the past, and while this evening’s work was not as satisfying as those, she still artfully examined the role of the group and its effect on the individual. She had scenes where the groups united in subtle movement, standing, sitting or lying down, they would sometimes shake at the same time or turn their head the same direction.

But movement, concept, music and the incredible set by Mimi Lien did not counter the uneven pace of the evening and the mechanical nature of it. The bursts of energy were swallowed by too-long moments of silence, stillness and retreat. Yes, this seemed to be a work about disconnect, but this idea was pushed too far at yawning speed. At times I felt like the space between the audience and dancers was so great, that the obvious force used by the dancers was not easily felt. Kim’s choice to remove three rows of audience seating didn’t help either. Relationships between dancers was unclear as well, especially in duets set up with Liz Santoro and between some other dancers. Were they supposed to be dancing with each other, separate, connected? It was hard to say.

Fortunately I did sporadically find one relationship that made sense and added the human element I craved in a piece about people. Milka Djordjevich stood on the top ledge of the scaffolding with her back to the audience, facing Jodi Bender. They somehow made their way inevitably to the top of the scaffolding, only to collapse, convulse, trip and make their way down the scaffolding like some sort of zig-zagging robots. Their intent gaze at each other was the magnet. They connected with each other, and thus connected with the audience. They guided us to watch performer David Velasco emerge into shakes, as if he was being electrocuted. He was met by Kim on the dance floor below, looking up to him and mimicking his vibrations, then amplifying them.

Then came that lone tear, which sadly, after all the slow pacing, disconnect in character, intention and energy, seemed out of place and unrelateable for all the same reasons it was shocking. I wanted to feel her sadness, but I couldn’t.

It is radical to comprehend the importance of the simple act of naming something in front of another person. Yet, poetry engages in this particular kind of conversation all the time, naming what is, to make possible what might be.