Poet, novelist, activist, and essayist Ana Castillo had been addressing issues of racism, feminism, and Chicana identity with her award-winning writing (her first novel, The Mixquiahuala Letters, won the American Book Award in 1986) for nearly three decades since moving from Chicago to New Mexico in 2006. It wasn’t too long after the author relocated that she began to wonder what everyday life would be like for those who live on the other side of the Franklin Mountains, a beautiful range close to the border that Castillo stares at—from her kitchen window in a presumably nice home in a presumably affluent neighborhood. We can assume that Cabuche, the rough border town she intimately envisions in her seventh and latest novel The Guardians, manifests on the other side.

Rafa, a frequent illegal border crosser, father to the motherless Gabo, brother to the outspoken, 50-something virgin Regina, has disappeared on one of his trips from Mexico to the US. These border-crossing disappearances are a common occurrence in a town like Cabuche; they are more heartbreaking—and forgettable—for their frequency. 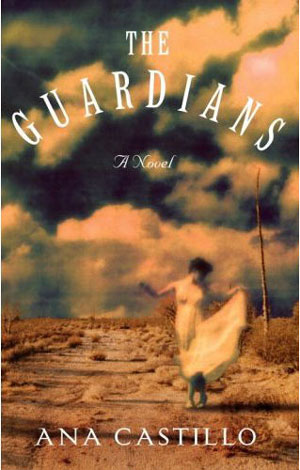 Four characters tell the story—Regina, Gabo, Miguel (Regina’s love interest), and Milton (Miguel’s grandfather). We hear from Tia Regina first, and Rafa, by the middle of the first chapter, is relegated to the background. Not necessarily a bad thing: the woman’s voice is funny, smart and unpretentious. One of the first of Regina’s stories to overshadow Rafa’s is a beautiful digression on the value of a dollar. By the time Regina has listed how far she and Gabo can stretch a dollar—purchase two avocados, fax a letter to the White House—the reader knows she is determined, stubborn, and deeply concerned for her nephew’s welfare.

Ximena, Gabo’s mother, was slain for her organs seven years ago by the smugglers (coyotes) she paid to get her across the border, and the death has traumatized Gabo. Though the boy is impossibly perfect, Castillo has managed to forge complexities behind Gabo’s faultless psyche. When Gabo innocently stumbles into a relationship with a gang member, he is drawn to the energy and excitement of the gang’s illicit world and the promise of a connection to the coyotes.

Rafa’s underdeveloped mystery is a distraction throughout the novel, and the sharp, dramatic scenes that wrap up his storyline jar what is essentially a subtle trajectory. Thinly veiled political statements (many of which inhabit the Milton section) also detract from Castillo’s first instinct: to cultivate a close study of a typical border town and its residents.

Castillo’s strength lies in the details—shaping a scene with sumptuous prose, deftly adding dimension to a character with an extended aside. By these details, Castillo’s characters bring body to contemporary struggles lost in the ephemera of the news cycle.

With the notable exception of the brilliant Beverly Fishman, who encouraged us to question all forms of painting, my education didn’t really consider the sides of paintings. They were painted white—that ever-problematic stand-in for neutrality—or stained by action on the front, but more often simply ignored.

It’s the evening of October 22, 1962 and President Kennedy has just announced in a televised address “that it shall be the policy of this nation to regard any nuclear missile launched from Cuba against any nation in the Western Hemisphere as an attack by the Soviet Union on the United States, requiring a full retaliatory response upon the Soviet Union.”

Robbins’ contributions and choreography in the original versions will forever be treasured, but De Keersmaeker has provided powerful, contemporary new dances that shine.