Theoretically, a story can be of any length, even as short as a sentence. But at that level, the definition of “story” breaks down, quantum-like, into unspecificity. Is it mere length that distinguishes a short story from an anecdote, parable, or sketch? These questions may cross your mind if you page through You Have Time for This, a collection of “short-short” stories edited by Mark Budman and Tom Hazuka. No piece in this anthology is more than 500 words, which makes it just long enough to read a bit during a TV commercial break or a trip to the restroom.

Bite-sized short stories have been flowering for a few decades now, under many names. The most popular ones, “microfiction” and “flash fiction,” can be used interchangeably. There are several websites devoted to the form, and more than one literary journal includes a passel in each issue. Meanwhile, grandiose claims are made for the sub-genre, especially on the Internet. Some critics refer back to post-modern experiments of the 1970s and ’80s; others associate flash fiction with the hyperlink culture of the ’90s; still others invoke the shortened attention spans and kinetic speed of the 21st century.

Flash fiction’s focus on format does seem particularly post-modern, and this sub-genre did proliferate in the deconstructive heyday of the late 1980s. The form had entered the mainstream by 1992, with the publishing of Flash Fiction: 72 Very Short Stories (edited by James and Denise Thomas with Tom Hazuka). These editors selected works no longer than 750 words, self-consciously announcing that a piece of flash fiction should fit on two sides of one page. 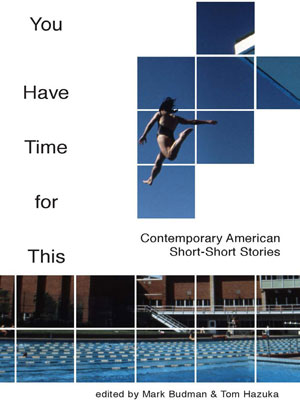 The more recent collection suffers in comparison with the earlier anthology. There’s less variety to the style and subjects of You Have Time for This, and less heavyweight talent involved. In the earlier work, the reader senses that jettisoning the rule of length has emancipated the writers. They find odder subjects, observe life with more insight and write with more depth, and seem more playful than the writers of the stories in You Have Time for This. Most importantly, the earlier writers find a variety of solutions to the problem of fitting an entire story into 750 words.

The writers of You Have Time for This seem more constrained than liberated by the limited word count (they have only 500 words to play with), and they fall back on similar solutions. The most common one, by far, is to sketch out a basic relationship between two people—usually a romance between a man and a woman—and to finish off with a one-sentence stinger that upsets the status quo.

There isn’t much action in these stories, so that when you do get a little, like a bar brawl, it’s an oasis. Mostly, these short-shorts tend to blend together, especially on reflection, because their length encourages the reader to consume many at once (which, like chocolate, induces a bloated, over-calorized feeling). The details that the writers favor are common observations about the physical world and especially the body. The collection becomes a blur of limbs and eyes of lovers and family members, or the warm pelts of favorite pets.

Only in a few cases—the transvestite surprise of Vylar Kaftan’s “Buddha’s Happy Family Jewels,” the futurist mechanical bigamy in Deb Olin Unferth’s “Maybe a Superhero”—does this style transform from dull observation into unique, story-driven material. Raymond Carver-like realism dominates the anthology, which becomes frustrating in its blandness and inactivity. And at this length, the minimalism begs the question of what constitutes a short story. Too many of these short-shorts are sketches: they lack that plot twist or epiphany that would make them into stories.

Occasionally, there’s a foray into genre writing— standing out is Justine Musk’s “The Story of You,” an LA noir that occupies less time than smoking a cigarette. Bruce Holland Rogers’s piece “Three Soldiers” is especially notable for being the only short-short in the collection to both address the war and to experiment with non-traditional form (each of the titular soldiers gets his own mini-short-short beside a bullet point).

If most of these stories don’t work in miniature, however, their cumulative effect is powerful. The multiple voices blend together and revisit the same themes, which benefit from the kaleidoscoping of perspectives.

Although You Have Time for This isn’t particularly substantial, it is inspiring. Hazuka and Budman address themselves as much to writers as to readers, especially in Budman’s introduction. They urge readers to try their own hand at writing flash fiction. Not only is it good practice for concision and editing, it inspires writers to question what’s essential to consider a chunk of words a story.

The Story of No One From Sri Lanka

Sri Lanka is just an island of 21 million people, still colonized by capital, still culturally self-colonized, and thus our sufferings are not unique. We are all ultimately just leaves in the stream, and right now the water is churning.