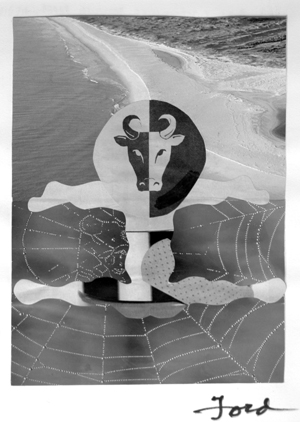 As I entered the Anita Shapolsky Gallery, it seemed like the space was actually a sophisticated writer’s studio, complete with a collection of artwork and books, a backyard patio, and an upstairs studio for painting and sculpting. But upon closer inspection, I discovered a treasure trove of the most unusual kind, a show that could be called “Art by Writers.” 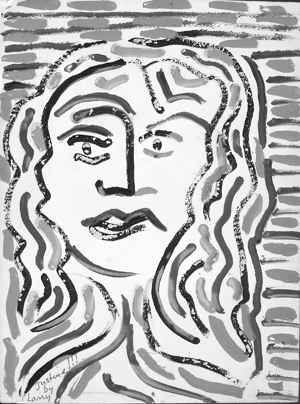 The exhibit is based on Donald Friedman’s book, The Writer’s Brush: Paintings, Drawings, and Sculpture by Writers, (with essays by W.H.Gass and John Updike) published this year by Mid-List Press, Minneapolis, and reveals for the first time the artistic side of well-known authors, whose works turns out to be surprisingly professional. 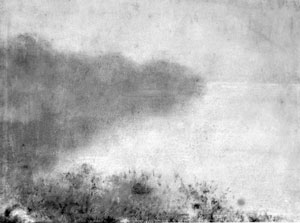 “The itch to make dark marks on paper is shared by many artists and writers… the impulse is one,” says John Updike in his opening essay of the book/catalog. The show includes 180 unique works by ninety-seven famous scribes, displayed in four rooms. The spectrum of the visual-narrative is complex and extensive, ranging from doodles, collage, and assemblage to drawing, painting and other modernist techniques.

Donald Friedman (author and co-curator) and John Wronski, (co-curator and owner of the Pierre Menard Gallery in Boston), have masterly gathered art from private collections, some never shown before, by a pantheon of writers, including thirteen Nobel laureates. The beautiful landscapes that Hermann Hesse credited with saving his life have a nostalgic-biographical atmosphere; the manuscript sketches that Fyodor Dostoevsky made of his characters reveal the visual process of literary creation; and the can-can dancers secretly drawn by Joseph Conrad serve as art-cum-memorabilia objects. Ultimately, these works gave me new insights into the lives and minds of my favorite writers and their creative processes.

These writer-artists quietly cross the borders into what I call visual-oralism or vis-oralism, with some, such as Henri Michaux or Unica Zurn, even practicing induced trance and recording it in chimera-like images and text.

Walking through the exhibit and leafing through The Writer’s Brush, one can discover, for example, that W. B. Yeats painted unusual watercolors to change his state of mind; before she became an established writer, George Sand supported herself as a painter; William Carlos Williams was inspired to paint by a friend from medical school; John Berger and Mark Strand were both art majors, and Henry Miller’s exuberant watercolors number in the thousands.

One small oil painting stands out, that of a “Cabaret Performer” (1935), a dancer in a sexually provocative pose with a moustache in place of pubic hair, being pelted with flowers. It is signed ee cummings.

Other highlights in a show full of them: Lawrence Durell’s “Justine!!!” (c. 1957)—the painting, not the book—its heavy watercolor strokes creating rhythms of vibrantly wavy lines.

Clifford Odets’s “Coming Snow” (1947) is a watercolor on paper of a shepherd with his flock, an image worthy of the New Yorker.

Djuna Barnes designed the cover of her famous “Ladies Almanack” (1928) about a predominantly lesbian social circle that focuses on Natalie Clifford Barney’s salon in Paris. It is written in an archaic Rabelaisian style, with Barnes’s own illustrations in the manner of Elizabethan woodcuts. Her cover illustration is borrowed from a popular image of an officer in front of four cavalrymen, but in her version there are four ladies on horseback waving a flag emblazoned with the book’s title.

Jean Arp wrote poetry, while his alter ego Hans Arp did sculptures and collages. Mina Loy was also an exquisite writer and visual artist, though not at the same time. Charles Henri Ford is represented here by a colorful collage, used as the cover of Milk Magazine No. 5, in which he and his followers published poems and prose.

Jonathan Lethem was trained as an artist until he moved to California and started writing novels. His abstract-impressionistic “Notebook painting No.1” has words painted into a landscape. And there’s so much more.

The show does not include artists who wrote books, such as Dali or de Chirico or the countless practitioners of concrete poetry and conceptual poetry. And the Beat Generation is a bit underrepresented here, with several major names such as Michael McClure, Gregory Corso, surrealist poet-collagist Ted Joans, street-painter-poet Jack Micheline, surrealist collage-novelist Norman Rubington and living legend Tuli Kupferberg.

That said, The Writers Brush is an invaluable resource for those interested in the interconnection between literature and art. The book is also a great resource in no small part due to its reproductions of great work that has been lost or destroyed over time.

When Dede Cummings founded Green Writers Press (GWP) in April 2014, she sought to use her twenty-five plus years of publishing experience to do something about the growing climate crisis.