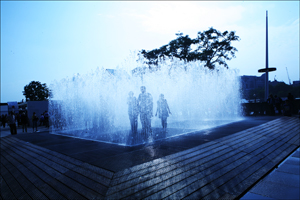 If you strolled onto the grounds of the Southbank Centre over the summer, you’d catch a flag by Tracy Emin emblazoned with “One secret is to save everything” printed over a field of swimming sperm. Around the corner, a sculptural group of what appears to be people growing out of chunks of basalt with water pouring from various orifices. The flag, the fountain—a sculpture by Klaus Webber—and this year’s Christmas “lights” by Anya Gallaccio are all part of the past year’s regeneration of the Hayward, the visual arts venue of the Southbank Centre on the Thames riverside in Central London; all of which is driven by it’s new director, Ralph Rugoff. A charismatic public speaker, he has recently said that he likes “things which have a connection to the world in some way…that reflect the times in which we live. That’s what artists do, they look at art history but they are also responding to the world in some way.” What does art do if not remind us of the largess of the world, and motivate us see it in a different light? Just perhaps the function of the curator then, especially in this moment of superstar curators, is to marshal these objects and enable those lights to become more perceptible.

In Scene of the Crime, his 1997 exhibition at the Hammer Museum in Los Angeles, Rugoff brought together artists as diverse as Ed Ruscha, Barry Le Va, Chris Burden, Karen Kilimnik and Vija Celmins under the concept of what he termed a “forensic aesthetic.” Instead of the work sharing formal or intellectual concerns, what “links them is the type of approach they demand from their audience. Taken as a whole, this art puts us in a position akin to that of the forensic anthropologist or scientist, forcing us to speculatively piece together histories that remain largely invisible to the eye.”1 Inspired by Ed Ruscha’s photobook Royal Road Test, in which the artist documented the act of throwing a typewriter out of a car, Rugoff traces an alternative idea of looking via the frozen, latent violence in the artworks of Vija Celmins and Robert Rauschenberg, and through the actions of Le Va (throwing pieces of felt and ball bearings), Burden (shooting), and even Yves Klein (evidence of performances as recorded in painting). In his thinking, the forensic eye applied to these artworks requires “a scanning gaze able to sift through the details of a scene, to shuffle fragments of information that seem only haphazardly related.”2 The resulting exhibition was one of his personal favourites, but more importantly it hands us, the viewer, the responsibility of interpretation.

Hence the curator-director’s various exhibitions before and since might be considered through this paradigm of sifting through artwork to piece together new “crimes,” and consequently to sharpen the viewer’s scanning gaze. It is as if Rugoff’s approach has been to provide the viewer with a fresh magnifying glass with each show. Certainly the visual arts of the past 40-years has shifted away from the existential introspection of post-war abstraction towards today’s more participatory aesthetic, and Rugoff’s practice has helped fuel the current zeitgeist for a more intelligent, audience-oriented exhibition-making. He writes that the goal in Scene of the Crime was “not to uncover some absolute truth, but to pose new questions about the history of postwar art and to tease from the familiar ones a few intriguing and overlooked clues.”3

Most young curators here in London come through a handful of curatorial programs (note that I myself have a curatorial fellowship located here at the Hayward where Ralph is the director) Rugoff on the other hand is of another generation, and even amongst them he is unusual in that he comes to exhibition organising from a journalistic background. Born in New York, the fifty-year-old is best known as a writer for his collection of essays on Los Angeles, Circus Americanus (Verso, 1995). Most of these articles were collected from his column on art in the LA Weekly, which Rugoff used as a space in which to meditate on the wider culture through ideas from art, anthropology and sociology.

Arriving in Los Angeles from New York, he found himself in a familiar if slightly distanced landscape known only through film or television. It was as if he “had entered a world seen only under glass.” This view of the world mediated through a lens, be it television, cinema, windscreen or vitrine, was something that he sought to comprehend. The result, though cleverly termed a “circus,” could be described as a considered understanding of West Coast Americana.

Whether interpreting Las Vegas through the perspective of mannerist art, drawing out the hidden depths of experience at “theme park slums” like the Alpine Village, expounding on miniature golf through notions of the picturesque (actually the opposite of that notion), or explaining the joys of the Museum of Jurassic Technology and demonstrating what it has to offer our museum culture, what Rugoff displayed in his writing is the opposite of his forensic thinking. While the forensic method could be described as having been imported from the general culture as a way to approach art afresh, Rugoff’s engaging essays enrich Kitsch experiences by considering them through the filter of art.

A graduate of Brown University, he maintains that one of the essential skills of a curator is the ability to write well and clearly, as opposed to a heavy handed theorizing. In fact he has frequently mentioned that he does not fully comprehend an exhibition until he comes to write the essay. It is perhaps Rugoff’s way of unpicking his clues, “you always discover things you never suspected about the show,” he says. For him there is a difference between curators who write and those who don’t, since writing helps one to think through the issues in each exhibition. It was also through writing that he came to be a curator. Rugoff was invited to curate a show of “pathetic art,” following a talk he gave on the “pathetic,” which referred to the sense of failure and ineptitude one can experience in a society obsessed with success. Just Pathetic (1990) was eventually followed by shows on invisible art, monuments, rock-and-roll, and sight gags, all unlikely subjects. Most of these shows were conceived for the CCA Wattis Institute for Contemporary Art in San Francisco, where he was director for six years and eventual winner of the first Ordway Prize for curating by the Penny McCall Foundation.

His arrival in London coincides with that of Hans-Ulrich Obrist at the Serpentine and the yearly expansion of the citywide party that is the Frieze Art Fair. Their presence marks a significant shift in the ever-expanding success of London as a major arts hub. Now rebranded the Hayward, it is London’s largest kunsthalle (“art hall”), an exhibition space without a collection. The gallery was conceived by the Arts Council—the British equivalent of the NEA—as a permanent venue for its exhibition programme and growing collection. Named after a local politician, Sir Isaac Hayward, and opened in 1968, the five galleries contained within this Brutalist structure never quite became a permanent home for the Arts Council’s expanding collection. It wound up instead programming large-scale exhibitions of major figures like Matisse, Van Gogh and Picasso, interspersed with mature contemporary British artists like Anthony Caro and William Turnbull. It was in the Nineties that the Hayward began to put on the large-scale thematic, trans-historical exhibitions (including shows on material culture, illusion, and art and film) for which it is currently known. Yet the opening of Tate Modern and the arrival of the highly market-driven YBAs largely overshadowed that shift. In many ways, Rugoff’s arrival at the Hayward is a statement of intent by the directors of the Southbank.

With the Hayward’s current exhibition, which Rugoff curated, The Painting of Modern Life, the new director’s program officially begins. It is an exhibition about painters who use photography, but these are not photo-realists. Rather, the are artists who depict late-20th century life via the photograph. Older artists like Gerhard Richter, Vija Celmins, Robert Bechtle, and Richard Hamilton, are joined by the relatively more youthful approaches of Luc Tuymans, Elizabeth Peyton and Wilhelm Sasnal. Once again Rugoff is asking us to realign the boundaries of our visual thinking. Notions of history and the nature of painting are gently called into question. But that is the beginning. In all probability, future programming will include major shows of Ed Ruscha’s paintings, Rodchenko’s photography, a Chinese outsider artist, and Tracey Emin, with group shows on themes like laughter or economics; an all-women show; and an exhibition of British painting curated by Matthew Higgs and Peter Doig. Don’t expect any of these to be in any way straightforward or simplistic; Rugoff has demonstrated a desire to encourage his viewers to think, to see and, just maybe, to feel. In his words, “the crucial task [is] providing a context for works of art so that they can catch viewers off guard, jump-start unexpected thoughts and insights and trigger moments of surprise and pleasure.”4 To return to the idea of forensic aesthetic, however, the exhibition in the end is placed in the hands of the viewer. Rugoff, the curator, is a believer in certain notions of participation. This is not in regard to a relational aesthetic; participation here implies showing up and looking. Piecing together the clues. In the end it is an idea of inclusivity, where viewer is given an opportunity to see creatively. To return to Duchamp, the viewer has to accept responsibility for generating half the art’s meaning; the result for Rugoff is that “group exhibitions can be truly successful only when we succeed in making our audience feel that they, too, are an essential part of the group.”5

4 Ralph Rugoff, “You talking to me? On curating group show that give you a chance to join the group” in Paula Marincola (ed.), What makes a great exhibition, (Philadelphia); p.50.

Lytle Shaw’s engrossing New Grounds for Dutch Landscape is a poetic revision of no less than two centuries of in-gazing art history. On the occasion of the book’s publication, the Rail has commissioned exchanges with some of Shaw’s interested readers.