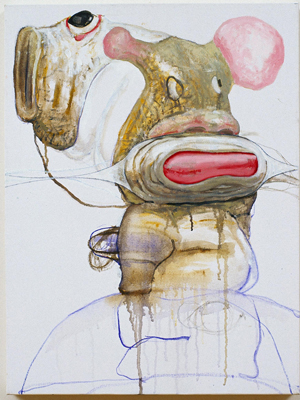 Peter Williams is a troubling painter for troubling reasons. There is a disconnect between his sophisticated paint handling—which can veer from dry pointillist dots to hard-sculpted tonalities to bejeweled washes and drips, all in the same picture—and the low-culture effrontery of his images. I use “low-culture” advisedly: I’m not talking about the id-driven and often disreputable populist art forms like comic books or horror movies that can jolt an aestheticized visual culture out of its self-reflexive doldrums, but the unrelenting corporate blight that is slowly turning our cities, towns and highways into soul-deadening swaths of homogeneity.

Williams’ depictions of Ronald McDonald, Mouseketeer caps and M&M’s, paired with blatantly racist and sometimes obscene imagery, feel like detritus scraped out of the tangled weeds of a brick-strewn vacant lot stinking of dead cats. They carry a disquieting authenticity, the eyewitness account of an African-American born in the early 1950s who spent a nineteen-year chunk of his career in Detroit. They are an indictment of the corporate atomization of our communities, particularly the inner city, poor, and black, into captive markets for junk food, cheap entertainment and military recruitment.

Many of the oil paintings in this exhibition, which brings together works from the past ten years, are uncomfortable to look at. Oblique autobiographical references resonate in puzzling ways against a panorama of collective tragedies, rendered in a cartoonish surrealism that dares not to be taken seriously. The compositions, often resembling stage sets cluttered with grotesqueries, feel wrong—skewed or ungainly or overbearing—as if the artist could never quite bring the picture’s emotional turmoil to a satisfactory resolution.

One of the most unsettling works in the exhibition, “Turbulence” (2003), incorporates two images of Ronald McDonald, one emblazoned on a soda cup, into a phantasmagorial depiction of the 9/11 attacks. According to a gallery handout, the artist actually started the painting in the summer of 2001, completing two stylized towers in the center of the composition before putting it aside. The rest of the picture, finished months later, is divided into comic-book-style frames filled with airplane seats and windows, an illuminated overhead sign reading “WHITE’S ONLY!” and stylized nose cones resembling red fingernails or clown noses that aim at one side of the towers and pop out the other.

This slapstick rendition of a still-raw psychic wound would be galling if it weren’t redolent of empathy, outrage and pity over a culture where meaningless commercial symbols clutter even our rituals of grief. Similarly, the unremittingly overwrought monstrosities populating “IraqIranIwon” (2005), “Green Zone” (2007) and “Maurice” (2007) are savage pokes in the eye rendered with a paradoxically light touch over a delicate pencil underdrawing.

William’s mastery of drawing is on full display in the six watercolors on view, which have a more compact and experimental feeling than the oils, as well as a more luminous sense of color. These evince the bumptious, anything-goes accretive energy of outsider art, yet they come closest to what could be considered a cohesive set of visual elements—that is, until something like the word “Detroit,” splashed across the center of “Leaving Detroit” (2006) in red, graffiti-style letters, breaks the picture plane and knocks the Diego Rivera-like composition off its axis. Williams’ formal anarchy, sometimes couched in imagery so unpalatable that it impels an involuntary step backwards, feels like a blunt repudiation of the redemptive power of art, writing off its capacity to structure and ennoble experience as nostalgic bunk.

While satirists like Peter Saul and Robert Colescott have parodied iconic works of the Western canon to press political points and undermine the notion of the masterpiece, Williams’ references to the history of art in such paintings as “Barcelona” (2004), “Brazil” (2001) and “Picasso, A’Tergo!” (2006) serve to heighten the contrast between the grand traditions of European culture and our own abject, consumerist lifestyle, while simultaneously implicating those same traditions in the corporatist and white supremacist power structures that have brought us the last six years of chaos, disaster and war. Williams’ naked assessment of the degradations wrought by malevolence and greed offers no excuses and sees no reason to differentiate its tragedies from its trash.

Williams’s exhibition, titled Tracing Memory, builds on the tradition of apostate picture-makers with such confidence that the fact that this is also her debut exhibition at a commercial art gallery in New York City comes as a surprise. Many of the works on view lack any support structure at all, preferring instead to migrate across the wall with a breezy randomness that belies their precise deployment of shape, color, and materials.

Aliyah Dunn-Salahuddin speaks with Luke Williams about working at the intersection of dance and history in academia. The two discuss overlooked histories of Black creative work; alternative methodologies for scholarship; and the importance of memory and ritual in artistic and academic endeavors.

Louis Block speaks with artist Rachel Eulena Williams about memory and transformation in her two solo shows, and finding order within disorder.