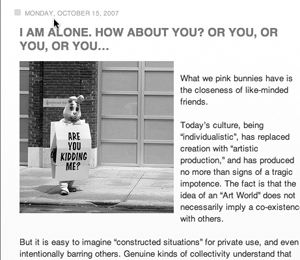 A recent post from the Chelsea Rabbit’s blog enumerates ideas about collectivity.

“Excuse me,” asked a young graduate student, “what is it you’re protesting exactly?” The person in the pink bunny suit gave no reply and continued pacing in front of an esteemed blue-chip Chelsea gallery, stopping on occasion only to adjust its sandwich board, which read ARE YOU KIDDING ME? Playing it deaf and dumb is Chelsea Rabbit’s M.O. and such encounters are the exception not the rule, as most Chelsea-goers tend to ignore the bunny while self-consciously sidling into their gallery of choice.

A number of paradoxes, coupled with the closed-off anonymity of the rabbit, act to draw the wary viewer in. The cartoonish bunny suit is a bit weather-beaten; but the sandwich boards are professionally printed. In the two years (at least) since the rabbit has been stalking the galleries, it hasn’t followed any regular schedule of appearance. The quips printed on the placards range from ironic truisms directed at gallery culture (Gallerists Aren’t Looking for a New Idea But Are Eager To Find Someone With a Lot of Something) to obfuscatory questions (I or Me You Choose?). Is this an offended party from within the Chelsea gallery circuit, an artist/activist with an ax to grind? Or are the gallerists themselves secretly executing an elaborate publicity stunt? The rabbit offers no fliers or petitions and makes no effort to stop anyone from going into the galleries—the performer’s anonymity seems to guard nothing.

It isn’t until one stumbles upon an elusive blog (http://chelsearabbit.blogspot.com) that any politics or authorship can be ascribed to Chelsea Rabbit. Currently the blog features two posts; one published recently and the other a thread (presumably from different blogs) stretching back to November 2005 with new entries every few months. Each post takes its title from one of the phrases on Chelsea Rabbit’s posters, and the ensuing texts are manifesto-like rants against the cultural establishment. Chelsea, it seems, is just a ‘red herring’ and the ‘pink bunnies’ assure us they have other operatives working other scenes. The pink bunnies rail against Post-Modernists as exploiting humanist ideology, the ‘Art-World’ as a paternalistic hierarchy, and institutional critique as a mere spectacle of refusal. I recognized some lines pulled directly from Henry Flynt, giving me to wonder if the bulk of the text wasn’t also plagiarized.

The bunny costume provides a tangible layer of anonymity while the blog’s authorship redoubles the confusion through a haze of textual anonymity. The last post reveals a group name for the pink bunnies: The Project for a New Neoist Academy. Luther Blissett, Monty Cantsin, and Karen Eliot are among the contributors to the blog; it may be safe to assume that the other names appearing under the postings belong to no actual person. These open source names, which were invented by Neoism (1979-86), can be embodied or used by anyone, thus critiquing notions of artistic ‘responsibility’ and unsettling Western identity-dependent ideals. The bunnies have also tried to deliberately misidentify themselves by carrying hints that lead to the New York art communities shadowy underbelly, hence, Membranofismo (which appears sometimes on the placards) the unsung art movement of a jilted assistant to Julian Schnabel.

By posing behind the trappings of the Post-Modern pathetic aesthetic (boring durational performance, innocuous one-liners, ironic pseudo-spectacle) The Project for a New Neoist Academy is hiding in plain sight. Therefore they are avoiding the mistake, perhaps, of the Guerilla Girls, who wanted to “change” the hegemonic patriarchal art-market instead of avoiding it all together.

In this sense Chelsea Rabbit acts as a sort of beacon to wayward travelers–if they can find the blog, and if the elements of a ‘misguided’ or ‘misunderstood’ protest engage them enough to put them on that path—they may feel more empowered by the collective’s message as opposed to feeling victimized by unsolicited preaching. The blog, however, offers no method to interface with the group or join their ranks, and its blustery tone may be inappropriately calibrated to discourage anyone who reads it from visiting Chelsea and the recruiting pool they’ve discursively labeled a “sliver of pomp.”