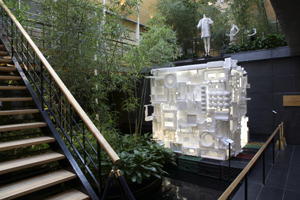 Like any exhibition curated on the basis of a common theme or cultural background, the intentions among or between the artists are rarely identical in spite of the concept governing their selection. Established and emerging artists of considerable diversity are shown in relative proximity, with good artists conceivably presenting unclear or uncertain work and presumably mediocre artists showing very good work. Amid the multitude of aesthetic and conceptual differences, the unexpected is a given, and sometimes the unexpected is revelatory. I am thinking of Yoshiaki Kaihatsu’s “Happo-En in NY 2007 (Teahouse)”, a fantastic, imaginative dwelling built from discarded polystyrene foam, plywood board, and milk crates. The florescent lighting is a bit obtrusive for my taste, but the concept of taking various packaging and shipping materials that would otherwise be discarded and affixing them together is brilliant. In this work, Kaihatsu takes a turn away from the preponderant anti-ecological concept of “the brand new.” This turn away from pre-ordained assumptions about how we are programmed to think as consumers in our globalized environment is a central issue in Kaihatsu’s work. He is seeking an alternative that focuses on recontextulaizing the detritus—in his case, packaging materials—made evident by consumerism. This process of recontextulaizing materials and ideas is a prevalent underlying theme among many of the artists included in the exhibition Making a Home: Japanese Contemporary Artists in New York, currently on view at the Japan Society in New York.

To generalize about a temporary exhibition of works by thirty-three Japanese artists is not an easy task. Biases may appear for unknown or speculative political or ideological reasons. Even so, the curator, Eric C. Shiner (with his associate, the art historian and essayist, Reiko Tomii) has organized an exhibition that goes beyond the concept of a survey in order to present a thematic discourse that pulls together the often separated concepts of living and working in a particular place, in this case, New York. Instead of separating life from art, Shiner emphasizes the work of artists engaged in living/working. From a conceptual perspective, the habitat becomes the studio and the studio becomes the habitat. Thus, the commonality of the theme makes this exhibition easy to navigate as the connections between the various works seem, for the most part, plausible. Shiner—who speaks fluent Japanese—points out in his highly accessible and articulate catalog essay that the artists in this exhibition are not simply asserting their identity as Japanese artists, they are searching for means to merge their origins with their present circumstances of living in New York. This is a highly complex affair not only for the second or third generation of Japanese-American artists, but especially for more recent immigrant artists who work often without the subtle maneuverings of art world support as prescribed by the privileged art world elite in New York. The fact that a group of Japanese artists hit the New York art world in the late fifties, shortly after an earlier generation of Chinese artists, and two decades before the Korean presence became known in the late seventies, is reason enough to examine this exhibition not only from an historical perspective, but also from semiotic and psychological perspectives via acculturation—that is, how Japanese artists absorbed new signs and symbols into their work that came to distinguish it from that of other East Asian artists.

Shiner has several sub-themes that he works with in Making a Home, such as “Building Environments,” “Intimacy and Identity,” “Coping with Loss,” “Meditative Space,” “The Process of Making,” and “Referencing the Landscape.” This kind of taxonomy lends structure to the exhibition, but also creates ambiguities (not necessarily negative) about what some of the artists are really trying to say. For example, Ei Arakawa’s video “Make Your Name Foreign” (2005) has a certain edge both in its message and in its cinematic style. By deconstructing the earlier, lesser known cartoon-style drawings of On Kawara from the fifties, while he was still living in Japan, Ei Arakawa implies a leftist political aspect to Kawara’s better-known work of the mid-sixties that is often understood by American and European critics as “purely conceptual.” The filmmaker does this by showing a group of younger Japanese artists working on simulated works—namely the black and white “date paintings”—then cutting them up into fragments. This process suggests a physical act of deconstruction as the overdubbed narrative explains its political connections. This deconstruction of the work an important conceptual artist, such as Kawara, offers important means to decipher the contributions of other conceptual artists like Weiner, Barry, Huebler, and Kosuth—all of which were working during a highly politicized and transitional period of the United States.

In a room directly adjacent to Kasahara’s is a dimly lit installation of cast elephant parts by Hiroshi Sunairi. Sunairi’s placement of the elephant parts emphasizes the spatial relationship between them, but the piece is really about the space that one enters. One may draw a metaphor from the vernacular concept of a “white elephant,” which is, in fact, the title of the piece. Does it also carry political connotations? Perhaps, but Sunairi’s sculptural installation is truly about sculpture in the visual and formal sense, lending a sensibility that is as much classical as it is humorous.

Noriko Shinohara’s sketchbooks of an erotically charged woman, known as “Cutie,” often in the role of a cartoon-style dominatrix, pull together Eros with a kind of feminist humor, maybe representing another kind of loss. These delightful creations, installed in three wine-bottle boxes, are exorcisms in which Shinohara releases sexual angst in the form of a coy rage towards her husband’s philandering and debauchery, invigorating the nude or scantily clad body of “Cutie” with a traditional style of brushwork. Ironically, her husband, Ushio Shinohara, is included in the exhibition with his “Boxing Painting” (2007), which is one of his expressionist-styled works that he repeatedly punched with boxing gloves dipped in black paint. Apparently derived from the early days of Gutai—a performance group situated in Osaka in the late-fifties and sixties—Shinohara has revived this absurdist tradition in which the action turns on itself instead of an opponent, a salient statement on the internal psychology of the “other” used in traditional martial arts.

Another work apparently derived from this absurdist tradition—and that also incorporates Eros with loss—is Ayakoh Furukawa’s “100 Ways to Torture the Innocent” (2006-07). This series of graphite drawings began when the artist returned to her home in New York from Japan to find that her beloved hamster had died. The drawings that ensued are weird permutations, if not kinky exploitations of the little runt as he is pulled, twisted, hung, and brutalized in various ways. They are meticulously rendered and superb in their even-handed and fierce stylization. The conflict between loss and Eros is held in suspension as the imagined machinations of the hamster lend themselves to an allegorical narrative in ways that are truly tragic-comic. As with the rest of this engaging exhibition, Furukawa’s psychological insight and penetration open a door to the unknown through which many Westerners—with the possible exception of the 17th Spanish Baroque artists, such as Goya and Josep Ribera—would not dare to tread.

Robert C. Morgan is a non-objective painter who lectures on art and writes art criticism. In 2017, he was given an overview of his career as an artist at Proyectos Monclova in Mexico City. Known primarily for his writing and curatorial projects, Morgan has published numerous books and catalogues internationally, now translated into 20 languages. His anthologies of criticism on Gary Hill and Bruce Nauman were published in 2000 and 2002 respectively through Johns Hopkins Press.