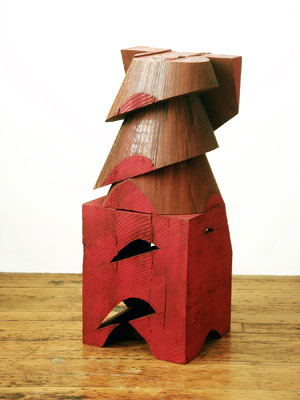 Simplicity in a work of art can shock. It has been mistaken for crudeness as with Courbet’s reductive brand of realism; for arrogance as with Duchamp’s readymade; and for mere inadequacy as with Judd’s early work. In each case, an artist’s insight into how art could communicate more clearly caused viewers to balk. Is this sort of response still possible? In the age of Jake and Dinos Chapman it seems a little retardataire to be shocked by mere simplicity. But we need to differentiate. It is one thing to be appalled by what you’re looking at—to be so affected by imagery of pain that you turn away in horror. It is entirely something else for succinctness to jolt your mind into a heightened state of consciousness. These are very different kinds of shock. Although I do not wish to cast aspersions on the former, which has been a legitimate mode of expression since Matthias Grünewald and the Isenheim Altarpiece, it is on the latter that I wish to concentrate regarding the sculpture of Mel Kendrick.

Kendrick’s installation at David Noland is entitled Red Blocks and consists of ten carved wood abstractions in two small rooms—nine in the front and one in the back. About the right height for sitting, the nine red works are set in an L-shape along the wall of the front room. The tenth piece, by itself in the rear room, is nearly six feet tall, a larger, somewhat scruffier version of its relatives. Unlike the smaller sculptures whose joints are finessed, the abutments in the large one are visible around swaths of thin, luminous, green paint. All the sculptures are made in the same way: a geometric design is inscribed on a solid rectangle of wood which has been painted with Japan color. The block is then incised along the surface line allowing Kendrick to carve out the topology of an interior mass which is then excavated and placed atop its negative mold, doubling the height of the piece. These are simple, vertical translations in space. There is no rotation, which would cause the top to the sculpture to pivot in relation to its base, or inversion, which would flip the top half of the sculpture in relation to the bottom. There are just the positive guts of the block placed evenly over its negative husk.

This simple puzzle, once decoded, allows you to get a bead on Kendrick’s understanding of space and to move with him as he feels his way from the two-dimensional surface of each red block to the 3-dimensional mass of its interior. This is traveling on intuition into unknown territory, like a roller coaster in the dark. Shock can be an insight so strong that it makes the raised eyebrows and wrinkled noses of reacting to mere effrontery seem like child’s play. Kendrick’s art is indebted on the one hand to the emphasis on touch brokered by New York School artists of the de Kooning ilk and on the other to the constructivist rigors of the minimalist art that nudged its way into dominance in the 70’s. His work is strictly constructed with a soft touch. It does not overawe (it never set out to), it seduces.